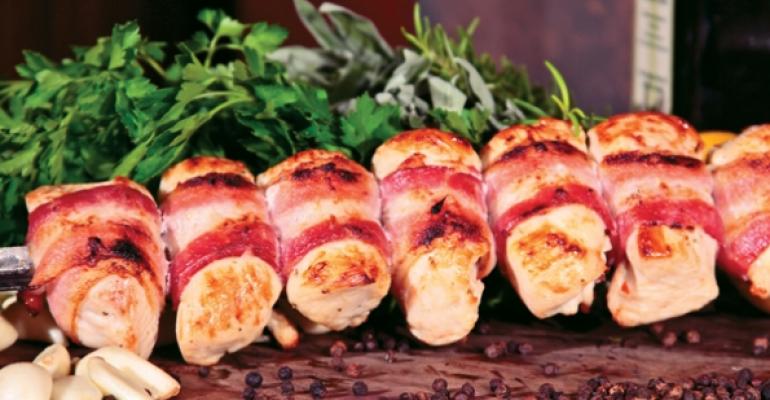 While the troubled economy has forced many chain operators to curtail their expansion plans, Texas de Brazil executives insist that the downturn has helped to fuel growth of the Brazilian-American churrascaria brand.

With 26 units currently open, the Dallas-based upscale chain is planning to nearly double its count by the close of 2014, said Anil Sekhri, director of operations.

“In this economy there are a lot of good deals to be had,” he said. “People are willing to negotiate and provide better terms for businesses. At the same time, a lot of restaurants are folding, and there are spaces available. It’s all a matter of taking advantage of the good deals.”

In addition, Brazilian churrascaria-style restaurants are underrepresented in the U.S. marketplace, Sekhri said, noting that Texas de Brazil’s closest competitor is Fogo de Chão, which also has only about two-dozen units in the United States and Brazil.

Funded by existing capital and cash flow, the well-reviewed 14-year-old chain is looking to open company stores in every major urban market around the country. Current plans call for outlets to open across New York State in such cities as Buffalo, Syracuse, Albany and New York. The company recently opened in a mixed-used retail mall in Yonkers, N.Y., just north of New York City.

International expansion is being pursued through licensing agreements, said Candyce Hedlund, director of marketing and public relations. Locations currently are open in Puerto Rico, Aruba and Trinidad, while talks are underway to locate branches in South Korea.

Malcolm Knapp, president of Malcolm M. Knapp Inc., a restaurant consulting firm based in New York, said Texas de Brazil does “a very good job.” He added, “There is definitely a market [in the United States] for Brazilian churrascaria-style dining.”

But, he said, “[Texas de Brazil is] an upscale brand, so it can’t go everywhere. It needs the right location.”

Once guests have been seated, they’re invited to visit the salad area, which offers between 50 and 60 hot and cold items. Selections include artisan breads, imported cheeses, steamed asparagus with strawberry sauce, Brazilian hearts of palm, grilled portobello mushrooms, shrimp salad, Italian salamis, pork black beans, jasmine rice and soup of the day. Guests can return to the salad area as many times as they want.

Once guests have completed that course, they flip a two-sided food card on their table to the green side, which summons a carver — also known as a gaucho — who offers a range of selections, including several cuts of beef, as well as chicken, pork, lamb and sausage. The meats are freshly carved tableside, and most are served on skewers. Once the guests have ordered, they flip the card to red, which signals that they are done for the time being. However, they can call the carver back any number of times by displaying the green side again.

“The guest is in control of the speed of the dining experience and what they’re getting,” Sekhri said. “People can select whatever they want and as much as they want. It allows them to sample everything, if they choose.”

The meats, which are prepared simply, usually using just salt and pepper, are cooked over natural woods and coals. Chicken and pork are marinated for 24 hours.

Sekhri said Texas de Brazil also relies on servers who, like the carvers, interact throughout the meal with the guests. In addition to explaining the concept and how the various meats are prepared, servers are trained in wine and beverage service and make recommendations to the guests.

“We pride ourselves on our level of service,” he said.