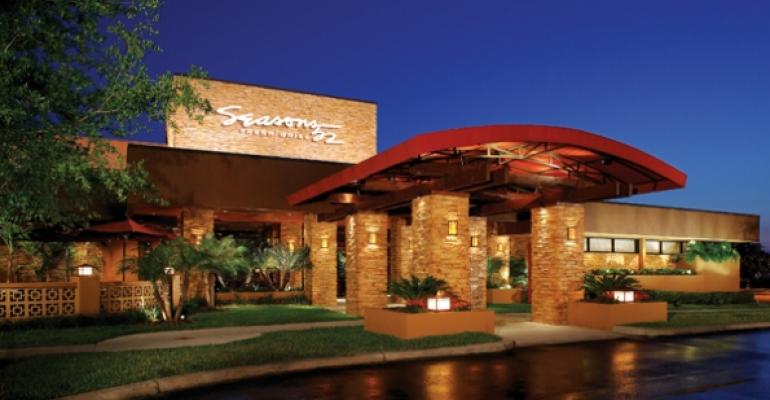 When the idea for Seasons 52 was being tossed around in 2003, the brand aimed to provide guests the opportunity to indulge while still eating well. The result: a dining experience aimed at baby boomers who were eating out more and wanted lighter fare.

All that said, Seasons 52 has never heavily marketed its healthful bent. While all items have 475 calories or fewer, the focus is on a seasonally inspired, chef-driven menu that changes four times a year.

Foye said three factors, in particular, appeal to guests: “a culinary-forward menu that uses fresh ingredients and flavorful cooking methods like wood-fire grilling, our people and the warm hospitality they offer guests no matter what the occasion, and finally, our international wine list as curated by one of the few master sommeliers in the world.”

“Every week of the year we strive to feature the freshest ingredients at the peak of ripeness and flavor, and offer them in ways that showcase our culinary art and creativity,” Foye said. “Our goal is to be a forward-thinking restaurant that defines the fresh grill and wine bar segment of full-service dining. We consider ourselves to be a ‘change’ restaurant.”

Growth for the concept, part of the upscale collection of restaurant brands in the Specialty Restaurant Group at Darden Restaurants Inc., was gradual during its first seven years. Units were opened only in the Florida and Atlanta markets during that time.

In 2010 expansion ramped up because not a lot of other high-end restaurants were being built following the economic downturn, Darden officials said at the time.

“During its development phase, Seasons 52 evaluated a variety of trade areas, residential environments and restaurant footprints,” Foye said. “The fresh grill and wine bar has gained popularity in each of its different locations so far, attracting adults who appreciate the food quality, wine selection and stylish ambience.”

Bonnie Riggs, a restaurant industry analyst for market research firm The NPD Group, said she believes catering to baby boomers was the key to the concept’s success.

“They are in a unique place because they offer choices,” Riggs said. “Consumers are looking for the right portions, the right price, right size, and theirs are all small so people can try new and different things. You don’t see that concept many places, which is surprising. It’s not just boomers, but all people want that now.”