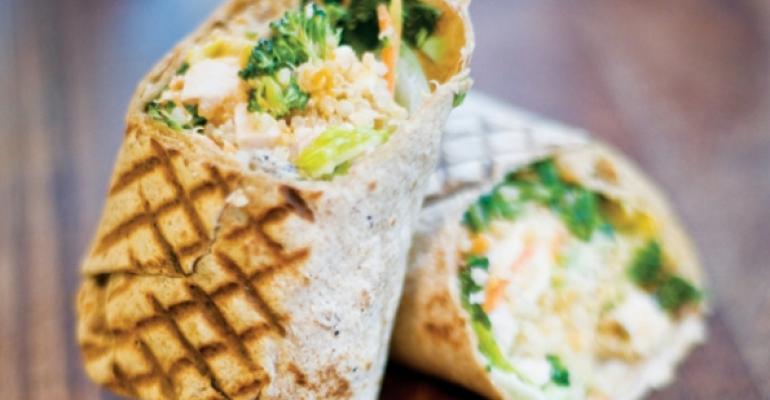 Like any serious fitness buff would adjust the weight on a bench press for maximal gain, Protein Bar founder and chief executive Matt Matros is reconfiguring where his eight-unit fast-casual chain puts most of its muscle in 2013.

The 33-year-old, who lost 50 pounds eating the high-protein diet that drives Protein Bar’s menu, started four years ago with a “10-10-10” plan to have 10 locations in 10 markets within 10 years. But after seeing so much success in Protein Bar’s home city of Chicago — including the first suburban location in Oak Brook, Ill. — and its first unit in Washington, D.C., this summer, he decided to pump up fewer markets.

“I don’t know about 10 cities anymore, but there is plenty of room to penetrate Chicago and D.C., so it could be more like 20 units in five markets in 10 years,” Matros said.

“We’ve realized that we’re not just an urban concept anymore,” Matros added. “I would have said no way to Oak Brook or Schaumburg, Ill., six months ago, but the evolution of the brand and the number of people seeking options like ours is expanding outward.”

Recent consumer research confirms there’s growing interest in healthful foods, such as Protein Bar’s “Bar-ritos,” quinoa bowls and smoothies. According to Chicago-based Technomic Inc.’s 2012 “Healthy Eating Consumer Trend Report,” 64 percent of consumers surveyed said they agree it is important to eat healthfully, up from 57 percent in 2010.

It helps that Protein Bar-inclined baby boomers could be a reliable demographic in the suburbs, where the chain likely would find fewer Millennial customers than in its urban locations, Tristano said.

“In order to be successful, Protein Bar has to appeal to suburban marketplaces,” he said. “But it has broad appeal based on its flavor profiles. Its food is not experimental or too adventurous, and it’s certainly craveable and allows customers to feel good.”

Matros said he learns a lot by operating in different markets. About 80 percent of transactions in downtown Chicago are carryout, while the Oak Brook location has more dine-in traffic and a smaller lunch rush that gets partially offset by the fact that more people come to eat there in groups.

Customers in Washington are more likely to order multiple items, which produces a slightly higher average check, he said.

One challenge is staying ahead of customers and their dietary needs, Matros said.

“It’s always about offering choice,” he said. “It’s funny, what’s healthy for me isn’t necessarily healthy for you. We don’t need a Paleo Diet menu or gluten-free menu, but we need those options, and that’s been a constant from day one.”

Operationally, certain aspects of the ordering and delivery process are dictated by space constraints; where one downtown store in a small footprint just takes customers’ names and calls them when orders are up, other locations use pagers. Regardless of the means, however, the end goal is always meeting guests’ needs for healthful food, fast, Matros said.

“What changes in one store may affect five sites we have under construction now, so I’m tearing back through our blueprints and changing this, this and this,” he said. “It adds up, but if it cuts a second out of the ordering process, then it’s easier for us and our customers and is the right thing to do.”