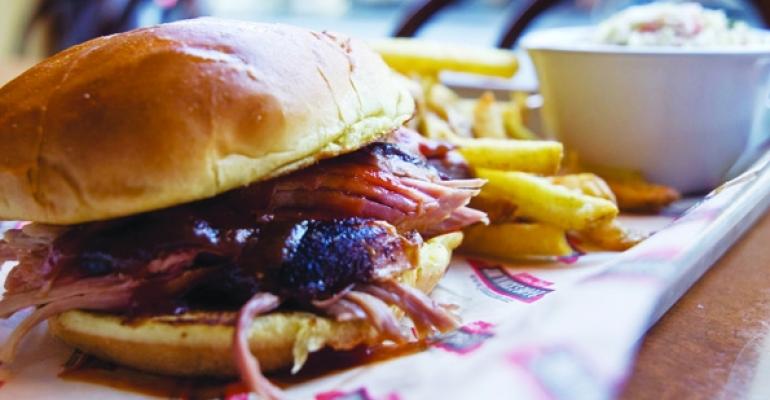 Jim ‘N Nick’s Bar-B-Q has emerged as an innovator in effecting change in the national food system through a combination of networking with the farm community, devotion to high-quality food and a state-of-the-art inventory and personnel-management system.

Founded in 1985 by Nick Pihakis and his father, the late Jim Pihakis — and who were later joined by Nick’s brother, alsonamed Jim — the restaurant originally focused on the slow-smoked pork shoulder that is the cornerstone of its style of barbecue.

Finding that 70 percent of its business was at lunch, the concept expanded the dinner menu to appeal to a broader customer base, eventually adding items like salad, prime rib, catfsh and non-barbecue sandwiches to the menu.

According to Nick Pihakis, what differentiates the brand is its wood-fired grill and never-frozen ingredients.

“We start everything from scratch,” he said.

Given the wide variety of menu items and the fact that the chain’s signature pulled pork has to be smoked for the better part of a day, inventory management has been essential.

“When you have a recovery time of 20 hours, you can’t run out,” Nick Pihakis said. Anticipating that need — and also happy to take an infusion of cash — the Pihakises partnered with Wendy’s franchisees John Michael Bodnar and Wayne Lewis in 1992.

“It was an opportunity for us to find young entrepreneurs like Nick and provide financial capital and intellectual capital,” said Bodnar, whose Atlanta-based company, Restaurant Technology, also developed Wendy’s back-office system in the 1980s. Bodnar said that system was the basis for what they developed at Jim ‘N Nick’s, although the chain’s more sophisticated menu required a more sophisticated system.

Bodnar said he created an “ideal cost system,” which calculates the inventory and labor required for each menu item, as well as a recipe book that’s on a tablet computer in each location.

Jim ‘N Nick’s remained small while these systems were being implemented, developing a prototype store for its fourth unit in 1997 and then opening another unit every 18 months or so until 2007, when six restaurants opened in a single year.

Then the economy went south, and Jim ‘N Nick’s stopped expanding until 2012, when it opened three locations and logged its best year on record.

“We’ve bucked a lot of trends, and we feel like we’re on a good path going into 2013,” Nick Pihakis said.

Part of that path is improving on the chain’s food. Jim ‘N Nick’s is aiming to use more free-range pork by working with several local farms to develop its own breed of hog.

John T. Edge, director of the Southern Foodways Alliance, which celebrates and promotes Southern food culture, said that in the process of developing these hogs, Nick Pihakis has connected barbecue pit masters with fine-dining chefs, academics and “obsessive consumers.”

“When you talk about breeding a better hog, you’re talking about going back to the hog of the consumers’ grandparents,” he said. “It’s different from saying ‘farm to table’ or ‘heirloom pigs.’ It’s different from the Berkeley and Brooklyn mantra.”

Breeding the pigs locally evokes the culinary heritage of the region, which says, “‘this is your hog,’ and also, ‘this is your grandparents’ hog,’” he added.