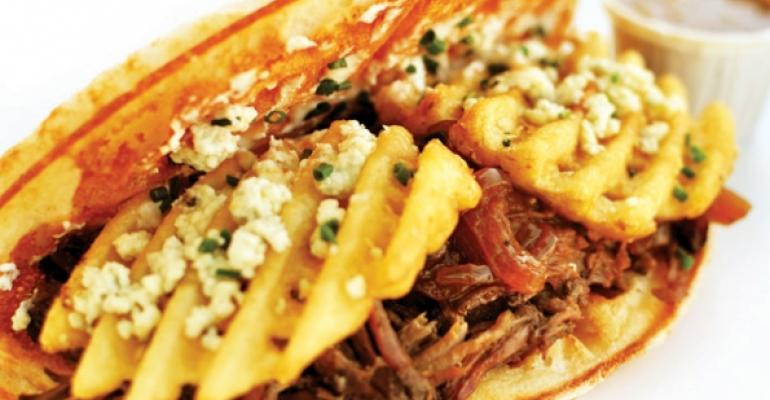 In a crowded field of fast-casual sandwich players, a new concept out of Southern California has found a clever way to stand out: by using waffles instead of bread.

The four-unit Bruxië is known both for its traditional syrup-dosed breakfast waffles and a full lineup of innovative savory sandwiches whose fillings are tucked into a folded, Brussels-style — read non-sweet — waffle.

After making its debut in a 420-square-foot hamburger stand in Old Towne Orange, Calif., in 2010, the concept has proven a hit.

Created by partners Dean Simon and Kelly Mullarney, Bruxië is a three-daypart concept averaging more than $2 million in 2,700 square feet or less.

“I thought of it as more of a food truck menu, but I was hugely mistaken,” said Luna, noting that the concept was named as having the Best Sandwich in the newspaper’s annual Best of Orange County list last year.

“The brand works because the food and service are incredible,” Luna added. “If they find the right ‘A’ locations, I think they can make it outside their core market.”

The idea behind Bruxië came from Simon, who previously operated a company that made waffle mixes for restaurants and hotels. On a trip to Indonesia, Simon said he was inspired by street foods that included savory fillings inside what Americans know as pancakes. He thought: Why not do the same for waffles?

So he and Mullarney, a chef and menu consultant, decided to design their own concept. The two developed a crispy and surprisingly light waffle made with yeast — the Brussels style — as well as a sweet Liège waffle, a denser version with chunks of caramelized pearl sugar.

Those became the basis for a menu that includes sandwiches like the Bruxië Burger, an Angus beef patty with Cheddar, tomatoes, pickles, mayonnaise and lettuce; the Green Eggs & Ham, with grilled ham, Cheddar, a fried egg, mayonnaise and arugula pesto; and a Roasted Mushroom & Goat Cheese, with basil, arugula and balsamic reduction. Guests can also build their own offerings.

Sandwiches are served with waffle-cut fries, of course.

On the sweet side are Nutella & Bananas With Sweet Cream, Seasonal Crème Brûlée and S’Mores waffles. There’s also a line of milk shakes, coffee drinks and soft-serve frozen custard from Wisconsin.

Simon said it took time to educate guests about the idea of a savory waffle, but foodies have embraced the idea, as is evident from lines out the door.

The first two locations of 2013 are scheduled to open in April in Huntington Beach, Calif., and in June in nearby Irvine, Calif.

So far the company has tapped individual investors. There are no plans to franchise.

“Once we get to Irvine, we’ll start to make decisions about 2014,” Simon said. “Growth will be largely dictated by our ability to recruit great people.”