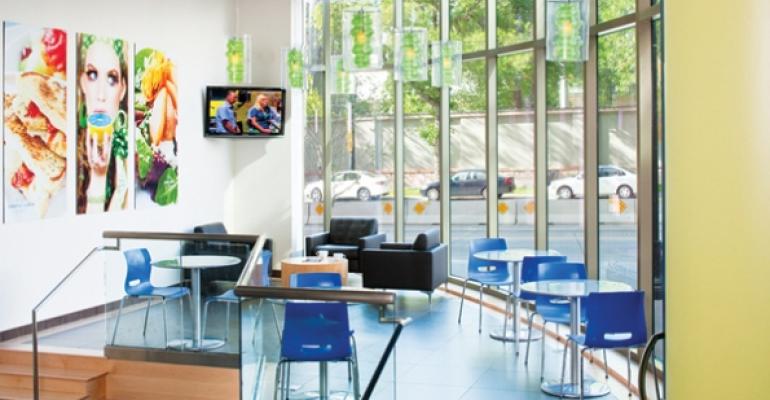 Blue Lemon originally was envisioned to be a restaurant where Lychelle Day could take her family for a healthful vegetarian meal near her home in Highland, Utah, a rapidly growing suburb of Salt Lake City.

For years residents of the tiny, affluent Highland area had to drive about 30 miles north to Salt Lake to find restaurants offering anything resembling healthful food. But as the stay-at-home mom watched the area almost double in size from 8,500 residents in 2000 to more than 15,500 nearly 10 years later, she decided that Highland could support a few restaurants of its own.

It didn’t matter that she had no restaurant experience and neither did her husband, Aaron, who worked for a tech company. Nor was she frightened by the fact that the United States was entering a deep recession.

Since then, Lychelle Day’s original modest idea to open a restaurant showcasing healthful food with a twist has rapidly evolved into a growing three-unit chain. Shortly after the Days opened their first Blue Lemon in 2009, developers came knocking at their door, inviting them to open in City Creek Center in Salt Lake City.

“We’d been open just three months at that time,” said Aaron Day. “But the location was across from Temple Square, the No. 1 tourist destination in Utah, and we couldn’t turn it down.”

Blue Lemon’s second branch, which debuted in 2010, also took off, and a third, 4,000-square-foot location with seating for 140, was opened midway between the first two in 2012. Today Blue Lemon’s average unit volume is about $2.4 million, said Aaron Day, who now runs the restaurant company while Lychelle cares for their four children.

The concept was not without its early challenges, however. Lychelle Day wanted to open a vegetarian restaurant, but Aaron Day convinced her no male would be caught dead walking into such a “hippie food joint” — at least not in Utah. So they switched to a menu highlighting clean, artisanal food served fast. But they quickly discovered they were unable to execute on the ambitious menu in a timely manner, and concluded they needed help if they were going to be successful in the long term.

As a result, they sought help from chef Todd Leonard, who helped them develop a menu that they could deliver on consistently. Dave Prows, whose experience includes serving as executive chef at Gastronomy, Salt Lake Brewing Company and Little America Hotel, joined Blue Lemon in October 2012 and is now helping to guide the chain to the next culinary level.

Blue Lemon also offers espresso drinks, smoothies, baked goods and desserts. Guests order at the counter and then sit down at tables, where servers wait on them. The restaurants are large, colorful, clean and bright, with blue as the main accent color.

Darren Tristano, executive vice president of Technomic, a Chicago-based research firm, said the Days have devised a healthful concept that appeals to women.

“The way they approach their food and the way it is prepared is very elegant — from the hand-blended soda to the way food is served.”

Blue Lemon’s target market is similar to that of Red Mango and Pinkberry, which have done well with younger women aged 15 to 34, Tristano said.

The company also is looking for a strategic partner to expand outside Utah, he said. At that point, Blue Lemon is expected to expand from its six-day-a-week operation to seven and will add alcoholic beverages.