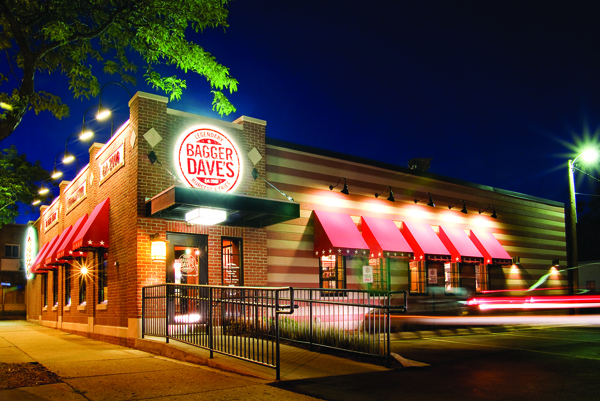 Bagger Dave’s Legendary Burger Tavern entered the better-burger fray six years ago and won over guests by inviting them to customize their own burger from fresh ingredients, pair it with a local craft brew or a drink from the full-service bar, and enjoy their meal in a relaxed, family-friendly atmosphere.

Today, with 12 locations open, the Southfield, Mich.-based company is hoping franchisees also will embrace the corner-tavern concept, which is set apart from its many better-burger competitors by offering table service.

Guests are welcomed into a 4,000-square-foot space decorated with local historical photos that have been blown up into wall murals, and a train that runs on a track suspended from the ceiling. They order by filling out a checklist, choosing from, among other options, beef, turkey or black-bean burgers, and more than 30 toppings — from sauces and cheeses to a fried egg or green olives.

Using fresh food “is a difficult thing to pull off, but very, very important to us,” Curtis said. “We work with more than 30 different Michigan companies.”

The company begins this year with 11 corporate locations and one franchised unit.

Eight new Bagger Dave’s branches are slated to open in 2013, a number that could increase depending upon how many franchisees the company signs, Curtis said. Bagger Dave’s plans to open 35 locations over the next five years through a mix of corporate and franchised units.

“If you are [a] better-burger [concept] today and don’t have alcohol, you might be missing the boat,” Tristano said. “The trend in customization has hit burger chains, and they have certainly given consumers more control and freedom about how they have their burger.”

Bagger Dave’s also benefits from having an experienced management team running its publicly traded parent company. DRH is the largest franchisee of Buffalo Wild Wings, with 30 units, and executives are familiar with franchising and expansion in the Midwestern marketplace.

At the three Bagger Dave’s units that have been open long enough to have the metric measured, same-store sales grew 9.4 percent for the nine months ended September 2012, according to DRH’s latest financial results.

While the need to get a liquor license makes the franchisee barrier to entry a little steeper, Bagger Dave’s $10- to $12-per-person average check, as well as its table service, puts the concept in an attractive niche between fast casual and casual dining. Millennials and older, more affluent consumers with discretionary income to spend are looking for an upscale experience and flocking to the segment, Tristano said.