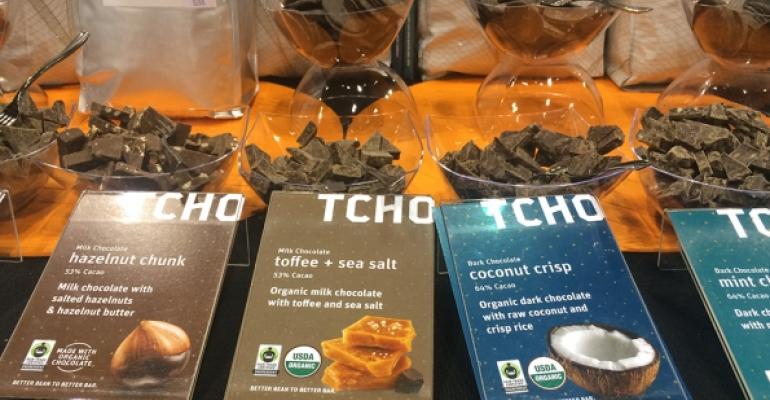 Thorn and Kruse talk culinary trends from the NRA show

Kruse Company president Nancy Kruse says this was the year of the alternative.

As I write this, Bret, my feet are aching and my head is spinning, both telltale signs that we’ve weathered another National Restaurant Association show. This year’s edition was a real doozy; with 2,200 exhibitors in a whopping 650,000 square feet, it was the best in recent memory. It was chockablock with innovative features and interesting exhibits, and while it usually takes me some time to decompress and think about the big themes, a few are immediately top of mind.

This was clearly the year of the alternative. A continuing motif through recent shows, it was really amped up this time around. Everywhere you looked you saw substitutes for meats, sweets and wheats. The gluten-free frenzy roars on, with the show directory listing 136 exhibitors in that category, an increase of roughly 30 percent over last year and a good indicator of its movement from dietary niche to mainstream lifestyle. Vendors responded with a dizzying array of ancient grains like teff, sorghum and amaranth. There were oats, flax and hemp, too, which have also been around a long time. There was a sugar replacement made with monk fruit and chicory, and a cow’s milk stand-in made from macadamia nuts grown on free-range trees in Australia.

Plant-based foods are a real hot-button trend on menus this year, and they were trending at the show, too. A company called True Made Foods run by a duo of “vetrepreneurs,” former army officers, makes barbecue sauce, ketchup and a zesty version of Sriracha called Veracha from whole vegetables like carrots, spinach and buttermilk squash.

It was also the year in which Eastern Mediterranean and Middle Eastern cuisines really broke through. For most American diners, the Mediterranean starts in Italy and goes west; they’ve paid very little attention to the tasty and attractive foods from Greece and points East. It appears that’s about to change.

Chickpeas are definitely having a moment, and they appeared as snacks, breadcrumbs, pasta and aquafaba — chickpea liquid that substitutes for egg whites. There was lots of hummus, including one that’s packaged in a to-go cup with chicken for a protein-rich snack, and also falafel, notably the very tasty Falafel Poppers with fillings like cucumber dill yogurt on offer from TaDah! Foods. The company donates 25 percent of its proceeds to worthy non-profits, which is right in step with Millennial consumers’ demand for brands that serve a higher purpose.

We’ve seen Greek gyros in convenience formats in the past, but the new version from Kronos actually tastes like it was sliced right off the gyros cone, which is pretty much what happens in the factory, where a robot carves the meat before it’s packaged. For dessert I tried a nice baklava from Sitti’s Foods; it turns out that “sitti” is Lebanese for “grandmother,” which is a pretty good recommendation.

This year saw an extraordinary proliferation of tech-based products and services, many of which were clustered in the large Tech Pavilion and its surrounding aisles. The nifty new DigiTECH Bar feature allowed attendees to consult individually with tech experts to figure out how and where to use the best apps, platforms and products for their operation. But as a non-techie, I was most taken with Startup Alley, where a whole slew of newbies pitched their digital wares to address everything from scheduling and timesheet management to menus for the visually impaired. The latter, Tappy Menu, utilizes a smartphone’s ability to read text aloud. BlazeJobs is a mobile app that hooks up job seekers with prospective employers. I’m using the phrase hooks up deliberately, Bret, since the young woman at the booth told me she thinks of it as the Tinder of hiring apps. I’m not sure which way you swipe.

Showrunners obviously are working hard to keep the program both relevant and engaging. I liked the Signature ’16 event, where TED met tradition in an updated take on the conventional panel discussion. NRA president and CEO Dawn Sweeney spoke one-on-one with three prominent panelists and really went in depth on their subjects of local sourcing, demographic change and delivery services and the implications to operators.

I was especially interested in the exhibitors who represent a taste of things to come. You and I have debated the real complexities of the farm-to-table movement, which consist mainly in getting the food from the farmer to the operator on an efficient, consistent basis. Well, This Old Farm represents 100+ Indiana family farmers in a distribution effort to make local foods more readily available, and Fifth Season Co-op does the same thing for its Wisconsin-based farmer-members. Speaking of co-ops, Alvarado St. Bakery is a worker-owned cooperative which sells breads made from sprouted grains, while Ezekiel 4:9 offers several varieties of sprouted waffles. Grower Pete’s Organic Living Baby Butter Lettuce is grown hydroponically and sold with the roots attached. There’s a nascent demand for living foods, which advocates tout for their higher nutrient values, and this may be a harbinger of a fringe movement from the health-foods sector entering the broader foodservice market.

I’m anxious to hear your takeaways from the show, Bret, but before I hand this off to you, may I kvetch one more time about my feet? The way I figure it, 650 thousand square feet is equivalent to running all around nearby Soldier Field about 14 times. I think NRA Show 2017 should come packaged with a half-time break.

Nancy, I have two words for you: arch support.

Actually, I’m afraid I didn’t notice your shoes when we were in Chicago together, so maybe you had plenty of arch support. But shoes that get along well with your feet are crucial at the NRA show. So is time management: I now strategize the show by only going to those parties that I have to go to (NRN’s own MenuMasters party, for example) and focusing on the parts of the show floor that will help me spot food and beverage trends, because that’s my job.

So I didn’t make it to Startup Alley or the Tech Pavilion — and therefore appreciate your report on what was going on there — and was quick to decline offers to be taken through the features of the latest POS system or scheduling software. Interesting, sure, but there’s a lot of ground to cover at the NRA show.

I’ve also had the good fortune for the past two years to be a judge for the FABI awards, which honor food and beverage items from exhibitors that we deem to be unique and awesome. It gives me an advance look at several dozen products that are going to be on display.

Among my favorites were Atalanta Corporation’s Peruvian sauces, including spicy but complex aji rocoto sauce, and the classic huancaina that is my favorite condiment for potatoes.

Those speak to a couple of broader trends — Latin cooking and premium meats. I honestly expected to see more Peruvian products at the show, but I didn’t. There certainly was plenty of other Latin American food, however, including several purveyors of that north-of-the-border specialty from New Mexico, Hatch green chile. I also saw a wide variety of Mexican cheeses, from cotija to Chihuahua, at both the California and Wisconsin dairy pavilions.

There was also plenty of premium meat on display, including Fermin’s amazing Spanish hams and the wares of Creminelli Fine Meats, such as additive-free sausages made with “just meat, salt and time,” as they told me.

Not that there’s anything wrong with additives, per se. Heck, I like nitrates because they help prevent botulism, which I hate.

Nonetheless clean labels are definitely a big trend, and there were plenty of exhibitors at the show touting what wasn’t in their food. Nancy, you noted the boom in gluten-free items, and I bet you also noticed how proud many exhibitors were of other things they didn’t use, from those life-saving nitrates to high-fructose corn syrup to the suddenly dreaded artificial color.

We have an obesity epidemic and people are worried about artificial color.

All-natural sodas were on display big time, including plenty of lower-calorie, more complex tasting adult sodas, and the Blue Sky and Stubborn soda brands rolled out to foodservice by The Coca-Cola Company and Pepsico, respectively, in the past year.

Also in the sparkling beverage category were two companies — B. W. Cooper and Teafinity — with concentrated teas intended for carbonation and ready for use at soda fountains, where consumption of traditional carbonated soft drinks have been on the decline for years although Coke reported a 1 percent uptick in CSD sales in 2015.

For every trend there’s a counter-trend, and so just as there were more gluten-free items, there were also a ton of noodles. Some of them were gluten-free, sure, but there was plenty of straight-up pasta, now in more ready-to-use forms, like the fresh ones stored in resealable bags by O Sole Mio, or Twin Marquis’ ramen, also fresh and sealed in plastic and a far cry from the dorm room staple.

Manicaretti Inc., won a FABI for its dry pasta that cooks in 90 seconds.

Another counter-trend: Pure looking simple foods with clean labels were balanced by foods with things added to them. They were mostly natural flavors, such as salami “infused” (their words) with Absinthe and Hatch green chile (there it is again!) by Zoe’s Meats. I was kind of taken aback by the ingredients, such as toffee & sea salt and mint chips, added to the chocolate of Tcho, a company that once was so intent on the purity of its dark chocolate that it took it years to offer milk chocolate.

There was banana bread-flavored beer, bacon-and-rosemary flavored vodka, and cheese flavored with ingredients ranging from red wine and garden vegetables to Buffalo flavoring and bacon.

At the Bar show, practically everything was “artisanal,” even if they wouldn’t have said so ten years ago. Jägermeister, an icon for young drinkers looking to do multiple shots, was promoting its family ownership and craftsmanship.

Spirit Hound Gin, a craft distillery from Lyons, Colo., is so artisanal that it uses local juniper berries foraged by its customers, who provide it in trade for free drinks.

Obscure was a plus, too, according to the exhibitors for whiskey marketer A Hardy. They said Glen Scotia from the lesser-known Scotch area of Campbelltown, was the star of their booth.

There was more to see, of course, and I’m full and tired thinking about it again. I think next year you and I need to take a bit of a break mid-show to sample more of what was on offer at the Bar show.