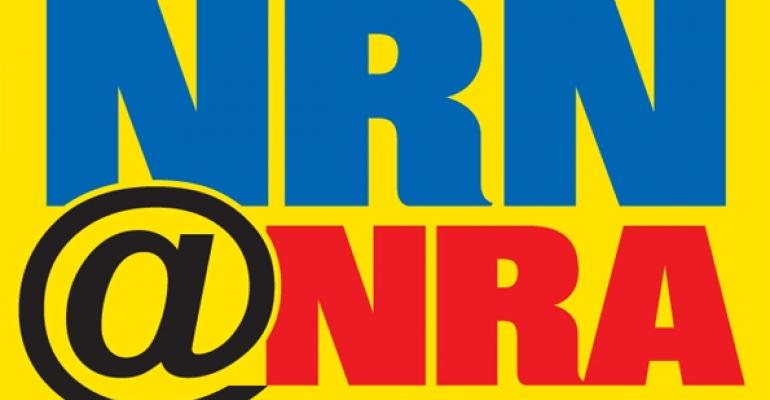 This is part of NRN&rsquo;s special coverage of the 2013 NRA Show, being held in Chicago, May 18-21. For the latest coverage from the show visit NRN&rsquo;s NRA Show page and NRN&#39;s editor blogs, plus follow @NRNonline on Twitter. Also find the most compelling digital buzz from the show in one place at NRN&#39;s new social media hub.

The evolution of menus, appealing to families with children, and making operations simpler and more profitable were some of the hot topics operators were talking about as the NRA Show opened on Saturday.

More than 60,000 restaurant industry professionals are expected to attend the National Restaurant Association Restaurant, Hotel-Motel Show, or NRA Show, in Chicago. The show is in its 94th year.

More than 2,000 suppliers filled aisles at the show, ranging from food and beverage, equipment and technology companies to providers of marketing, human resource, payment processing and other services. The NRA added another floor to the McCormick Place North Hall to accommodate 400 healthy food exhibitors.

Operators were eager to see new products and services, they said.

John Longstreet, chief executive and president of 63-unit Sharon, Pa.- based Quaker Steak & Lube and an NRA board member, returned to the restaurant industry three years ago after about 15 years in other endeavors.

“Many products that we serve now didn’t exist back then, and even the greens we served have changed,” said Longstreet, who started his career as an executive chef. “It’s been great to see that.”

It’s a great educational forum — much more than it used to be,” Longstreet added. “It has some top-notch panels of CEOs that you aren’t going to see anywhere else and some great speakers like Howard Schultz.”

Schultz, the chairman, president and chief executive of Seattle, Wash.-based Starbucks, is scheduled to speak at 3 p.m. Sunday on “Transforming Companies for the Future: Balancing Profit with a Social Conscience.”

Longstreet, an ardent note-taker and Twitter user (as @QSLCEO), said he shares many of his NRA Show discoveries as he goes through the four-day conference. “Many of them are technology based but some are food-based,” he said.

Personal technology has improved the show experience for Longstreet’s team, he said. “I’m not the guy that spends hours on the show floor looking for new products,” he explained. “I have eight people from my company here. When I do see something, I’ll send them a text message saying, ‘You have to check out this booth.’ We’re still looking for the next chicken wing.”

Nation’s Restaurant News has dispatched editors to cover the show from top to bottom.

This year’s show also includes areas that address sustainability advancements, including a functioning hydroponic garden and a section devoted to suppliers offering solutions to governmental issues such as health care legislation. A new pavilion, called Alternative BiteStyles, is devoted to products aimed at the growing area of restaurant customers with special dietary needs or restrictions.

The NRA said attendees were from all 50 U.S. states and more than 100 other nations.