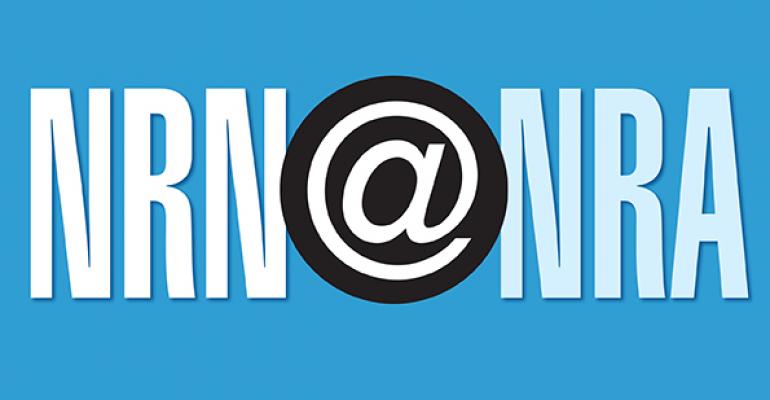 NRA Show kicks off amid time of industry growth

This is part of NRN&rsquo;s special coverage of the 2015 NRA Show, being held in Chicago, May 16-19. Visit NRN.com for the latest coverage from the show, plus follow us on Twitter and Facebook.

An estimated 65,000 people are expected to attend the National Restaurant Association Hotel & Motel Show at McCormick Place in Chicago this weekend.

It’s a good bet that many operators in attendance are planning to expand. The restaurant industry is as strong as it has been in the post-recession era. Sales have surged over the past 10 months, due to a combination of low gas prices and high employment, as customers fulfilled untapped demand. Restaurant company financials are in solid shape after years spent paying off debt and holding off on new units.

More than half of operators tell the NRA that they’re planning to make a capital expenditure in the coming months. Bigger chains like Arby’s, Wendy’s and others, meanwhile, have turned their focus to expansion after years spent building sales.

“Restaurant operators are solidly optimistic,” said Hudson Riehle, who heads the NRA’s research and knowledge group. He noted that the association’s Restaurant Performance Index is currently 102.2, well into the level the association considers to indicate that the industry is in expansion mode. The index has been at expansion levels for 25 straight months.

“The fact is, the consumer is in a better place now than they have been for years,” Riehle said. “As a result, restaurant sales growth is aided. And from an operator perspective, when they elect to hire and make more capital expenditures, they’re making a bet that their future is going to be better.”

Attendance at the NRA Show is expected to be roughly the same as last year, when 65,000 people attended the four-day event in Chicago, said Leana Salamah, senior director of convention marketing communications and programming for the NRA. But this year, the association has expanded its show floor space, as more vendors display their products and services.

It helps that the industry is in the midst of a massive shift in how it serves customers. Technology is an increasingly important part of restaurants’ customer-facing operations, and restaurants look to improve their operations and give customers more ways to order and pay for food.

“The tech side of the industry is really starting to gain a lot of traction,” Salamah said. The tech pavilion will include mobile payment, mobile engagement and Apple Pay. Tech talks will focus on helping operators use this technology, and an education session will focus on the Internet of Things — devices using the Internet to talk with one another.

This year there will also be a 3D Printing Zone, where the NRA will work with the Culinary Institute of America and a 3D printing company, 3D Systems, to demonstrate 3D food printing equipment.

At the moment, Salamah said, 3D printing has applications in sugar-based products, mostly for confections and baking. But printers could potentially be used to print bakeware and serving ware.

Also to debut this year is Startup Alley, an area where startup restaurant technology companies will be able to showcase their products and services. Companies will demonstrate app-based delivery, live-streaming online music, geo-location job seeking, and interactive digital displays, among others.

This year’s keynote speaker is also a big name in the technology world. Arianna Huffington, president and editor-in-chief of the Huffington Post Media Group, will give the address in a question-and-answer format with NRA CEO Dawn Sweeney. Jack Crawford, the NRA’s chairman, will give a state-of-the-industry address at 2 p.m. on Sunday, followed by the interview, which is titled “State of the American Dream 2015.”

Sally Smith, CEO of Buffalo Wild Wings, will also deliver a keynote speech at BAR, or Beverage Alcohol for Restaurants, formerly known as the International Wine, Spirits and Beer event. Smith will kick off the show at 11 a.m. on Sunday. Smith will talk to attendees about integrating a bar program into a restaurant.

“Buffalo Wild Wings, in particular, is a company that gets it, and understands how to invest in a bar program and make a bar program work,” Salamah said.

BAR isn’t the only conference within a conference. The NRA will also host its second finance summit. This year’s summit, which will be held Monday afternoon, will include a mix of financiers and operators who will discuss how they financed their restaurants, Salamah said.

Restaurant financing is readily available in the current market, due to low interest rates and immense interest from lenders and potential investors, helping to fuel the industry’s expansion.