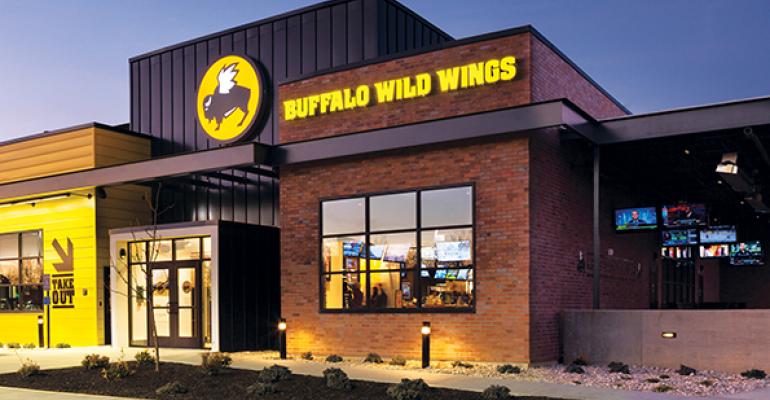 This is part of NRN&rsquo;s special coverage of the 2015 NRA Show, being held in Chicago, May 16-19. Visit NRN.com for the latest coverage from the show, plus follow us on Twitter and Facebook.

It’s safe to say that beer is an important menu item at Buffalo Wild Wings. After all, CEO Sally Smith said Sunday during the NRA Show’s BAR event keynote speech that the beverage is part of its “Wings, Beer, Sports” tagline.

Beer is Buffalo Wild Wings’ third best-selling product, after boneless wings and bone-in wings. Alcohol represents 25 percent of the company’s sales, and beer comprises three-quarters of that. The chain even sells more beer than it does soda.

That’s a high percentage at a time when overall beverage industry sales are weak amid heavy competition from retailers — and could be a reason the chain’s sales have been so successful in recent years. It also means that Buffalo Wild Wings has to work hard to keep its program relevant.

“The overall beverage industry is declining,” Smith said. “You can lose ground fast if you’re not proactive.”

Buffalo Wild Wings keeps its alcohol program fresh through investments. In essence, Smith said, the chain likens it to restaurant remodels, ensuring that its beverage program is consistently updated to keep customers coming back.

“It’s like upgrading our restaurants,” Smith said. “We’re also upgrading our POS system this year. Do the same with beverages. Keep it fresh. We fund it like any other program.”

For instance, just three years ago, craft beer represented 6.5 percent of all beer sales, Smith said. That has now risen to 11 percent, and the craft beer industry is hoping to boost that figure to 20 percent. At Buffalo Wild Wings, craft beer makes up 34 percent of beer sales.

“That’s a huge opportunity,” she said.

The company has a team dedicated to keeping up with beverages. The team keeps up with information and insights, and then develops ideas based on that information before developing a product, Smith said.

At that point, the product goes through an intense validation process to ensure that it resonates with guests. It has an internal focus group of employees who fit Buffalo Wild Wings’ target market. That group is regularly invited to test products.

But Smith isn’t part of that group.

“I’m not our target guest,” she admitted. “It doesn’t matter what I like. It matters what our guests like.”

At that point, the company proves the concept and then takes it to a few restaurants for testing. If it works and sells, the product is refined to ensure it can be done throughout the chain’s 1,100 locations. The last step in the process is communication, which includes marketing and advertising, but also communication to team members.

“That’s a critical step,” Smith said. “We have to make sure team members have the right amount of knowledge to prepare and sell.”

In recent years, Buffalo Wild Wings has made significant investments in its beer program to increase guest satisfaction and reduce waste. That has included training to ensure that staff can correctly pour craft beer.

Not getting that right, Smith said, “would be like not cleaning your grill and still expecting to provide a quality product.”

But the company hasn’t just focused on beer. In recent years, it has studied spirits to see what kind of drinks pair well with wings. And lately, the company has expanded its wine offerings.

Wine used to be something of afterthought at the chain, Smith admitted.

“If you have the courage to order wine at Buffalo Wild Wings, you deserve a good wine,” Smith said.

Going to Buffalo Wild Wings and ordering wine amid a table full of beer drinkers “is like going to a meeting and ending up with the broken chair.”

The company increased the size of its wine glass, Smith said, and now has a selection of wines that go well with its products. While wine is still a small percentage of the company’s sales, they’ve been increasing, while not taking away from other beverages.

Of course, there might be a good reason why the chain improved its wine offerings. When asked later what she drank, Smith said, “Why do you think that I got them to use a bigger wine glass?”