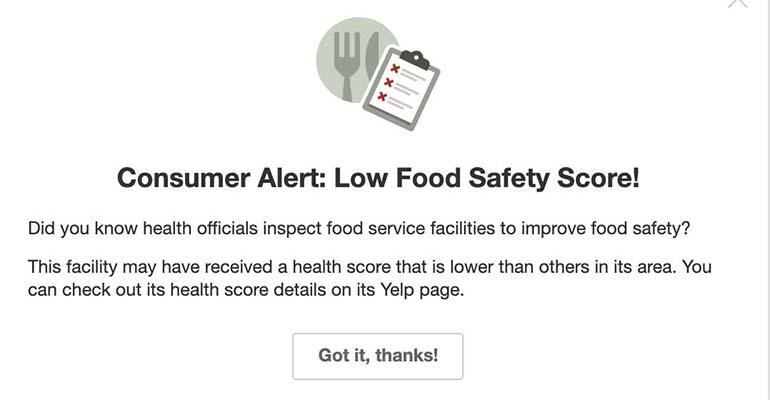 This week, Yelp is adding a new feature that could poke the bear.
News

Notifications flag restaurants with ‘extremely low’ health scores, including those with C grades in Los Angeles

The restaurant industry has always had a love-hate relationship with Yelp. This week, Yelp is adding a new feature that could poke the bear once again as the consumer review site plans to launch Health Score Alerts for restaurants with bad health inspection reports.

Yelp launched the alert system this week in Chicago and Los Angeles. The system of alerts, which come in the form of a pop-up message to users, expands another Yelp program aimed at giving consumers health score information. The site currently posts restaurant hygiene scores in more than 30 states, including letter grades for restaurants in Los Angeles County.

In 2015, Yelp went one step further by publishing alerts on the most “egregious offenders” in San Francisco.

Notifications are sent when a Chicago or Los Angeles restaurant gets an extremely low health score for violations that include potentially high-risk hygiene concerns, the company said.

“This allows consumers to make more informed choices about where to eat and may reduce foodborne sickness,” Yelp said.

The alerts in Chicago and San Francisco appear on the business pages of restaurants scoring in the lowest percentile, relative to the rest of the city. In Los Angeles County, where letter grades are assigned, any restaurant with a C or lower within the last six months will get an alert.

The consumer review site said it was inspired to show health scores on business pages after a 2013 study showed that the number of hospitalizations due to foodborne illness dropped by 13.1% in Los Angeles County after restaurants were required to publicly post their health inspection grades. 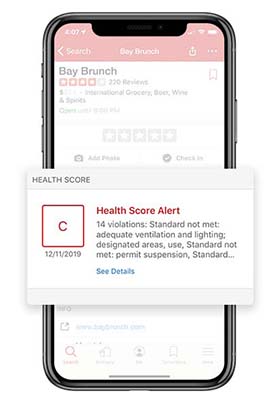 According to a Harvard Business School study about the effects of Yelp’s alerts in San Francisco, restaurants that received an alert had a lower probability of getting a second alert.

“Although there is no evidence showing an improvement of restaurant hygiene scores across restaurants, we find a decrease in the probability that the low-score restaurants will receive low scores again after the alert,” according to the study.

Yelp said the only way to remove a health alert from a business page is to “improve the underlying health department food safety score such that it is no longer among the lowest in the area.”

Businesses, Yelp added, “cannot pay to have alerts removed” from their profile.