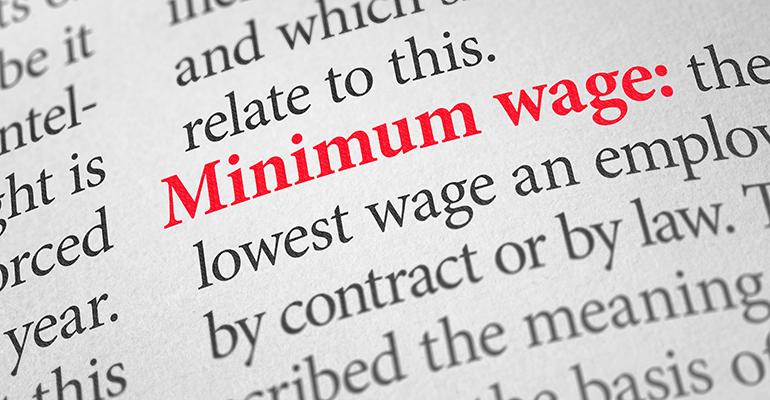 Zerbor / iStock / Getty Images Plus
During the late-night “vote-a-rama" on Feb. 4, the Senate voted against a minimum wage increase.
News

COVID relief moves forward after a late-night “vote-a-rama” that stripped out the proposed wage hike, but Democrats say they will try again

During the budget hearing’s early morning “vote-a-rama” on hundreds of amendments to the budget resolution, the Senate unanimously voted in favor of the amendment put forth by Sen. Joni Ernst (R-Iowa) that would "prohibit the increase of the federal minimum wage during a global pandemic,” according to Politico.

Senate Budget Chair Bernie Sanders (I-Vt.) — a major proponent of the $15 per hour federal minimum wage — reluctantly said he would support the amendment, though he added on the Senate floor that it was never his or his fellow Democrats’ intention to increase the minimum wage to $15 per hour “immediately during the pandemic.”

“I will do everything I can to make sure that a $15 minimum wage is included in this reconciliation bill,” Sanders said on the Senate floor early Friday. “We need to end the crisis of starvation wages in Iowa and across the United States.”

Ernst noted her party’s victory in delaying the minimum wage hike, which if enacted during a pandemic, would “kill jobs and destroy small businesses,” she said.

Tonight I got the entire Senate —Democrats and Republicans — to agree not to hike the federal minimum wage to $15 per hour during a global pandemic, which would kill jobs and destroy small businesses. https://t.co/otHBMQEsgJ

The original proposal from President Joe Biden, however, was to raise the minimum wage gradually to $15 an hour over the course of nearly five years.

House Speaker Nancy Pelosi noted that, despite Friday morning’s amendment vote, they will not be abandoning the largely Democrat-approved proposal to more than double the current $7.25 federal minimum wage by the end of 2025:

“It’s not the last bill we’ll pass,” Pelosi said according to NPR.

The late-night proceedings also resulted in more bipartisan agreements, including support for aiding the hospitality industry, and the approval of an unspecified amendment that would ensure the promised $1,400 stimulus checks would not go to “upper-income taxpayers,” Politico reports.