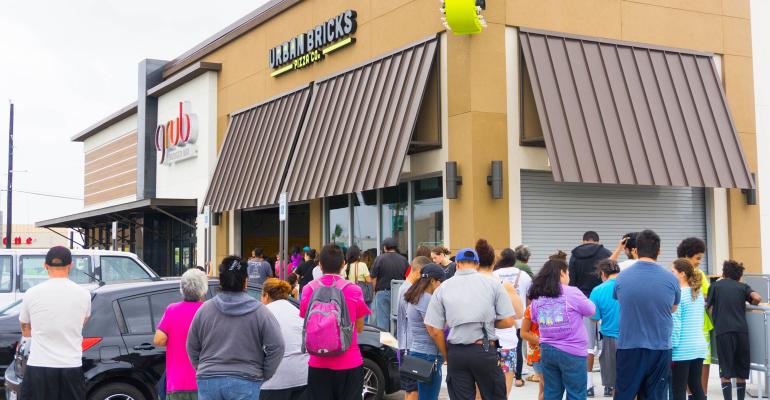 Restaurants respond in the wake of Harvey

Local restaurants and chains give away food amid closures

Restaurants in Southern Texas and Louisiana have closed amid floods following historic rainfalls during Hurricane Harvey this week.

But a few are opening to make donations of food to local residents and first responders working to rescue people stranded in flooded cars, in trees or on their roofs.

The Shake Shack Inc. location in Houston, opened just late last year, was not flooded but couldn’t open because its employees couldn’t get to work, CEO Randy Garutti said in an interview.

The handful of workers who did show up instead made a bunch of burgers and gave them away — including some to the Houston Police.

Shoutout to @shakeshack for feeding our Midwest Patrol officers today as they work long hours under incredible conditions #HoustonStrong pic.twitter.com/N8kHNy7D4O

“We had four or five guys who went into the Shack and started cooking burgers for all the police and anyone else who was in,” Garutti said. “We just cooked burgers and gave them away.”

Harvey dumped massive amounts of rain onto Southern Texas and parts of Louisiana, with as much as 50 inches in some parts. The deluge flooded streets, homes and businesses, leading to overflown levees and dams and driving tens of thousands of people to area shelters. Emergency personnel rescued more than 3,000 people, according to local reports and the Associated Press.

Many restaurants in the Houston area closed due to the rains, in part because of floods but also because many workers couldn’t make it in for their shifts.

That includes more than 600 Subway locations in the Houston area that closed due to power outages and flooding, according to a company spokesperson.

“Our field teams and franchisees in Houston are assessing their business and personal needs, and we are looking for ways to best assist them, and for ways to support relief efforts for the community and first responders,” the company said.

More than 20 Smoothie King locations across the Houston area have been closed since Saturday and many owners don’t know the extent of their damage, according to a spokeswoman for the company.

Dave Overton, the CEO of Cheesecake Factory Inc., told Nation’s Restaurant News on Tuesday that five area locations were closed, but he said all the locations have electricity and spoilage was not a problem.

Waffle House, meanwhile, had to close four locations due to the hurricane, the company said in a tweet on Monday. The chain, renown for its ability to respond to such storms, has 27 locations in the area open.

Numerous Houston area restaurants remain closed in the aftermath of the storm, according to Eater, but more are beginning to reopen as the industry makes a comeback there.

Many restaurants fed emergency responders, much like the local Shake Shack.

A Beef O’Brady’s location in Lake Jackson opened on Saturday to feed emergency and hospital personnel for free and have offered free meals to those helping with recovery efforts today, according to a spokeswoman.

Julio Chavez, who operates three Which Wich locations in Katy and Humble, Tex., has been making peanut butter and jelly sandwiches for residents of the shelter at Cinco Ranch High School in Katy — near his father’s house, where Julio has been staying since his own home in Humble was flooded. And it’s not just restaurants. Some suppliers have had to temporarily shut down operations, too.

Martin Preferred Foods, a Houston-based specialty supplier, said on Tuesday that it had to close its facilities in the city for the first time in the company’s 74-year history.

Some company executives, including Company President Jeffrey Tapick and CFO Charles Poirier and a handful of employees were able to open the facility to supply nearby customers and first responders.

“We have a number of customers in downtown Houston, including large hotels and the convention center, who are housing thousands of emergency first responders and flood evacuees, and they are running low on food,” Tapick said in a statement. “Some of those customers reached out to us yesterday and asked if there was any way we could provide some relief. Those of us who could safely get to work were able to open the warehouse and provide chicken, meat and groceries for those most in need.”

The company also dropped off a donation of beef fajitas to the Houston Police Department.

This article has been updated with comment from Subway.
TAGS: Operations
0 comments
Hide comments
Related
Sponsored