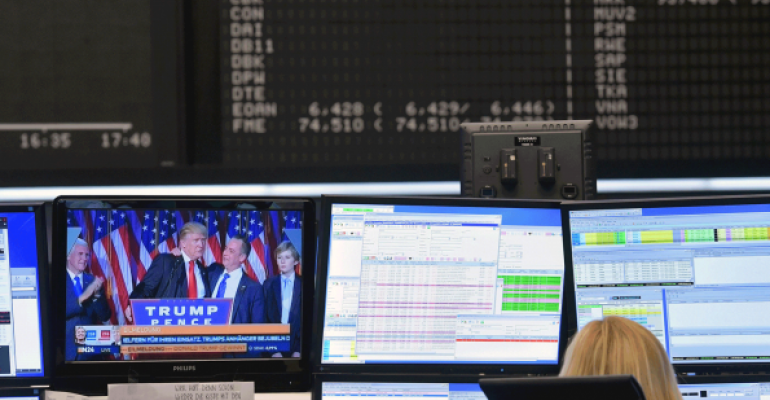 Strong day for stocks takes restaurants along for the ride

Restaurant stocks rose more than 1 percent on Wednesday, the day after Donald’s upset win in the presidential election.

The NRN Restaurant Index increased more than 33 points Wednesday, or just more than 1 percent. That was along the same lines as broader stock indexes.

The Dow Jones Industrial Average rose 1.4 percent Wednesday — after an initial shock overnight and following a roller-coaster morning as investors digested the news of Trump’s victory.

Restaurant stocks have been down most of the year amid same-store sales worries and profit concerns as labor costs increase.

Some of those concerns didn’t go away with Trump’s win. Voters in four states — Arizona, Colorado, Maine and Washington — all agreed to increase their minimum wages to at least $12 per hour. That is likely to further the industry’s labor cost concerns amid other areas’ increases and overall competition for workers.

At the same time, however, investors could have seen the industry as a potential beneficiary of a Trump presidency. The Republican has vowed to roll back some decisions made in the past eight years under President Obama, including the Affordable Care Act, which requires employers to provide health coverage.

Less likely is a rollback of rules making more workers eligible for overtime pay — Trump has only said that he would exempt small businesses from the rule.

Still, there were some big winners Wednesday, including some companies that had been struggling all year, such as Noodles & Co. (up 6 percent), Bravo Brio Restaurant Group (up 7 percent) Ruby Tuesday (up 5 percent) and Papa Murphy’s (up nearly 14 percent). Bloomin’ Brands, Cheesecake Factory and Cracker Barrel were among the companies up more than 5 percent.

Two companies reported earnings on Wednesday: Rave Restaurant Group was down 7 percent after disappointing sales at its Pie Five concept, and Wendy’s Co. was up 1.5 percent after beating investor expectations.

Despite the increase, restaurant stocks are still down 1.5 percent on the year and more than 9 percent over the past six months.