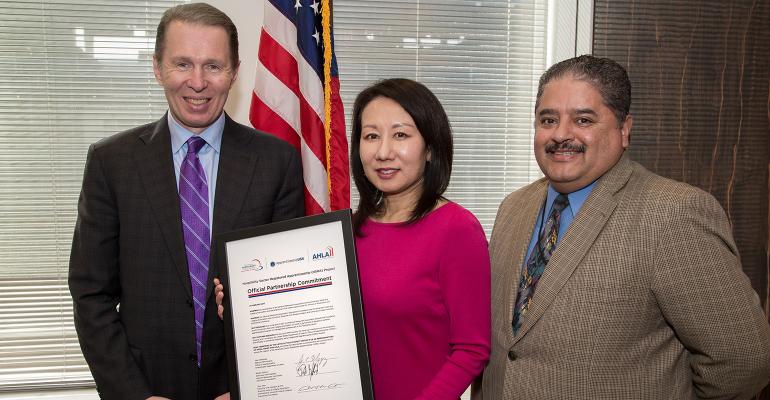 National Restaurant Association
At the Feb. 21 signing of the Hospitality Sector Registered Apprenticeship project partnership are, from left: Rob Gifford of the NRAEF, Joori Jeon of the AHLA and Jose Velazquez of the Labor Department.
News

A hospitality industry apprenticeship program, intended initially to groom more than 400 workers for management careers, is underway in restaurants and hotels.

The National Restaurant Association Educational Foundation and the American Hotel & Lodging Association on Feb. 21 signed a $1.8 million contract with the U.S. Department of Labor to launch the national Hospitality Sector Registered Apprenticeship project, which will seek more than 400 apprentices in its inaugural year.

The project will place workers in paid apprenticeships focused on management-level positions across the hospitality and foodservice industries.

An “accelerator” meeting is planned for May 19 in Chicago, before the start of the National Restaurant Association’s annual trade show, to recruit more potential restaurant employers for the program and present the apprenticeship standards, said John Shortt, the NRAEF’s director of program development who is managing the Hospitality Sector Registered Apprenticeship Project for the NRAEF.

“The apprenticeship program accelerates the career pathway,” Shortt said in an interview Tuesday. “We want to give people careers and not jobs. There are many well-paying jobs in this industry. If you are on career pathway, you can access those jobs.”

“This is a real win-win for restaurant companies,” Lambourne said, “and certainly for the folks out there seeking careers in restaurants, foodservice and hospitality. It gives people a defined career path for management in the industry.”

Studies have found 91 percent of apprentices remain employed in their companies after completing programs, with average annual starting wage of more than $50,000. And for employers, studies indicate that for every dollar spent on an apprenticeship, they receive an average of $1.47 return in increased productivity.

The Labor Department has awarded more than $20.4 million in apprenticeship contracts to programs in such industry sectors as healthcare, energy, construction, logistics and manufacturing. Newer industries include information technology and transportation.

“We are on the new wave,” Shortt said. “The older ones are the construction trades.”

The NRAEF is the philanthropic foundation of the NRA. In 2016, the U.S. restaurant and foodservice industry was estimated to employ more than 14.4 million.

“The restaurant industry is one of the largest out there in terms of employment and impact on the economy,” Lambourne said. “This gives us some parity with other certified professions.”

The new hospitality apprenticeship project, Lambourne added, “puts added horsepower and muscle into creating true career and management opportunities for a large segment of the workforce.”