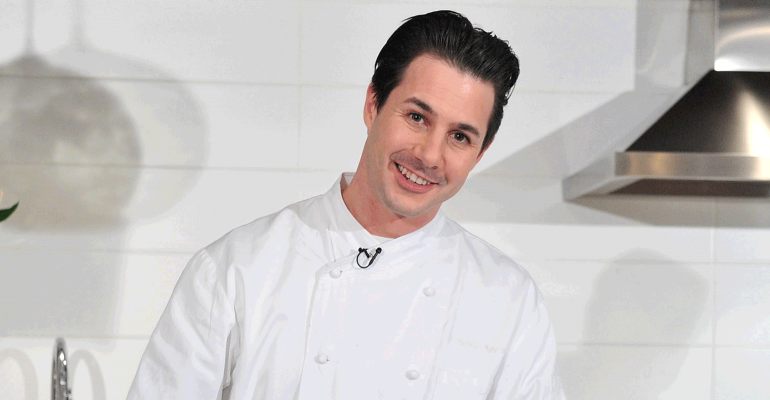 Budding TV celebrity and former Jean-Georges executive pastry chef Johnny Iuzzini has been accused of sexual harassment and misconduct by four former employees, according to a report Wednesday by the online news site Mic.

Two pastry chefs and two externs — who were not named and who worked with Iuzzini between 2009 and 2011 — in the report described repeated incidents of misconduct while they worked at Jean-Georges, the high-end restaurant owned by Jean-Georges Vongerichten in New York’s Trump International Hotel.

The kitchen workers said that Iuzzini had a habit of touching female employees inappropriately. They said he also asked female workers to give him shoulder massages at the end of their shifts, made crude jokes and showed one worker a graphic photo.

They also described him as having a violent temper, once throwing an empty liquid nitrogen canister at a female worker.

One extern said she had a sexual relationship with Iuzzini that she didn’t describe as coercive, but that the power dynamic made saying “no” difficult, according to the report. The woman, who was 19 at the time, told Mic, “If one person has all the power, it’s not really consent.”

Iuzzini in a statement published by Mic denied several of the allegations, saying many were inaccurate and others he did not recall, and “none were meant to hurt people.” He denied the suggestion that he might have a drug problem, or that he threw a nitrogen canister at anyone.

But he also said he was “shattered and heartbroken at the thought that any of my actions left members of my team feeling hurt or degraded.”

He added, “Nonetheless, I must take responsibility if any of the members of my team felt uncomfortable by my words or actions, regardless of my intent or recollection. I must hear that what the women making the accusations are telling me (sic) and recognize I caused pain. I have strived to be a good mentor over the course of my career, and I now understand that I failed some people. To me, that is unacceptable.”

Iuzzini also described growing up in the industry at a time when it was rare to see women in kitchens, and behavior was “more bawdy than professional.

“There were dirty jokes and vulgar remarks, times where people would lose their tempers and it was deemed permissible, since four-star kitchens are high-stress jobs,” he said. “This was the behavior I learned as a boy, and for too many years participated in during my restaurant career. And it was wrong.”

He also expressed regret that people who worked for him did not feel comfortable letting him know how they felt. “That is a failure of mine as a mentor, as a leader,” he said. “I hope that anyone who felt wronged by me will reach out to me and give me the opportunity to apologize to them personally. I assure you that I will continue to learn, continue to do better and continue to strive to be the type of chef who can lead our industry into a culture of respect through example.”

While at Jean-Georges, Iuzzini drew national attention as a pastry chef, though he left the restaurant on amicable terms in 2011, he said. He was named outstanding pastry chef by the James Beard Foundation in 2006, and he has appeared as a judge on Bravo’s “Top Chef: Just Desserts.” Iuzzini is also a pastry consultant and runs the company Chocolate by Johnny Iuzzini, launched earlier this year.

Next week he is scheduled to appear on ABC’s “The Great American Baking Show,” which premiers Dec. 7.

Lina Varriale, a spokesperson for Jean-Georges, said in a statement to Restaurant Hospitality that the entire group is “troubled and frankly sickened at the thought that anything like what was described in the article could have occurred in our restaurants.”

Varriale said the company has long had an anti-harassment policy and reporting procedures in place, and employees are made aware of both when hired and at intervals during employment.

“While we have certainly improved and fine-tuned our HR function over the years, we have been committed to the underlining principles since the beginning of our organization. We are proud of our overall track record of responding to employee complaints and concerns when they come up, and have certainly taken prompt and appropriate action when circumstances have warranted. Fortunately, to our knowledge, they have been few and far between,” the statement said.

“However, we are distressed that some employees may not have felt comfortable coming forward at the time,” the statement continued. “It is not and has never been our policy to tolerate the type of behavior described in the article. Whether directed at women or men, yelling, berating, touching, or harassment of any kind is not how we operate our restaurants.

“Mr. Iuzzini has not been a part of our restaurant group for some time and does not represent our philosophy towards dining, and more importantly, to our working environment,” the statement added.

Varriale also noted that “recent events and media attention has caused us to only look further inward as to how we can better serve our employees and even further integrate our human resources function and insure that our employees understand that workplace harassment has no place in our workplace culture.”

Sexual harassment has been in the headlines for weeks across various industries.

Last month chef and restaurateur John Besh stepped down after he and other male managers were the target of similar allegations of sexual harassment and misconduct in a report in the New Orleans Times-Picayune.

A special report on sexual harassment is coming soon to Restaurant-Hospitality.com and the December issue of Restaurant Hospitality magazine.