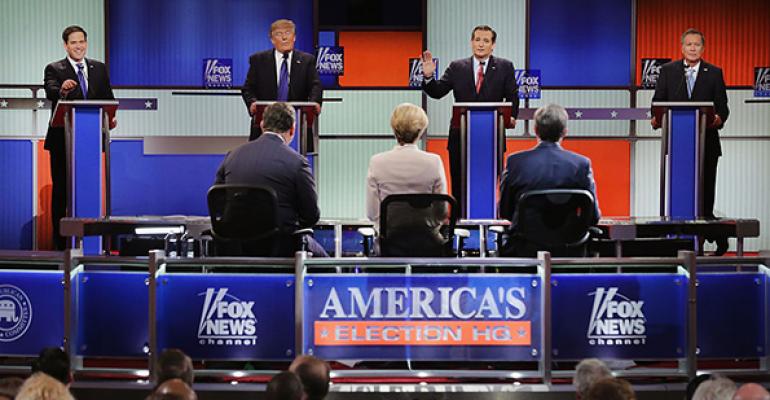 <p>Republican presidential candidates&nbsp;participate in a debate sponsored by Fox News at the Fox Theatre on March 3 in Detroit.</p>
News

Opinion: When did the ‘family values’ party lose its values?

As much as it might appear, this is not a transcript from a third grade name-calling contest. These are, in fact, actual barbs recently thrown at one another from two of the leading Republican candidates for President of the United States.

The President. You know, the person who is supposed to be the leader of the free world and chief executive of the most powerful nation on the planet. The person who is charged with continuing the noble tradition of leadership handed down to them by statesmen like Abraham Lincoln and Ronald Reagan.

If it wasn’t clear to me before, it certainly is now after the last few weeks. The race for the highest office in the land has devolved from something we as a people once considered honorable into something that feels like elementary school recess crossed with reality television.

It is time for our corporate leaders to force a change of conversation toward jobs, the economy and ensuring America remains a global business force.

I believe the seeds for what we’re experiencing now were sewn in another election season, more specifically in October of 2008. On a fall day, almost eight years ago, Sen. John McCain stood on stage at a campaign rally in Waterville, Minn. and was put in the position of defending the character and values of his Democratic opponent, Sen. Barack Obama. 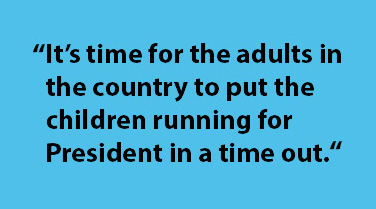 As McCain took a question from an older woman in the crowd regarding what she contended was Obama’s Arabic background, other audience participants began to yell out terms like “Muslim,” “liar,” and “terrorist” to denounce Obama. McCain retook the microphone from her and as calmly and respectfully as possible said, “No, ma'am. He's a decent family man [and] citizen that I just happen to have disagreements with on fundamental issues and that's what this campaign's all about. He's not [an Arab]."

He was booed. Loudly. John McCain — Naval Academy graduate, fighter pilot, five year POW in Vietnam, and thirty year member of the U.S. Senate — a lifetime given to his country — was repudiated because he wouldn’t impugn the character of another public servant. He stood on his own virtue, character and values and refused to engage in that kind of small mindedness, pettiness and outright prejudice. And as a result, his “credentials” as a conservative were lost at sea, and like any good Navy man he went down with the ship. That was the day the last vestiges of decency were kicked to the curb of the modern Republican Party and the candidacies of Donald Trump and Ted Cruz were born.

Fast forward eight years and the crackpots are no longer in the crowd — they are on the main stage. And they are competing against one another to be President of the United States.

When I was young I was taught, rightly or wrongly, that being a conservative meant you favored limited government, federalism, religion in schools, restrictions on abortions, strict interpretation of the constitution and a muscular military and foreign policy.

Now the front-runners in the Republican Party are teaching the nation that being a conservative means you are isolationist, xenophobic, homophobic, intolerant, mean-spirited person who has contempt for most Americans. When did that happen? Back in the day it was the Democrats that were always the godless hordes — unemployed, living in their parents’ basements, smoking dope, protesting the establishment, having kids out of wedlock. These days we refer to people like that as Palins.

These candidates are currently engaged in a campaign so destructive and irresponsible that the most likely victim won’t be Hillary Clinton; it will be the fundamental underpinnings of the republic itself.

What’s lost in this ridiculous unprecedented mess of a campaign season is any meaningful conversation about jobs, the economy and our global competitiveness. We should heed the words of another Republican President, Calvin Coolidge, who famously said, “The business of America is business.” When are our corporate leaders going to stand up and say enough is enough? When are the job creators going to say, “we’re fed up and we’re not going to take it anymore.”

Not only is there a palpable lack of outrage among corporate leaders, there is almost a sense of reserved amusement and acquiescence. For those of you keeping score at home, Republicans have won only one of the last six presidential elections and that was George W. Bush barely beating John Kerry in 2004. (Bush lost the popular vote to Gore in 2000 by over 500,000 votes). If Republicans hope to reverse that trend, the drivers of the economy have to get off their collective golf carts and put an end to this nonsense. Once again, they are fiddling while Rome burns, only this time around they’re telling the firemen not to bother. It’s time for the adults in the country to put the children running for President in a time out.