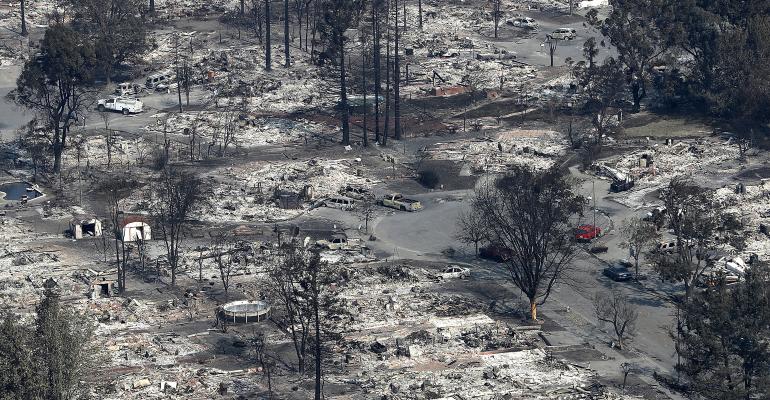 As wildfires rage, hospitality industry comes together to helping those in need

With the death toll continuing to climb Friday as firefighters struggled to gain control of Northern California’s wildfires, restaurateurs across the state rallied to feed first responders and displaced residents, and raise funds for what is expected to be a long recovery.

As of Friday morning, the fires had claimed at least 31 lives, and more than 212,000 acres had burned across several counties, including the wine-country towns of Calistoga and Santa Rosa. Some residents around Napa were allowed to return home on Friday, though the region still had power outages, downed power lines and hazardous debris.

Meanwhile, the restaurant community jumped into action, joining forces to feed people and offer comfort. Many restaurants throughout the area remained closed Friday as staff members dealt with evacuations and property damages.

The boutique inn, restaurant and farm SingleThread in Healdsburg was out of the fire zone, but remained closed for service over the past week to allow staff members to focus on their own safety. Those who were available, however, cooked for local shelters, at one point harvesting tomatoes from the farm to make tomato soup and grilled cheese sandwiches, said spokesperson Kristine Arambulo Keefer.

“It is just the start,” she wrote in an Instagram post. “We have so much work to do. Please stay tuned for fundraisers that will help all of those family displaced.”

Crenn also urged rental property landlords to help with lower-than-market rent. “No time for greed, it is about humanity and give back.”

Celebrity chef Guy Fieri, who has a home in Santa Rosa, also arrived in the area Thursday to cook for evacuees through the weekend. Fieri told local TV stations in Sacramento that his home survived, though he and his family had to evacuate at 2 a.m., and a nearby park was decimated.

“This is the least we can do,” he told a local station. “We’re so sorry for friends who have lost homes. There’s a lot of really good people coming together.”

The Golden Gate Restaurant Association, including restaurant operators in San Francisco, organized what it called a week-long Chefsgiving from Nov. 13-19. The association was collecting donations and organizing volunteers to cook for relief centers throughout Napa and Sonoma counties.

Employees at the high-end restaurant Saison in San Francisco put together a collection, and a group led by wine director Mark Bright and director of operations Bevan Bunch rented trucks to distribute blankets, pillows, towels and other necessities to those in evacuation centers.

The Culinary Institute of America's Greystone campus in St. Helena was scheduled to reopen Tuesday after being closed as a result of the fires last week. Both the campus and affiliated restaurant CIA at Copia in Napa remained out of the line of fire.

Over the weekend, the restaurant planned a free open house to give community members a place to go for a few hours to "give their minds some relief from everything that's been happening," said spokesman Jeff Levine. At the event, the CIA planned to collect donations for the Napa Valley Community Foundation Disaster Relief Fund.

Liholiho Yacht Club in San Francisco, for example, through Friday collected toiletries, pet food, diapers, blankets, clothing and more to bring to shelters. The restaurant’s chef and crew also prepared food for evacuees, according to its Facebook page.

Fundraisers were expected at many restaurants throughout the San Francisco Bay area — and beyond — through the weekend.

The Los Angeles-based Coolhaus Ice Cream shops and trucks, for example, are donating $1 to the Napa Valley Community Disaster Relief Fund for every purchase of Dirty Mint Chip ice cream in any form or for every photo of a Dirty Mint Chip sammie or pint posted on Instagram or Twitter with the hashtag #coolcommunity.

Meanwhile, the lauded Michelin Guide on Thursday indefinitely postponed its planned announcement of this year’s star recipients in the Bay Area, according to the San Francisco Chronicle.

“We have followed the crisis unfolding in Napa, Sonoma and other counties near San Francisco with grave concern and heavy hearts. Recognizing the turmoil and tragedy of the fires that are still burning, we understand this is a time for grief and recovery, not celebration. We extend our condolences to all who have been affected,” said Claire Dorland-Clauzel, Michelin’s executive vice president of brands, in a statement.

This story has been updated to correct the location of the Greystone campus and clarify the date of reopening.
TAGS: Operations
1 comment
Hide comments
Related
Sponsored