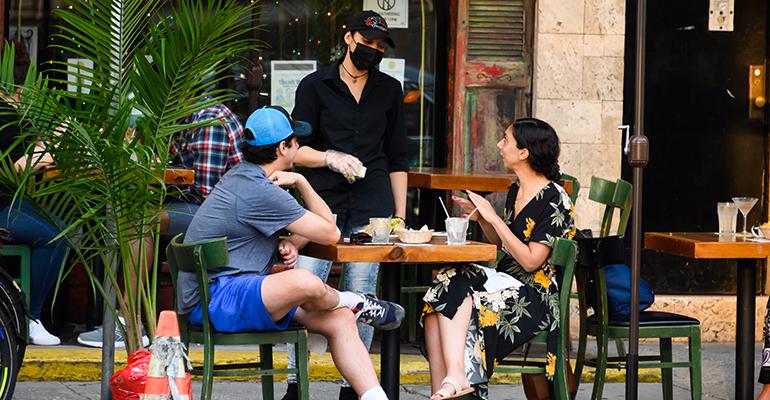 The legislation, which goes to the mayor for final approval, will allow restaurants to implement a surcharge for up to 90 days after indoor dining resumes at full capacity

The New York City Council on Wednesday passed a bill allowing restaurants to add COVID-19 surcharges of up to 10% onto a customer’s bill for up to 90 days after full-capacity indoor dining resumes.

The measure, meant to help boost a struggling industry, is fully voluntary, and was passed the same week that Gov. Andrew Cuomo announced the city could resume indoor dining at 25% capacity on Sept. 30. The bill now goes to New York City mayor Bill de Blasio for his signature.

“The passage of the COVID-19 recovery bill will help struggling restaurants generate additional revenue to help pay for expenses like PPE for their employees, outdoor dining setups, rent, labor and other expenses to give them a fighting chance of survival,” the New York City Hospitality Alliance said in a statement. “We commend the City Council for passing this important temporary legislation and urge Mayor de Blasio to sign it into law immediately.”

If the bill passes the mayor’s desk, restaurants that choose to implement the surcharge will have to make it explicitly clear before a customer places an order by informing customers of the charge on the bottom of each menu page and only labeling it as a COVID-19 surcharge.

But New York City restaurants are not the only ones looking to raise more cash with extra charges. COVID-19 surcharges have been showing up sporadically at restaurants around the country since May. Bootleggers BBQ, a restaurant in Missouri, began implementing a 5% surcharge in May and the decision went viral after a receipt with the charge was tagged and criticized over social media. As a result, owner Brian Staack had to drop the charges.

Although there is no telling exactly how this voluntary surcharge will be received, there are concerns already with how it will affect employees who rely on tips.

“If the City Council allows employers to add a surcharge, without these employers paying their workers a full minimum wage, the surcharge would cut into workers’ already-reduced customer tips without any guarantee of tipped restaurant workers receiving the bare minimum wage,” Saru Jayaraman, president of nonprofit minimum wage advocacy group, One Fair Wage said.

One Fair Wage ended up supporting passage of the bill with the condition that a finalized version would support workers who often rely on tips to earn a minimum wage. A dissenting council member during Wednesday’s vote, Brad Lander, also expressed concern at how this bill could potentially hurt tipped employees.

“I’m worried that having this 10% surcharge will mean some people will tip less and they’re already getting less in tips because of having fewer tables,” Lander said. “I wish it were adjusted so they had to pay a minimum wage or share surcharge […] our restaurants may be hurting but our restaurant workers can’t pay their rent or put food on table.”

The bill is expected to be signed into law by de Blasio, who “enthusiastically supported” the legislation, according to the New York Post, but had not yet made the signing official as of press time on Wednesday.