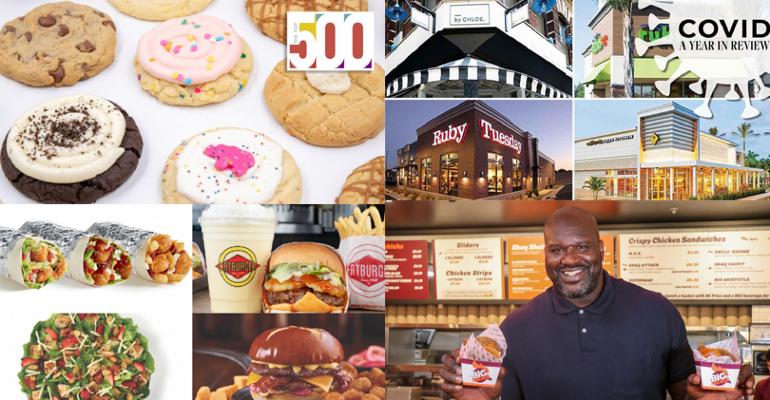 Also this year, Big Chicken, with the creative and financial backing of Shaquille O’Neal, is starting to cast a franchise-concept shadow as long as the basketball great’s 7-foot-1 frame. The Las Vegas, Nev.-based brand, with three stand-alone locations, has a wide range of deals, from a just-debuted Walmart presence with Canada-based Ghost Kitchen Brands to an expanding deal with Carnival Cruise ships.

Every year, Nation’s Restaurant News ranks the largest restaurant chains by domestic systemwide sales, giving a detailed look at the biggest players in the industry. This year, we partnered with Datassential and its Firefly data platform to provide information for 500 chains — more than ever before.

In other news, long-term indoor dining closures have devastated the casual-dining industry throughout the COVID-19 pandemic, leading many restaurant groups in the sector to declare bankruptcy. Victims have ranged from Ruby Tuesday to Sizzler. See which restaurant chains and franchisees have so far declared bankruptcy during the pandemic.

Click through the gallery to check out which other galleries made it on this years top performing stories.