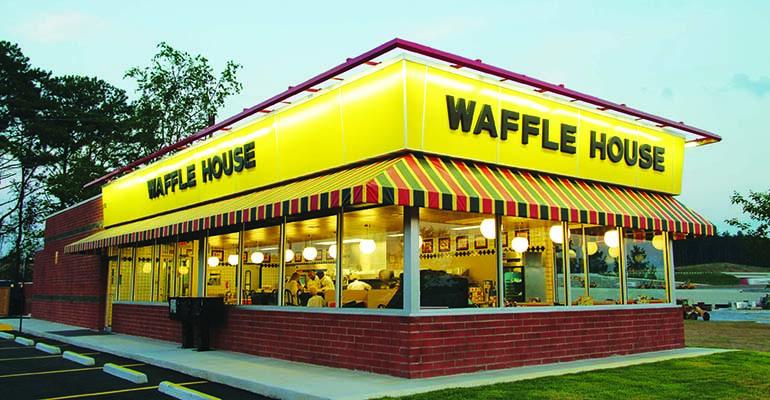 Hurricane Ian was so devastating, that even Waffle House closed

There were 40 Waffle Houses closed Wednesday and Thursday as the Hurricane battered Florida, along with destroyed and damaged restaurants along the coast

As Hurricane Ian made landfall in Florida on Wednesday as a Category 5 storm and continued to cause damage on Thursday as it was downgraded to a Category 1 storm, many residents and businessowners are now left to assess the damage. One indicator of the catastrophic impact of the hurricane is, at the peak of the storm, 40 Waffle Houses were closed across Florida, a Waffle House representative confirmed with Nation’s Restaurant News.

Over the years, 24-hour breakfast brand Waffle House has become a storm barometer of sorts across the Southeast: if Waffle Houses are closing you know the storm is bad.

Related: Looking past the current storm to the next: climate politics

The unofficial Waffle House index is used as an indicator of natural disaster severity because the yellow-toned breakfast restaurants are known for very rarely closing: green means the restaurants is up and running, yellow means a limited menu (usually low power and food supplies), and red means closed completely).

“At the height of the storm, we had nearly 40 restaurants closed because they either were in the direct path of Hurricane Ian or were in low-lying, flood-prone areas,” Njeri Boss,vice president of public relations for Waffle House told Nation’s Restaurant News. “We continue to work diligently to reopen each of those restaurants.  There is no set time for reopening, just as soon as possible.”

As of Friday, 30 of the 40 closed Waffle Houses have reopened, and Boss confirmed that a few sustained minor damage to signage but “nothing major.”

Not all restaurant owners were so lucky, however. Areas like Sanibel Island, Fort Myers, and Naples, Fla. Were completely flooded and many homes and businesses destroyed. Rude Shrimp Company, a seafood restaurant in Fort Myers Beach, was completely submerged during the storm and has now closed permanently, according to an Instagram post from the owner:

“The business is gone,” TJ Holzapfel, owner of the Rude Shrimp told Fox News. “It was a little surreal to see the surge come in and take the restaurant. Mother Nature has her own agenda.”

Holzapfel was evacuated with his wife and family and saw his restaurant get destroyed through a traffic camera in their parking lot.

And he wasn’t the only one in the area—Franco Russo, former owner of the now-destroyed restaurants, Junkanoo Beach and Fresh Catch Bistro, also in Fort Myers Beach, has set up a Go Fund Me page to help his employees in their time of need. Nearly $10,000 have thus far been donated, far exceeding the initial goal of $5,000.

“My other restaurants, Two Meatballs in the Kitchen (Fort Myers & Cape Coral), have incurred water damage, but with no power, no water and probable supply chain issues, I have no idea when they will be operational again,” Russo said in the description on the Go Fund Me page.

Rescue teams are working to help out Florida coastal residents with flooded homes and communities. Many were unable to evacuate because the hurricane path was fairly unpredictable, and hit Central Florida much more than initially expected. In Orlando, although many theme parks have already reopened on Friday, many have sustained damage. Both Walt Disney World and Universal Studios Orlando are opening their parks and restaurants in stages starting on Friday. Disney World announced that around 80 resort restaurants are still closed, including AAA Five Diamond-rated Victoria & Albert’s at the Grand Floridian Resort. It is unclear whether low staffing, supply chain issues or both have impacted the lengthy list of temporary closures.

The damage from Hurricane Ian is likely not over yet: Restaurants across the Carolinas are closing ahead of the storm’s arrival, which is expected to make landfall this afternoon, with the Myrtle Beach area expected to take the brunt of the impact, according to ABC News. While many restaurants in the Charleston area will be closed all day, some restaurants have remained open to help the community, like Proof — a bar in Charleston — that is staying open to serve up ramen, beverages, and “will have power, ice, booze, beer, wine, filtered water and phone chargers” for guests.