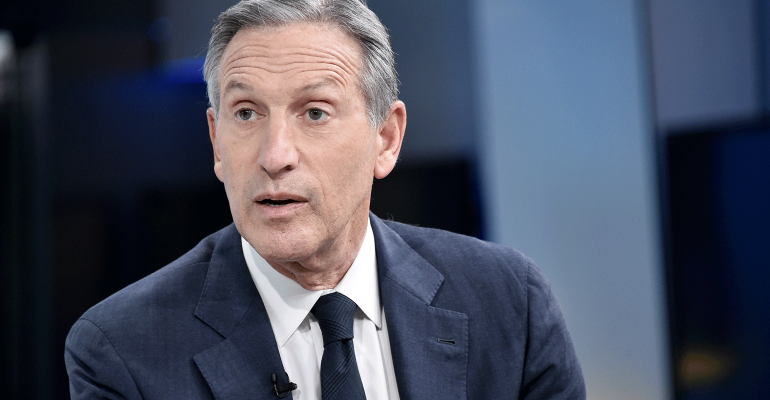 Howard Schultz, who stepped down as executive chairman of Starbucks Corp. last June, has suspended all presidential campaign activity for the summer after announcing in January that he would consider running for president as a centrist independent candidate in 2020, news outlets reported Wednesday.

According to The Huffington Post, Schultz visited his campaign office for the first time in months on Wednesday and suspended all staff with the exception of senior leadership. He added that he would not be making a definitive decision until after Labor Day.

Schultz reportedly also told his staff that he would be keeping a close eye on former Vice President Joe Biden’s presidential campaign and might consider joining the race if Biden didn’t appear to be the likely Democratic Party candidate after Super Tuesday in March 2020.

Shortly after making the announcement to his staff, Schultz reportedly sent out a memo to his supporters citing medical reasons behind his informal campaign suspension.

Related: A look back at Howard Schultz’s time at Starbucks

“While I was in Arizona, I unfortunately experienced acute back pain that required me to cut my travels short,” the email said. “Over the following two months, I underwent three separate back surgeries. Today, I am feeling much better, and my doctors foresee a full recovery so long as I rest and rehabilitate. I have decided to take the summer to do just that.”

Although he called his decision a “detour” from his campaign journey, Schultz had largely stopped most campaign activities. In May, after a series of canceled events, a spokesperson for Schultz told The Daily Beast that he was “taking a break while he is recovering from back surgery.” Schultz had also almost stopped promoting his campaign on social media at the end of April.

When Schultz originally speculated running for president on an episode on “60 Minutes” in January, the announcement prompted a #BoycottStarbucks trending hashtag on Twitter, in response to his middle-of-the-road policies, particularly his opposition to universal healthcare.

In response to the social media outcry, current Starbucks CEO Kevin Johnson distanced himself and his company from Schultz’s political aspirations:

“As a company, we don’t get involved in national political campaigns. And nothing changes for Starbucks,” Johnson said as part of a statement at the time.

Starbucks is well-known for its progressive initiatives, including its goals for hiring refugees and at-risk youth, as well as supporting deferred action for Dreamers, and supporting “ban the box” hiring practices that help formerly incarcerated individuals gain employment.

Representatives for Starbucks and Howard Schultz did not immediately respond to requests for comment.