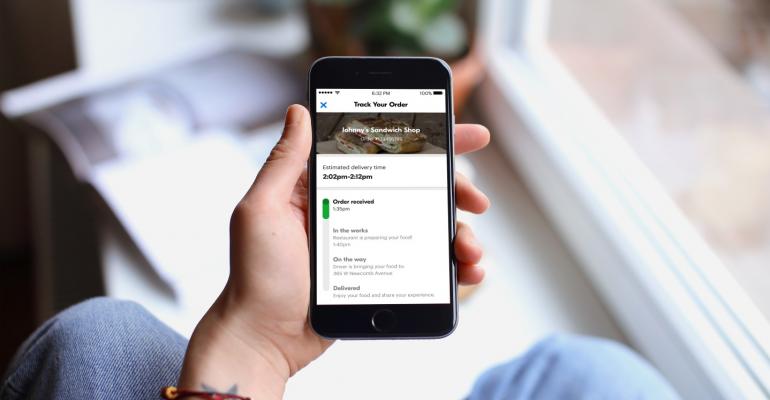 Diners calling a restaurant through a Grubhub or Seamless platform will now notice a change in their options.
News

In a letter to New York City Council members today, Grubhub released findings from the task force it created in November.

Diners calling a restaurant through a Grubhub or Seamless platform will now notice a change in their options. Customers will be prompted to press #1 to place an order #2 for everything else. This new "common sense step," as the third-party delivery provider is calling it, is based on findings from its task force. The task force was announced in November in response to an ongoing feud between Grubhub and the New York City Council.

In June, the New York City Council hosted an oversight hearing to understand the impact of food delivery apps on the restaurant industry. Previously, Grubhub was the target of a class-action lawsuit filed by a restaurant operator who claimed the delivery service charged restaurants for calls made through the app, even when they didn't result in orders. And one issue that arose during the Council hearing is that restaurants could not view charges made more than 60 days prior to see if false charges had been made.

In response, Grubhub extended the "look-back" period for restaurants to review all phone orders to 120 days.

The Council demanded more, and in October, it sent a letter to Grubhub demanding the company hire a third-party evaluator to review and refund all erroneous fees collected from restaurants for phone orders. Grubhub responded by creating a task force that was to be made up of "leads from across the company," according to a spokesperson for Grubhub, not the third-party evaluator the Council requested.

"Our goal is to get orders right – regardless of whether they are placed online, on our app, or via phone – while keeping the process fast and easy for both diners and restaurants," Grubhub's letter states.

"With that goal in mind, we are adding a new, common sense step to the phone order billing process: the integration of diner intent from the beginning."

The new dialing options will be implemented immediately across the country, a representative from Grubhub said.

"This straight-forward feature will not be the sole factor in determining whether to charge a food order commission; diner intent will be an additional input into our proprietary multi-factor process," the letter continues.

"We are nearly doubling the number of account advisors on our restaurant success team. These account advisors are available to assist restaurants with phone order inquiries, but importantly, they are also there to provide strategies for increasing order volume and driving revenue."

Notably, although Grubhub will allow restaurant owners to listen to every billed phone order, it has not extended the "look-back" period where operators can dispute a charge beyond 120 days. A Grubhub representative said the third-party delivery provider would work with individual restaurants on a case-by-case basis if they had issues with older orders.

"There is nothing in the proposed changes that would make whole the thousands of restaurants that have already paid for what in many cases were erroneous phone order fees. These are hard earned dollars that could mean the difference between a restaurant staying open or having to close their doors. This is money that Grubhub was never entitled to in the first place," he said in a statement.

And some representatives from the industry feel the same.

"It's shocking that it took so much time and pressure for Grubhub to implement what they now call a 'common sense’ step so they don't wrongfully take money from their restaurant clients," said Andrew Rigie, the executive director of the New York City Hospitality Alliance.

"But, better late than never, however the burden should not remain on the restaurants to listen to messages to determine which fees are bogus. In fact, Grubhub should not take any fees from restaurants when customers intend to call a restaurant directly to place an order.  The outstanding question is when are they going to pay back all of the money they should not have taken in the first place?"

Update Jan. 9, 2020: This article has been updated with comment from City Councilmember Mark Gjonaj