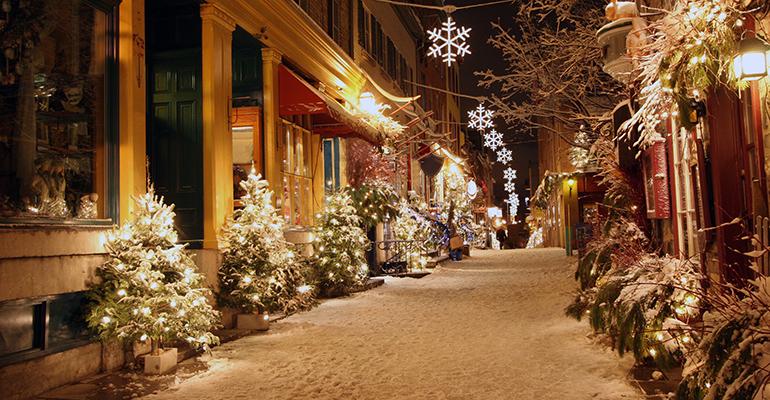 The Ghost of Restaurant Future: What managers need to do now to prepare their businesses for disruptive technologies and a changing workforce

’Tis the season when we reflect upon the year that’s coming to an end and also look to what the future holds for us and our businesses. To explore the importance of embracing change and constantly evolving, I’d like to tell you a story, a restaurant-inspired twist by a Charles Dickens classic:

Old Marley was as dead as a door-nail.  There was no doubt about that. His business partner Scrooge still had to make sure the restaurant was open by 7 a.m., despite the inconvenience of his partner’s sudden demise. So he harrumphed a farewell, dragged his scarf about his neck and hunched hurriedly through the foggy, icy dawn, down the cobblestone streets. He trudged along, lost in thought — not about his late partner’s sudden departure — but instead on the troubling ledger, fickle patrons, employee turnover and anemic sales at their failing restaurant Jake & Eb’s.

He fumbled in the cold and dark to unlock the rear alley door, stumbling into the restaurant’s dark kitchen, and calling out several times for his GM. Soon he heard the back door creak open, coupled with coughing and a stamping of feet.

“Ah, Mr. Scrooge, good morning, I was expecting Mr. Marley,” the GM called out upon spying the co-owner. “So sorry I’m a bit late,  but my son was in need of some medicine and …”

Scrooge cut him off and angrily barked: “You are supposed to be here at SIX a.m. not 6:08, Mr. Cratchit! Am I to make the eggs? Am I to toast the bread? Light the grill? Brew the coffee? Chalk the board? Bake the bread? Must I both employ you and open up the restaurant myself?”

“Tell you what,” Cratchit said, shaking his head slowly and digging into his coat pocket, tossing his keys and ID on the stainless-steel counter, “You’re right. From now on, you can open the place. YOU can keep the team engaged, YOU can greet our customers, YOU can find new servers and cooks, YOU can train them without any resources, YOU can explain why there’s no money for raises, YOU can keep the health inspector happy, YOU can stay ahead of the competition and YOU can work the stations for the employees who call in or simply don’t show up.”

“Here’s the deal,” he continued, “Applebee’s is hiring across the street, Starbucks is also looking for a manager and Dickens Gourmet Burgers offered me full dental and medical, four weeks vacation and a two thousand dollar signing bonus yesterday. That will help me, my family and especially Tiny Tim. I’m confident I can seek acknowledgment elsewhere and contribute to another team’s progress. So, yeah, you can happily take possession of my position. I’m outta here. Good day, sir.”

Jake & Eb’s closed its doors forever two weeks later on Christmas Eve, which Scrooge of course blamed on fickle customers and ungrateful employees. But like the three spirits that were to visit him later on Christmas Eve, his sour demeanor and management philosophy was too rooted in a time long ago: the Ghost of Leadership Past.

What happened next, meanwhile, was a harbinger of the Ghost of Restaurants Future. Uber Eats leased the kitchen from the building owner for its delivery menu, inspired by the Ghost Kitchens of Restaurants Present. Amazon leased and converted the dining room into a staging area for its new delivery drones.

The restaurant was converted by the twin forces of uninspired leadership and disruptive technology. Scrooge completely embodied the former and incessantly blamed the latter.

How might this story have ended differently if the angelic spirit of Christmas Past had arrived sooner and shown Scrooge restaurant scenes from his past, full of the generous mentors, jovial guests, and fraternal workmates that characterize success in this industry? Perhaps then he would have been reminded of the true meaning of Hospitality: If you’re not serving the customer directly, you must be serving someone who is.

But unlike a classic Charles Dickens tale, change in real life is a process and that transformation does not happen overnight. It’s a marathon, not a sprint. Whatever future challenges we face in our restaurants and in our industry, we need to rise and think beyond our own expertise, align our companies to industrywide best-practices and apply constant, gentle, steady pressure to improve every day.

Commit to small incremental improvements daily in both the work life and skillsets of our teams and experiences and memories of our guests. Don’t just let your future happen, make it happen.

And God bless us, every one.

Jim Sullivan is the author of two of the all-time bestselling books and audiobooks in the foodservice industry Multiunit Leadership and Fundamentals. He is a popular speaker at leadership conferences worldwide. Jim has over 400,000 social media followers and you can connect with him at Sullivision.com, Twitter, YouTube or LinkedIn.