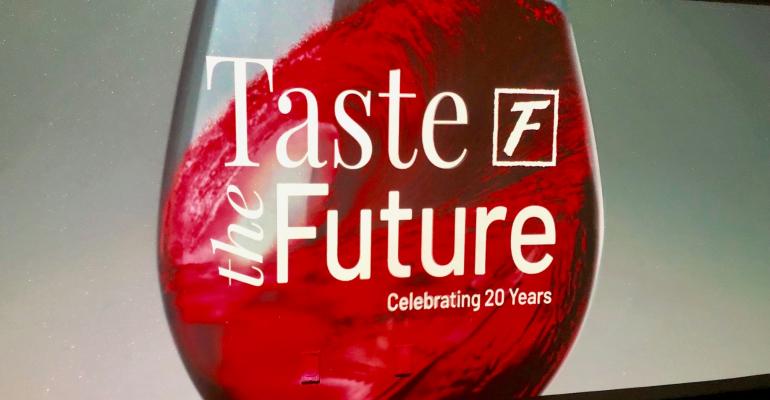 As the leaders of Fleming’s Prime Steakhouse & Wine Bar discussed how to celebrate the 20th anniversary of the brand’s first restaurant, chef-partner Kevin Monahan said he wished he could give guests an inside look at the inspiration behind the Chef’s Table menu.

That included telling people about his grandma’s Fig Upside Down Cake, a special dessert on the carefully curated menu.

“If people can just talk to my grandmother about why she’s so passionate about the dish,” Fleming’s President Beth Scott said, recalling Monahan’s suggestion.

Fleming’s, whose parent company is Tampa, Fla.-based Bloomin' Brands, took that idea and rolled with it. 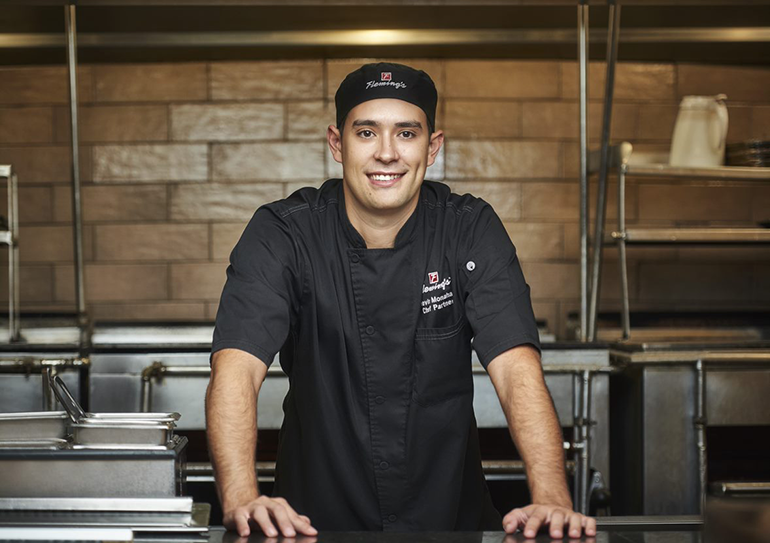 Monahan and other artisans narrate stories about each coursed dish.

At the inaugural Taste the Future event, the dining room “theater” walls projected an aerial view of the picturesque Baja California coast as guests were served a striped bass dish. Waves crashed against rugged, rocky shorelines. A school of sea bass blanketed the screen.

The visuals and Monahan’s narration give diners a glimpse behind the plate: “I am inspired by the people who are dedicated to their craft," he narrates. "When I learned the story of the sustainable striped sea bass farm in Baja, I felt like the coast was calling me. It was meant to be part of this menu.”

Scott said the goal is to “transport guests to the time, place and season that their food is from with sensory surprises throughout the five-courses.”

When a Wagyu ribeye medallion with roasted root vegetables is served, the film shows chef Monahan using his expert knife skills to cut the delicate vegetables. He can smell their freshness, and he relays that to guests in the voiceover.

“It’s like eating a plate out of the garden,” he said.

Sanjiv Gupta, operating partner at Fleming’s in Newport Beach, acts as the host of the evening. He often tells a story about the wine paired with each meal.

The striped bass dish, for example, is paired with a Robert Mondavi Fume Blanc. The screens show the rolling hillsides of Mondavi’s Napa Valley vineyards.

Gupta, glass in hand, tells diners the legendary story of how the famed vintner created and coined the dry, barrel-aged Fume Blanc.

Gupta, who along with Monahan was awarded Fleming's Partners of the Year in 2018, also gives tasting notes to guests. In the fourth course, a Cabernet Sauvignon Reserve from Daou in Paso Robles, Calif. is paired with the Wagyu dish.

“It should be luscious and silky to your mouth,” Gupta says.

Taste the Future is not just a Disneyland-style visual show.

It’s also a sensory experience that brings “storytelling to the next level,” Scott said.

At the center of tables, draped with starched white tablecloths, is a box filled with items diners can touch or smell. Each item has ties to the dish they are being served. 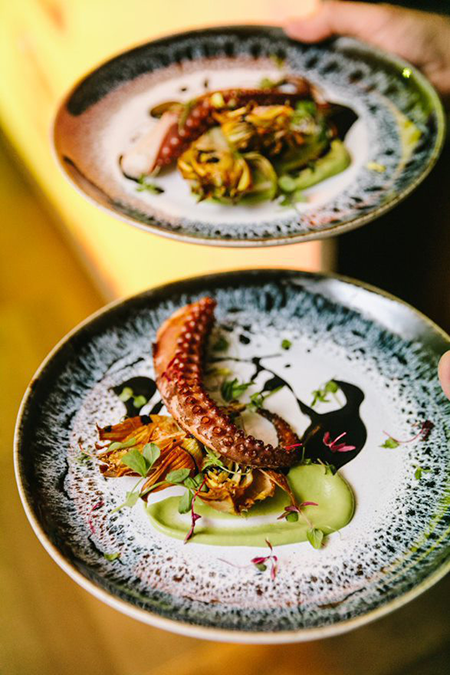 The first course, for example, is Alaskan octopus (left) served with a squid ink reduction. In the box, diners can touch a piece of the white coral used as a home for the octopuses. Diners can also grab a few slivers of mesquite wood, the same kindle Monahan uses for the second course: smoked tomato soup.

“It’s an all senses immersive experience,” Scott said. “It is a creative way to do farm to fork in a different way.”

After fine tuning the system for several months, Fleming’s in Newport Beach debuted the first event Aug. 1. The chain plans to offer the experience, which cost $200 per person, once a month. The next one is scheduled Sept. 7. Fleming's declined to offer the captial investment.

In addition to the monthly events, Fleming’s said it is open to create a customized experience for private or corporate events. It could be a curated Paris-themed birthday with a French-inspired menu and a visual journey throughout the City of Light.

“We are letting it take a life of its own,” Scott said.

And, for now, she said the immersive experience is only available at Fleming’s in Newport Beach, founded in 1998 by veteran restaurateurs Paul Fleming and Bill Allen. 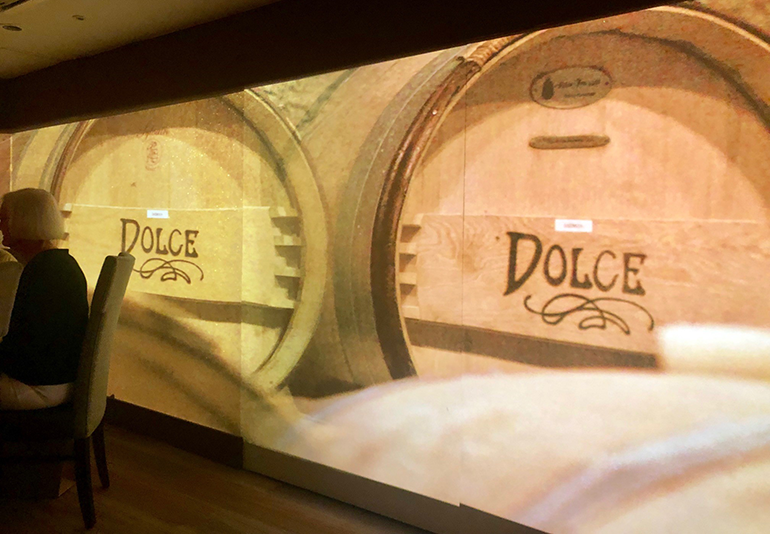 There are no plans to roll out Taste the Future to the rest of the 69-unit chain, which has been busy upgrading older venues.

The Fleming’s in Newport Beach is among a handful of restaurants that have recently been remodeled to “deformalize” the look of the dimly-lit steak house, Scott said.

Eight remodels will be completed in 2019. The changes include adding more natural light and “getting rid of the dark smoky club atmosphere,” she said.

Is Fleming’s trying to attract a younger demographic?

The idea is to be more relevant by providing guests of any age the kind of experiences they are looking for today, she said. That philosophy is what led to developing Taste the Future, an attempt to turn “fine dining” to “fun dining,” Scott said.

“People want something that is more fun and interactive rather than getting steak on a plate,” she said.

Updated: This story has been edited to add more remodel details.