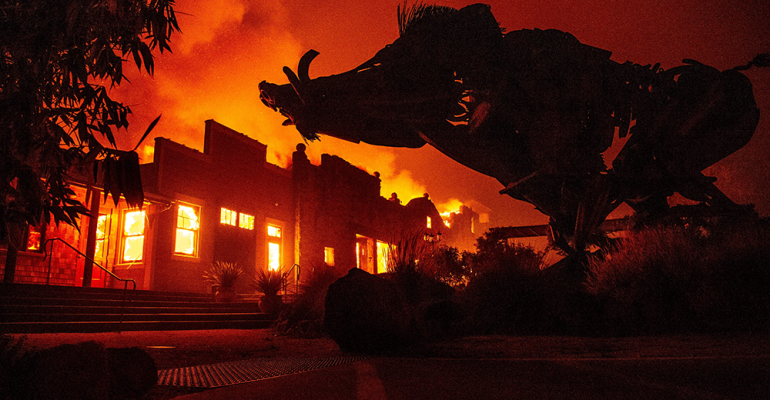 Restaurants across the San Francisco Bay area were closed over the weekend as fire continued to rage through parts of Sonoma County and other areas, and power outages and evacuation orders kept residents on edge.

By Monday morning, the wind-driven Kincade Fire in Sonoma County had reportedly grown to more than 66,000 acres and destroyed nearly 100 structures, including the historic Soda Rock Winery. Other smaller fires in Vallejo, Suisun City and other towns throughout the region contributed to a heavy fog of smoke settling over the Bay Area.

The Kincade Fire caused the state’s largest evacuation of more than 180,000, mainly impacting the cities of Geyserville, Santa Rosa, Windsor, Healdsburg and Calistoga. Evacuation orders also reached north into Mendocino County. Power outages stretched across the region, including neighboring Napa County and points south, and the governor on Sunday declared a statewide emergency.

Single Thread Farms, with its acclaimed restaurant and inn, in Healdsburg was closed over the weekend and possibly into this week after a mandatory evacuation warning. On Instagram, restaurant officials said, “We are taking care of our team and supporting our community at the moment and will work shortly to assist with booking information and send our guests updates. Thank you to all of the incredible people within our wine country community and those from outside who are helping those in need and keeping Sonoma safe.”

Others were also closed due to mandatory evacuations, including Willi’s Seafood & Raw Bar, Catelli’s, Guiso Latin Fusion and more.

The French Laundry in Yountville, Calif. was closed on Sunday due to power outages, along with sister restaurants Ad Hoc and Bouchon Bakery.

As has become a sad-but-necessary tradition in fire-prone areas, chefs and restaurateurs joined forces to feed residents taking refuge at evacuation sites.

Tyler Florence was among the chefs working with World Central Kitchen, founded by chef Jose Andres, which served close to 6,000 meals on Sunday at the Sonoma Fairgrounds. The organization was active across the state at various sites, feeding first responders and evacuees at Red Cross shelters.

#KincadeFire update: We served just under 6000 meals today with @WCKitchen here at the Sonoma Fairgrounds. DM me if you want to volunteer anytime this week. We would prefer kitchen experience, but if you have a strong back and can handle a knife, we’ll take you. pic.twitter.com/4Ubo9asjvg

Volunteers are needed, as wind conditions were expected to keep fueling the fires for days.

We know a lot of you want to help! The situation is changing rapidly, but if you're in Northern California & would like to volunteer for our #ChefsForCalifornia relief effort, sign up here: https://t.co/9MPwdNzMbu. Any questions, email [email protected] Thanks for your support!