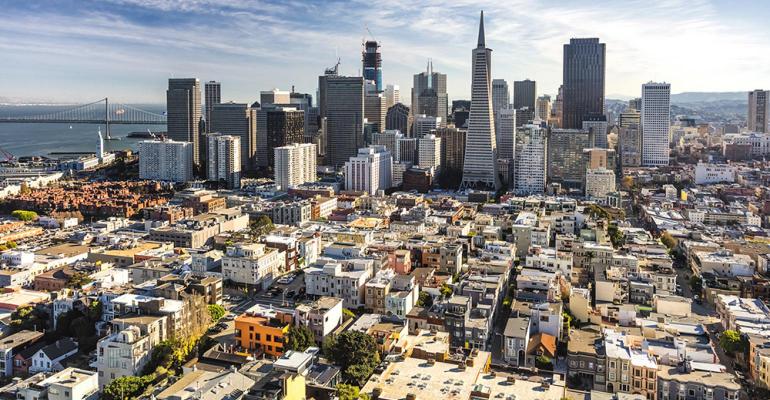 hanusst/iStock/Getty Images Plus
San Francisco is the first city in the country to make their delivery fee caps permanent.
News

As first reported by the San Francisco Chronicle, DoorDash and Grubhub are arguing in their lawsuit that the new requirement is unlawful, and has the potential to hurt restaurants, calling it an "irrational law, driven by naked animosity and ill-conceived economic protectionism” that invalidates lawful contracts between private businesses.

According to the lawsuit, Grubhub and DoorDash are seeking monetary damages and warn that they might need to limit their service in San Francisco or eliminate their operations completely in the city.

"Costs to facilitate food delivery that are not covered by restaurants will likely shift to consumers — irrespective of whether those restaurants would prefer to bear those costs to increase their own sales — thereby reducing order volume, lowering restaurant revenues, and decreasing earning opportunities for couriers," the lawsuit said.

New York, Los Angeles, Washington, D.C. and San Francisco, among other major U.S. cities, implemented fee caps at the beginning of the pandemic last year in an effort to give struggling restaurants “a fighting chance” during the COVID-19 pandemic as dining rooms remained shuttered at the height of public health crisis. But until now, none of these cities had voted to make the supposedly temporary fee caps permanent in a post-pandemic world. San Francisco’s original temporary fee cap was set to expire on Aug. 15 until it was made permanent by unanimous vote by the San Francisco Board of Supervisors.

“Despite temporary price controls in some cities, including San Francisco, Grubhub has invested hundreds of millions of dollars to directly support restaurants across the country since the pandemic began,” a Grubhub spokesperson told Nation’s Restaurant News. “And now, while the pandemic may be nearing its end, San Francisco has enacted an illegal and permanent price control that will harm restaurants, diners and delivery workers across the city. Arbitrary price controls hurt independent restaurants by limiting their access to critical tools that help them find new diners and generate more orders. This suit reflects the myriad legal problems raised by this permanent price control.”

DoorDash added that the law is “unprecedented and dangerous overreach by the government” that will limit options for small businesses.

Last year, third-party delivery services also argued that the fee caps – even temporary — were hurting their business and their clients. In May 2020, the company said they are seeing 10% fewer orders than in the past, though independent restaurants also argued that the exorbitant delivery fees were hurting their business’ chance of survival. Third-party delivery services came up with workarounds in response, like DoorDash beginning to charge restaurants in its DashPass premium platform “contractual” rates.

"I would predict you do not see another permanent fee cap being voted on till the San Francisco situation gets resolved in court," then-Grubhub CEO Matt Maloney said in Grubhub’s Q2 earnings call.