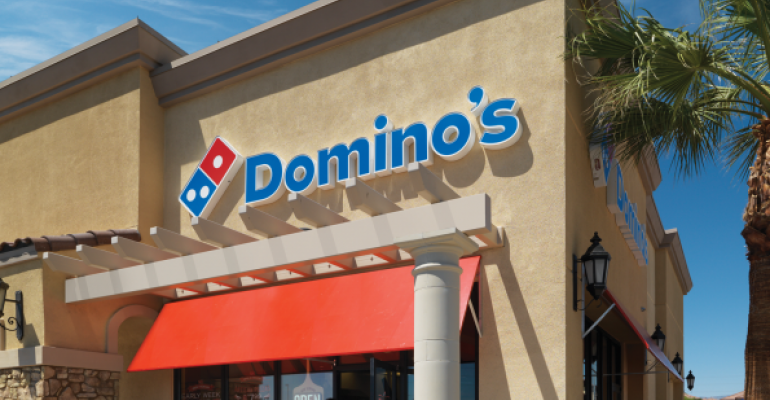 The company’s quarterly same-store sales performance fueled a decline of more than 7% in Domino’s stock price at midday Tuesday.

Allison cited “aggressive activity from third-party delivery aggregators” as putting pressure on same-store sales, particularly with their discounting and advertising campaigns. He said he does not “expect that to slow down anytime soon.” He added that Domino’s needed to continue responding to that pressure.

“We have got to be the best at getting to the door on time every time, and we currently have a big push internally to take service to the next level,” Allison said.

But even with the mounting pressure on same-store sales, Domino’s has doubts that the third-party aggregators will continue to cause headwinds further in the future.

“We have significant questions about the viability of their business model,” Allison said. “We continue to hold the belief that ultimately this is extracting profitability out of the restaurant industry. … Ultimately it will come down to whether franchisees are making more or less money on those platforms. We don’t expect pressure from these third-party aggregators to subside … but there will be survivors in this business and some of these aggregators won’t be around in the future. That’s my hypothesis.”

Despite the disappointing quarter, Domino’s remains on track to meet the lower end of its five-year outlook.

Allison emphasized the importance of the company’s fortressing strategy, saying that opening more stores in close proximity to one another will be “a critical component of improving service to customers” in the long-run. The technology-focused brand also continues to invest in new automated and artificial-intelligence-driven innovations that have set the brand apart from its other quick-service pizza delivery competitors.

Allison said Domino’s would be rolling out GPS tracking technology later in 2019, an initiative that was originally announced in April as part of a pilot program in 27 corporate-owned stores in Phoenix. The purpose of the technology is twofold, Alison said: “to put some fantastic technology in the hands of customers” but also to give consumer data information to restaurant operators.

On the menu side, Domino’s did not make any major food innovation announcements, stating that the company is careful when adding new limited-time offers.

“A lot of our competitors roll out LTOs on a regular basis, but we don’t like the economics and complexity of that,” Allison said. “But we are in the food business and we know menu innovation is important. … For a product to come onto our menu it has got to drive incremental transactions. We want to make sure any new items are contributors to long-term profitability.”