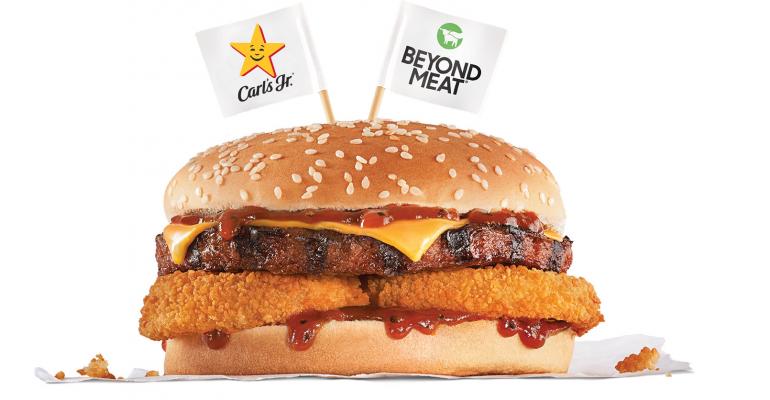 Carl's Jr. is the latest to expand plant-protein menu

Alternative meat is moving from innovation to ingredient

Beyond Meat and Impossible Foods burgers broke into menus with the sort of enthusiasm that can't be sustained. While the excitement has settled down, operators say interest is continuing, if evolving. Now, many restaurants and chains are expanding their alternative meat menu and using those products as one of many ingredients, rather than the sole focus of a dish.

While the number of people who follow vegetarian or vegan lifestyles isn’t growing particularly fast, people who choose to have meatless meals sometimes and those who want to have alternative proteins has risen in number, said Gary Stibel, founder and CEO of New England Consulting Group. People will continue to ask for these products, and having them on the menu is a good look for restaurants, he said. "It also casts a positive halo across the whole restaurant," he said.

Today Carl’s Jr. launched its second Beyond burger menu item, the Beyond BBQ Cheeseburger, available at most of their approximately 1,100 restaurants. Back in December, the Franklin, Tenn.-based chain, a subsidiary of CKE Restaurants, was one of the first national burger chains to serve a Beyond Meat product when it launched their Beyond Famous Star burger.

The second burger was added due to customer and franchisee demand, said Patty Trevino, senior vice president of marketing for Carl's Jr. Sales of the Beyond Famous Star burger have “definitely continued to deliver above our expectations even after the introduction of Burger King's Impossible Burger,” she noted.

Carl’s Jr.’s Beyond BBQ Cheeseburger is a meatless version of the chain’s Western Bacon Cheeseburger and includes onion rings, American cheese and barbecue sauce. Unlike the Western Bacon Cheeseburger, it’s without the bacon. But Trevino said these Beyond burgers are fairly interchangeable with Carl’s Jr.’s traditional beef patties. Should a customer want to try bacon on their Beyond burger, "the customer's flavor buds are always right," she said. In fact, Trevino has tried bacon on the Beyond burger and deems the combination "delicious."

It's this sort of flexibility that can help these new menu items find fans beyond those who typically shun meat entirely. Carl's Jr.'s guiding philosophy is to "be flavor first and not having to categorize our consumers into targeted audiences like vegan, vegetarian, flexitarian," said Trevino. 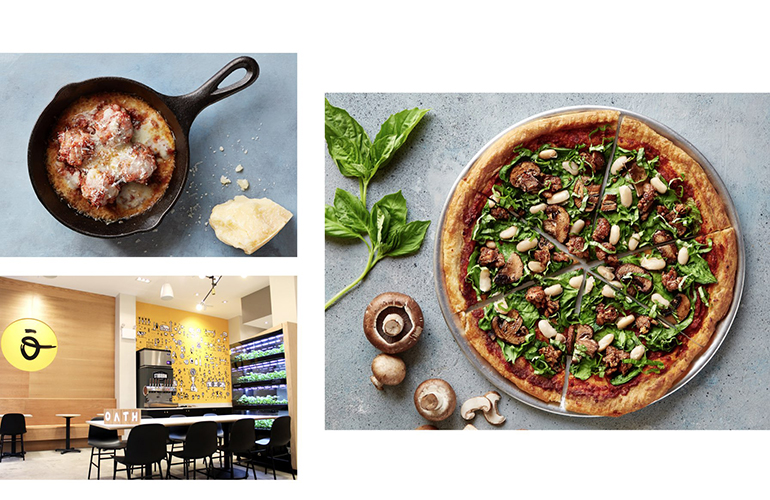 While Carl's Jr. is known for its burgers, other restaurants might be wise to think outside the patty as they expand their alternative meat menus, said Stibel. Using these plant-based proteins as an ingredient rather than the spotlight "permits you to mask the taste, texture and cost of the alternative meats."

In that spirit. Oath Pizza, a 50-unit chain based in Boston, has recently added meatballs made with Beyond Meat as a pizza topping and as the key ingredient in two meatball dishes. Tokyo and Los Angeles-based Jinya Ramen Bar, with about 40 locations, announced a variety of dishes using plant protiens, including a Beyond Meat bun.

Another approach to these new meats is sausage. Sausages have varying textures, and much of their flavor comes from seasonings rather than the meat itself, giving their creators considerable leeway. Over the past few months, Little Caesars has worked with Impossible Foods on a "sausage" pizza topping and Dunkin' and Tim Hortons have both worked with Beyond on a breakfast sausage patty.

Qdoba Mexican Eats is expanding its Impossible menu after the brand introduced an Impossible taco and bowl in May at over 700 restaurants. Earlier this month, the brand added an Impossible Fajita bowl and burrito. Qdoba's version of Impossible is mixed with tomatoes, red onions, garlic, smoked chiles and paprika.

Still, restaurants continue to introduce burgers made with meat alternatives at a rapid pace. As they do so, Stibel cautions brands from referring to these new items as burgers, lest they be compared and found wanting. McDonald's had the right idea, he said, when they called their new Beyond Meat test the ‘P.L.T’ or plant, lettuce and tomato. Leaning into the "plant" in plant-burger was the way to go.

"They're creating a whole new way of approaching the category," Stibel said. "The right way to market these products is not by saying they're as good as hamburgers because they are not."