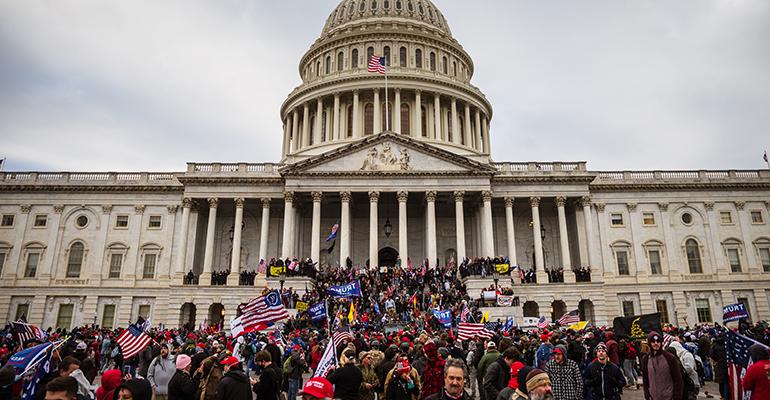 District of Columbia restaurants felt reverberations from Wednesday’s attack on the U.S. Capitol by extremists after the mayor imposed a 12-hour curfew.

The attack by pro-Trump extremists on the Capitol interrupted the joint session of Congress that early Thursday accepted the Electoral College vote that cleared the way for Joe Biden’s inauguration as president on Jan. 20.

The storming of the Capitol came amid counting of Georgia special Senate election ballots that shifted leadership of that body from Republican to Democrat with the projected incumbent upsets by Jon Ossoff and Raphael Warnock.

Before the Capitol violence, Senate Minority Leader Chuck Schumer (D-N.Y.) said Wednesday that one of his first priorities in the 117th Senate, after the Georgia races are certified, will be to pass legislation to increase stimulus payments to Americans, which had been blocked by Majority Leader Mitch McConnell (R-Ky.).

“One of the first things that I want to do when our new senators are seated, is deliver the $2,000 checks to the American families,” Schumer said at a press briefing. The late-2020 coronavirus relief package provided $600 direct payments for those below certain income levels, although President Donald Trump and Democrats had pushed for larger amounts.

After the Capitol incursion Wednesday afternoon, D.C. Mayor Muriel Bowser imposed a state of emergency and curfew in the district from 6 p.m. to 6 a.m. Thursday with just a few hours of notice.

Reminder: A citywide curfew for the District of Columbia is in effect from 6:00 p.m. on Wednesday, January 6, until 6:00 a.m. on Thursday, January 7.

The Founding Farmers brand paused service at its D.C. restaurants mid-afternoon because of “the escalation of today’s protests and Mayor Bowser's 6 p.m. curfew.” The brand’s Twitter account also advised: “Stay safe & be kind.”

Due to the escalation of today’s protests & Mayor Bowser's 6pm curfew, Founding Farmers DC, @FarmDistillDC, and @FarmFishBakeDC have paused service for the rest of the day. We will re-open tomorrow for breakfast. FF MoCo, Tysons & Reston Station remain open. Stay safe & be kind.

Chef Geoff Tracy of Chef Geoff’s in D.C. called the events of the day “the most embarrassing day for my country in my life.”

Tracy added that there had been “multiple threats against my restaurants including an evacuation at one. Need for police at another. Grievous abuse to my staff.”

Tom Bené, president and CEO of the National Restaurant Association, issued a statement Thursday saying, “Americans from all walks of life are saddened at the disorder and violence in our nation’s capital amidst what is the most sacred tradition of our democracy – the peaceful transition of power.”

Bené added that the trade group anticipated working well with the new administration.

“We look forward to working together with Congress and the White House to advance our nation’s recovery by addressing the devastating issues facing our industry and this country,” he said.

In November, Bené had highlighted the hurdles that restaurant operators faced amid an uncertain economic recovery in the wake of the COVID-19 pandemic.

Wednesday’s occupation of the Capitol only added to a year of problems faced by restaurant operators.

Andy Hooper, president of &Pizza, which is known for its advocacy, in a note to his LinkedIn community Thursday said the events were “a lot to digest.”

“D.C. residents, many of whom are &pizza family members and guests, endured a coup in their own neighborhood, went under curfew at 6 p.m., and feared for their personal safety and even their lives,” Hooper said. “In cruel irony, none have any representation in the very Congress that was attacked.”

Hooper added that he condemned “what transpired yesterday; the violence and hatred, and the corresponding assault on our nation and the will of the people.”

Jose Andres, the chef who owns Jaleo, China Chilcano and the temporarily closed Minibar and Barmini in the district, and his non-profit World Central Kitchen delivered meals during the insurrection.

It’s late here in Washington DC and we @WCKitchen just finished delivering the last meals. But after today’s attack on our democracy...I couldn’t go home without seeing the National Archives, where our nation’s founding documents live. #WeThePeople pic.twitter.com/kgPkxQYGWf