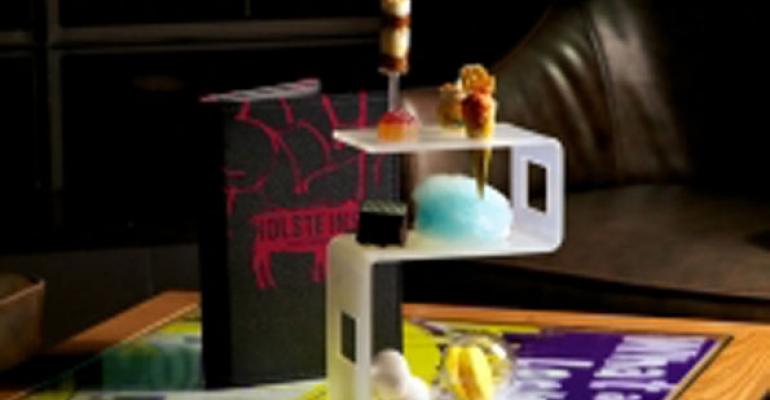 Rebecca Bills, corporate executive pastry chef for Block 16 Hospitality, which operates Holsteins, among other restaurants in Las Vegas, had a stand custom-made for this $15 sharable dessert, each component of which can inspire ideas for other pastry chefs.

The dessert’s specific elements change seasonally, but this fall and winter it includes a miniature pecan pie push-pop, featuring a gooey pecan filling layered with whipped cream and vanilla shortbread crumbs in a miniature push-pop container.

The cone is a miniature pumpkin cheesecake drumstick, for which the tiny cone is filled with a no-bake filling of cream cheese, lemon juice, sugar, pumpkin puree, ginger, nutmeg, cinnamon and whipped cream. She garnishes it with pumpkinseed brittle.

Bills makes two pâtes de fruit — pear and pomegranate — out of which she makes a double-layered gummy that she molds to look like a gumdrop coated in granulated sugar.

Also on the stand is a vanilla cupcake with confetti sprinkles mixed in. It’s frosted with vanilla buttercream and dusted with more sprinkles.

She makes mint marshmallows in sheet pans, cuts them in squares, and dips them in chocolate. She places those on transfer sheets that give it its green pattern.

Holsteins also has a miniature table-top cotton candy machine that Bills uses to garnish desserts, such as the bubblegum cotton candy she puts on top of her watermelon bubblegum slushy. For this season’s candy store the cotton candy is blue raspberry.

She also makes a peanut butter cup by whipping peanut butter with sugar and salt, piping it into a dark chocolate shell and topping it with graham cracker crumbs.

On the bottom of the stand are two separate treats served in plastic balls similar to what was used to hold toys in vending machines. One holds two passion fruit macarons, made with a yellow-tinted shell filled with passion fruit curd.

She also makes classic meringues flavored with cinnamon. She pipes them into their traditional shape, similar to large chocolate chips, and then at service dips them into liquid nitrogen to make them very crispy. They also appear as if they’re smoking: If you eat them right away, you exhale the vapor.