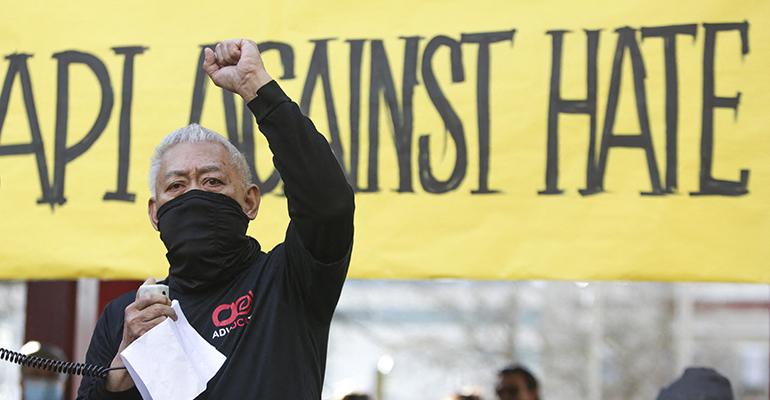 JASON REDMOND / Contributor / AFP
Frank Irigon with the Organization of Chinese Americans (OCA) speaks during the "We Are Not Silent" rally against anti-Asian hate in response to recent anti-Asian crime.
News

Some Asian-American restaurateurs have been experiencing increased threats and vandalism over the past several weeks, and their fears have increased with the eight fatal shootings Tuesday at massage businesses in the Atlanta area.

At Noodle Tree in San Antonio, Texas, owner Mike Nguyen, who is recovering from lymphoma treatments, closed his dining room Thursday after a “serious active threat” against himself and his restaurant. He had gone on CNN last week to express his opposition to Texas Gov. Greg Abbott lifting the statewide mask mandate, and that ignited a wide variety of threats.

Then the Noodle Tree was hit with racially derogatory graffiti over the weekend, and patrons helped Nguyen remove it.

"When you see pictures is one thing, but when I actually walked to the restaurant, physically saw with my own eyes, I was enraged," Nguyen told the San Antonio Express News. "I was upset."

And the threats continued into the workweek as well.

“We will not be allowing anyone to dine in today,” the restaurant posted on Instagram Thursday, “until we can have [a] police detail outside our restaurant.” Noodle Tree is open Thursdays to Sundays

The Asian American Pacific Islander community has seen threats increase and become more overt since the COVID-19 pandemic was declared last March.

Larger restaurant brands were offering support to the AAPI community and noted that the grief was shared with others in the industry. “There is no room in this world for racial hatred and discrimination,” said Pasadena, Calif.-based Blaze Pizza in a Tweet on Thursday.

“We all have a part to play in promoting an anti-racist culture, and we stand in support of our Asian team members and guests,” the 340-unit brand said.

We are grieving with our AAPI communities. #StopAsianHate pic.twitter.com/afK3ogJ0nM

A report by the group Stop AAPI Hate found that 3,795 incidents against Asian Americans between March 19 and Feb. 28.

Stop AAPI Hate​, which was founded by the Asian Pacific Policy and Planning Council, Chinese for Affirmative Action and San Francisco State University’s Asian American Studies Department, said, “The number of hate incidents reported to our center represent only a fraction of the number of hate incidents that actually occur, but it does show how vulnerable Asian-Americans are to discrimination, and the types of discrimination they face.​”

The report last month found that California led among incidents reported, with 1,691 in the nearly year-long period. That made up 44.6% of reported incidents, followed by New York with 517, Washington State with 158 and Texas with 103.

About 11.1% of cases were physical assault, the Stop AAPI Hate group said.

Xi’an, which was named as a Nation’s Restaurant News Breakout Brand in 2016, has eight restaurants in the New York City area.

Wang said the attacks on his staff members came during the daytime. A male employee, who was taking the subway to work, was accosted when a stranger followed him off the train “and basically punched him in the face.”

Wang said his company was at 14 locations before the pandemic, but now eight are open.  Most of the closures were in midtown Manhattan. Overall, he told the Gothamist, sales are about 30% of what they were pre-pandemic.

“When these things happen,” said Wang, “it makes our employees feel uneasy to go to work. Uneasy to take the train, uneasy to walk outside. And that’s really a problem because people aren’t able to live the way they usually live.”

Xi’an is also closing its remaining restaurants earlier than before the attacks.

"Before the pandemic, we used to close at maybe 9:30 or 10:30. But now all of our locations close at 8:30," Wang told CBS News. "Our employee safety is always No. 1 on our list, because we have to make our employees feel safe before we're able to do business."

Other Asian-American restaurants have experienced vandalism and thefts.

The Urban Hot Pot in Maryland was among four restaurants burglarized and vandalized in mid-February.

Cash and safes were stolen from Urban Hot Pot, Kung Fu Tea and Bonchon in the Columbia Mall as well as East Moon Asian Bistro in Ellicott City, Md.

Meanwhile, a number of restaurateurs around the nation were initiating fund-raisers for Asian American groups.

Among those was Chao Baan in St. Louis, Mo., which was donating 10% of dine-in and carryout sales from Thursday dinner service to the Stop AAPI Hate coalition.