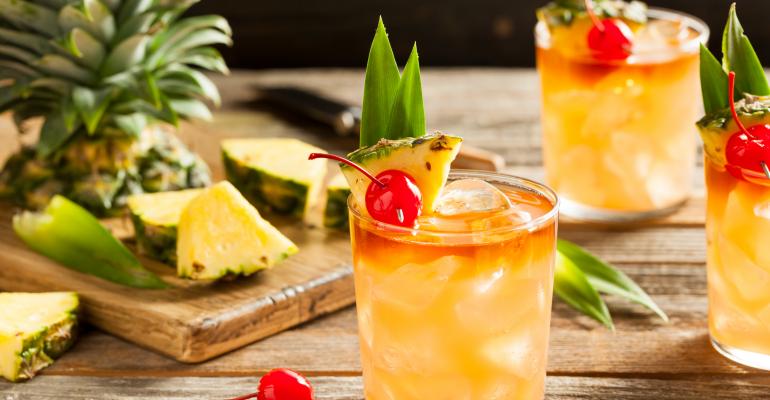 The tiki trend has gone through several iterations over the decades, and now it’s back with new flavors, high quality ingredients and clever presentations. Operators are combining rums, juices, purees and syrups to make clever drinks which blend creativity with a nod to history.

“Tiki was the original craft cocktail,” says Brad Smith, general manager and head bartender at Beachbum Berry’s Latitude 29 in New Orleans. “Bartenders have come to realize the true importance of tiki. They are very well balanced drinks that are well thought out.”

The history of tiki culture began in 1934, when Ernest Raymond Beaumont Gantt opened Don the Beachcomber, a bar and restaurant in Hollywood, and Victor Bergeron opened Trader Vic’s in Oakland, California. The Polynesian-themed bars served cocktails which emphasized rum and fruit flavors, such as the Zombie and the Mai Tai. Over the years the tiki trend faded, saw a resurgence in the 1990s, and then faded once again.

But now the tiki trend is back with a focus on flavor. “You see a preponderance of fresh fruit juices, bespoke ingredients, fresh flavors,” Smith says. “The thing about tiki is that they did that in the 1930s. They were using the fruit juices. It was about making things from scratch.”

At Latitude 29, the Zombie features light, dark and overproof Caribbean rums, lime, grapefruit, cinnamon and “Undead Mix,” which Smith says is a proprietary blend which includes pomegranate. There is also the Mai Tai, with aged Martinique and Jamaican rums, curaçao, lime and orgeat, which is an almond syrup.

Zachary Sipherd, general manager at Adrift in Denver, says the history of tiki drinks lends itself to real fruits and house-made syrups. “In the 1940s there weren’t a lot of ingredients --- basically alcohol, ice and citrus juices,” he says. “Now we have bar chefs, people who are capable of making the syrups and creating a wide spectrum of flavors.”

Adrift makes its own orgeat and falerum syrups, both of which are very popular now in tiki drinks, Sipherd says. The orgeat syrup entails a process of boiling almonds, letting them dry, blanching them, making a paste, squeezing the paste to create a milk, and then adding spices. “It creates a nice gooey liquid which binds and solidifies the cocktail,” he says. The falerum contains cloves, lime zest and allspice. Adrift also makes cinnamon, passion fruit and guava syrups.

Operators say tiki drinks do not have to stick to a strict recipe, but they must have a fun theme. “Everybody can do what they want; it’s limitless,” says Nell Mellon, an owner and manager of Otto’s Shrunken Head in New York. “It’s hard to say what the trend is because there are so many different combinations — anything goes.”

She says when Otto’s Shrunken Head opened 15 years ago, she and her partners stuck with the traditional flavors such as pineapple and coconut. They’ve expanded the tiki drinks menu to include guava, mango and other flavors. Today one of the newest drinks includes lychee syrup, lychee liqueur, passion fruit slush ice and pineapple. It’s called The Squealer and is served in a pig-shaped mug. Another popular cocktail is the Lost Soul, with coconut rum, pineapple rum, banana puree and a teaspoon of ice cream floating in it, and a glow stick. “It looks like a ghost,” Mellon says.

Rum is not the mandatory alcohol for tiki drinks. At Ace Eat Serve in Denver, one popular cocktail is the Mount Fuji, which contains fresh lime juice, orgeat, Nigori sake, green tea infused gin and coconut juice. Bar manager Tristan Paulo says the most important elements in the drink are the tropical fruit notes, spiced syrups and the fun presentation. “Unexpected ingredient combinations are usually what I look for in a tiki drink,” she says.

The tiki trend is spreading beyond the island-themed bars and becoming popular in other establishments. Sonny’s Hideaway in Los Angeles added its Tiki Tuesdays soon after it opened in 2013. The bar staff creates their own tiki cocktails, and the menu changes frequently, with five or six new drinks added every two months. “We’re building off of those original cocktails,” says bartender John Paul Curtin. “Some are fun and kitschy, but most are focused on fresh ingredients, sometimes using spirits and liqueurs that you wouldn’t find in typical tiki drinks.”

Duke McCaffrey, also a bartender, says Tiki Tuesday is consistently the busiest weekday at Sonny’s Hideaway. “People like to put on their floral dress or Hawaiian shirt, and they have fun making a night of it,” he says. “They’re coming and staying longer than they would otherwise and trying some cocktails they wouldn’t get anywhere else.”