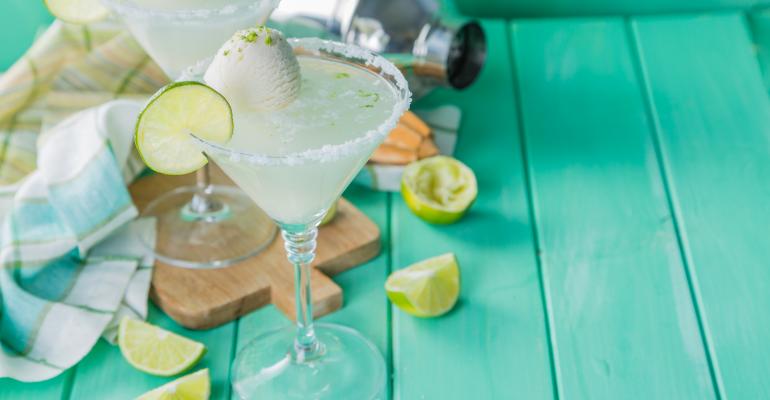 Fortunately for restaurant operators and their customers, there is an open border between cocktails and desserts. The interplay of ingredients, flavors and themes inspires menu creations across both of those appealing menu categories.

After all, cocktails and desserts share a common currency. They include ingredients which speak to the craving for indulgence, such as sweeteners of all sorts:   nuts, fruits, spices, flavored syrups, purees and coulis, whipped cream and meringue. At the same time, savory ingredients such as fresh, local produce and herbs can play in both realms.

The cross-pollination of cocktail and dessert ideas is evident in the field. Take the boozy Nameshake, a vanilla ice cream, butterscotch and caramel shake spiked with Scotch whisky, a signature of Butter & Scotch in Brooklyn, New York.   Bittersweet in Raleigh, North Carolina, plunks a scoop of vanilla ice cream into a glass of chocolatey ale to create the adult Chocolate Stout Float. Chicago’s Rockit Bar and Grill riffed on a traditional sweet treat with Bridget’s Banana Bread, a seasonal cocktail of rum, cognac, banana-flavored spirits and toasted almond cinnamon orgeat, garnished with a sugar-rubbed, torched banana slice.

“Turning cocktails into desserts and desserts into cocktails are definitely fun things to do,” says Kathy Casey, president of Kathy Casey Food Studios-Liquid  Kitchen, a consultancy based in Seattle. “People definitely like that kind of playfulness on the menu.”

Casey has designed signatures on both sides of the cocktail-dessert equation. One of her credits is the Lemon Meringue Cocktail, inspired by the flavor of the traditional pie, made with vodka, Italian brandy liqueur, lemon juice, simple syrup and a meringue topping. Another example is her Dish D’Lish Over 21 holiday fruit cake, rich and fragrant with bourbon-soaked fruits and nuts.

“S’mores is another common dessert idea that people have done a lot with,” says Casey. “And margaritas can be turned into great pies, desserts and panna cottas.” She also has worked on applications of Bananas Foster, coconut cake colada shots and a Harvest Pumpkin Toddy, a warm riff on pumpkin pie.

When innovating with drinks and desserts, Casey urges restaurant operators to review their ordering lists for ingredients that may have common applications at the bar and at the dessert station. “Often there are many things that can be cross utilized,” says Casey.

Although some operators have the skilled staff and labor budgets to create drink and dessert applications from scratch, others may find it more practical to work with high quality commercial products, such as flavored syrups and purees. “There are so many choices on the market that you can just get crazy with them,” says Casey. In particular, flavored syrups “make it easy to do lots of different things.”

In both drinks and desserts, Casey sees drier, more savory ingredients and flavors trending. “Herbs like rosemary, thyme and sage are being used to lend a dry, balanced note,” says Casey. “People are drinking so much drier that  it’s very important not to go too far with the sugar level.”

At True Food Kitchen, a health-driven yet flavor-forward dining concept with 16 locations in the Phoenix-based Fox Restaurant Concepts group, the Ginger Snap cocktail is a popular sippable dessert.

The familiar flavor of ginger snap cookies is the key to the dessert’s appeal. “We always had a box of ginger snaps in the house when I was growing up,” says Jon Augustin, True Food Kitchen’s beverage director. “It is a very nostalgic flavor.”

Warm almond milk makes the drink soothing after a meal as well as an appealing choice for a brunch cocktail in colder weather. “Guests may prefer a warm drink like this rather than a mimosa when it’s cold outside,” Augustin says. Furthermore, the drink has a wide potential audience, suitable even for patrons who avoid dairy products and refined sugar, thanks to its use of almond milk and maple syrup.

For True Food Kitchen patrons seeking a dessert drink free of alcohol, Matcha Horchata fills the bill. It is a version of horchata, the Mexican rice-based beverage, flavored with clove, vanilla and matcha, the antioxidant-rich Asian green tea powder. “I like to use matcha because it doesn’t give you a caffeine spike and crash like coffee,” says Augustin.

The above ideas are just the beginning for cocktail and dessert creators. The common ground between these two appealing menu categories offers a vast array of ingredients, flavors and themes remaining to explore and cross utilize.