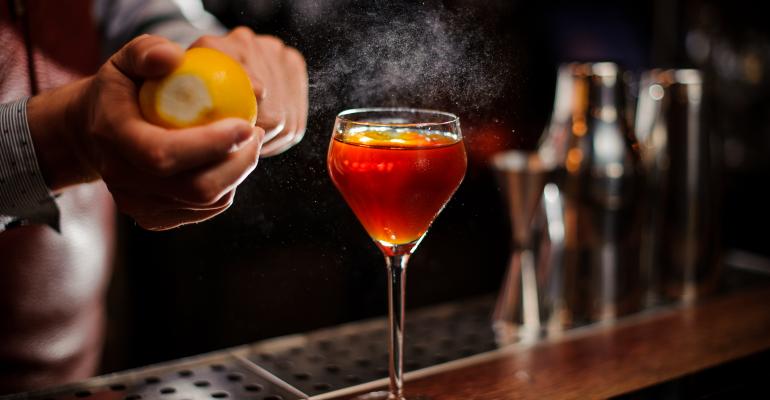 Some barkeeps manage the challenges of modern mixology by collaborating with the kitchen, using classic cocktails as templates for invention, establishing efficient bar prep systems and selecting high-quality prepared products.

Look to the kitchen

It’s wise for a cocktail bar to be in synch with the kitchen for inventory and inspiration. That’s the approach of Dan Rook, beverage manager at The Kimpton Everly Hotel in Hollywood, Calif. Some of Rook’s culinary cocktails at the Ever Bar are nods to executive chef Bryan Podgorski’s work at Jane Q, the hotel restaurant.

For example, Rook uses the chef’s duck confit bone broth as a savory stage for shochu, orange liqueur, pomegranate and sage in a drink called Bone Thighs and Harmony. In another instance, the chef’s avocado parfait stirred the creation of a gin and avocado drink. The kitchen also shares seasonal produce for cocktails.

“Many times, I’ve see things on his menus that are fun to play with at the bar,” says Rook.

Another way to bring order to a bar program is to use classic cocktails as guides for innovation. This can be done by modifying a familiar drink just enough to make it exciting, but still recognizable. Examples include:

“The tried-and-true formulas do work when you put your own signature on them,” says Jeff Cleveland, lead bartender of 4 Saints restaurant at the Kimpton Rowan Hotel in Palm Springs, Calif.

When brainstorming new libations, Cleveland analyzes what makes a daiquiri, martini or other classics tick, and then adds his own flavor tweaks. Take the Old Fashioned, he says. At its simplest, it’s just whiskey, bitters and sweetener. “You can grab almost any spirit off the shelf and follow that formula,” says Cleveland. “By sticking to that template, I have a recipe that I know will work with a little tweaking.”

His Old Fashioned takeoff is Highway 111, a drink featuring date-infused bourbon, rye, Demerara sugar and chocolate mole bitters. The Vista Chino is his interpretation of the Airmail, itself a rum-based spinoff of the classic French 75. He sets it apart by adding fig-infused rum, honey syrup, cinnamon and vanilla.

Operators must decide how much scratch preparation is practical, given the available labor and skill. At Ever Bar, which is rooted in the pre-Prohibition, craft cocktail ethos, the hands-on work is considerable. “When you have a 30-drink cocktail list, there are a lot of moving parts,” says Rook. “I have probably more than 30 or 40 house ingredients.”

Creating an efficient prep system makes the work manageable. Ever Bar has the advantage of having a small prep kitchen equipped with a cooler, induction burners, juicers and workspace. An employee spends an eight-hour day each week there prepping the bar.

Yet even a craft bar may find it preferable to buy rather than make a product. Take bitters, which until a few years ago, bars often made in house. “Is it worthwhile to spend your time and energy and creative capacity making cherry bark vanilla bitters when you can get a really dialed-in, consistent one from a purveyor?” Rook asks.

Buying high-quality commercial products which are exotic or time-consuming to make, such as lychee, orgeat or grenadine syrups, as well as bitters, may present an alternative for operations with limited labor budgets.

Another decision an establishment must make is where to draw the line on spirits inventory. “Some places go nuts and have a library of alcohol,” notes Rook.

Being mindful of local tastes helps operators allocate space wisely. For instance, at 4 Saints, Cleveland stocks 10 premium vodkas. “Palm Springs is a vodka town,” says Cleveland. “People are enamored of a certain brand. And I wanted a menu of things which were easy to drink and refreshing in this hot desert climate.”

An appealing cocktail program is an invaluable boost to a restaurant’s bottom line. Thoughtfully selecting spirits and flavor modifiers is an important step to maximizing this vital profit center.