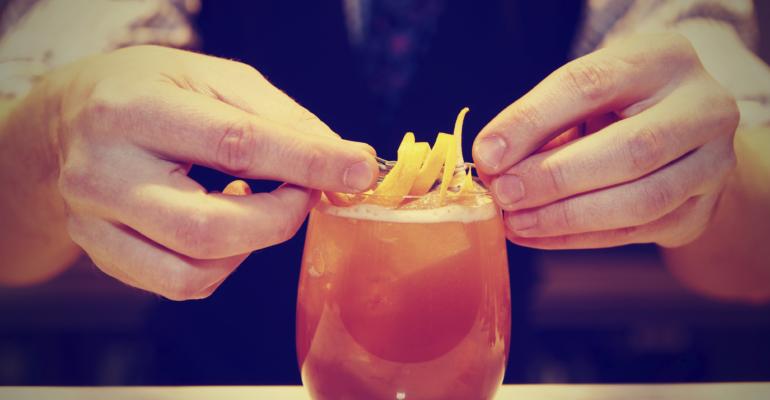 Half the fun of today’s red hot craft cocktail scene is anticipating what will be poured next. Will it be a barrel-aged libation? A culinary cocktail made with savory ingredients?A beer-based or spicy drink?

All are leading beverage trends, says the National Restaurant Association’s What’s Hot 2016 Culinary Forecast — as well as tools for creating excitement and driving sales at the bar.

At Jake Melnick’s Corner Tap in Chicago, beverage director Emilie Sharboneau likes keg cocktails because of their unique flavor profiles and ease of service in a high volume operation. Breakfast of Champions is an example that leverages a savory ingredient — freshly juiced celery — plus locally distilled gin flavored with Earl Grey tea, honey-celery and sweet lemon syrups, and Italian maraschino cherry liqueur, in a glass with a  spice rub rim.

“I didn’t anticipate it taking off so fast,” says Sharboneau of her brainchild. “I thought people might be a little afraid of the celery, but we’ve had a really great reception.”

Another keg favorite is the Modest Mule, inspired by the classic vodka and ginger beer Moscow Mule. This version follows the standard recipe but with small-batch artisan vodka, fresh lime juice and boutique ginger beer. It’s a principle that Sharboneau calls “elevated simplicity,” making a drink simple and approachable but with quality ingredients.

In addition, Sharboneau taps the diverse flavor profiles of craft beer to add topspin to cocktails. With more than three dozen brews on draft at Jake Melnick’s there is ample inspiration. Take the Hop-a-Rhinia, a riff on the  caipirinha cocktail that sports a splash of locally brewed pale ale mixed with the Brazilian sugarcane spirit cachaça, muddled lime and sugar.

In other trends, Sharboneau sees amaros, which are Italian liqueurs with complex, bitter nuances and mezcal — tequila’s smoky cousin — as helpful ingredients for creating drinks with finesse and balance.

“When you look at classic cocktails, there is always something sweet, but also something that brings earthiness or a little spice that makes you want another sip,” says Sharboneau. “At the end of the day, we play a game of balance.”

A judicious amount of heat on the palate may also fine-tune a drink. “People get excited about spiciness in cocktails, but it has to be within reason,” says Sharboneau. “It can get away from you so easily.”

Not so many years ago only a select few cocktail bars prepared cocktails expertly, recalls Chris Sage, bar manager of Euclid Hall Bar & Kitchen in Denver. Today it’s much easier to find a quality drink in many places, whether it’s a proper Old Fashioned or a lesser known libation like the Twelve Mile Limit, a Prohibition-era potion of rum, rye whiskey, brandy, grenadine and lemon, Sage says.

“Cocktails are better made and a lot more accessible,” says Sage. “People don’t have to go out of their way for them.”

Giving cocktails obscure, offbeat names stimulates conversation and creates a welcoming atmosphere at the Euclid Hall bar. “One of the hardest things for us is coming up with names for drinks, more than the drinks themselves,” says Sage. Thus cocktails are tagged with pop culture buzzwords from sources such as the TV series “Seinfeld” and the film “Super Troopers.” “We try not to take ourselves too seriously,” says Sage.

Mezcal is finding its way into drinks as well. “Mezcal is very earthy and smoky and it can be off-putting if you are not used to it,” says Sage. “We like to ease people into the mezcal experience.”

Aspiring mezcal mavens can cut their teeth on the drink called Smothered Me In Gravy You Big Dirty Man, a medley of mezcal, triple sec, Italian herbal aperitif and grapefruit. “It’s kind of a cross between a Tequila Sunrise and a Paloma, but earthier and smokier,” says Sage.

Euclid Hall also offers a rotating barrel-aged cocktail. Currently, it’s a Black Cherry Manhattan, made with small-batch bourbon, Italian cherry liqueur, amaro and aromatic bitters, aged in a used Colorado whiskey barrel for about 30 days. Previously, the bar has poured barrel-aged Old Fashioneds, Aviations and Sazeracs. The staff has discussed doing a barrel-aged Long Island Iced Tea. “A lot of guests get excited about barrel-aged drinks, because it is a process that you have to wait for,” Sage says.