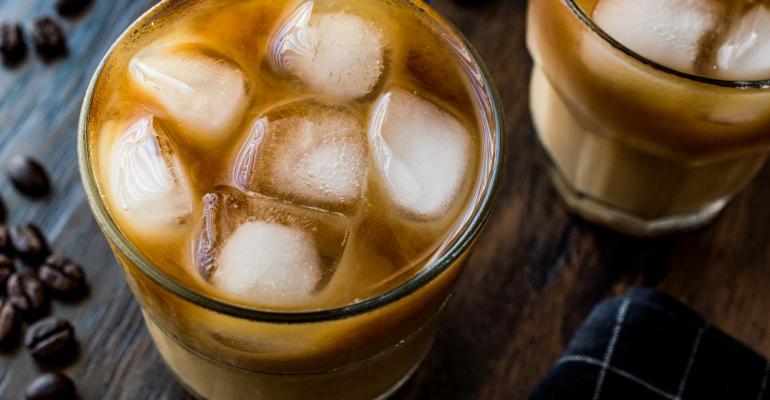 Operators are discovering that they can heat up beverage sales with flavored cold-brew selections.

When the Flying Biscuit Café, a full-service chain based in Atlanta, began testing cold-brewed coffee in several of its restaurants, Vice President Brent Fuller expected the beverage would be popular in the afternoon.

It was. In fact, it exceeded Fuller's expectations, appealing to customers throughout the day. Now available in all 15 of the concept's outlets, cold brew even performs well during the cold-weather months.

“We’re happy with that,” says Fuller. “We thought it might be an afternoon daypart thing, but customers are coming in all day to get it.”

One of the hottest ways to keep beverage sales percolating is with cold-brew coffee and next-level nitro coffee, say restaurant operators. The drinks are gaining popularity as major brands such as Starbucks, Dunkin’ Donuts and McDonald’s help to warm up the public to the idea of cold coffee.

Still growing
“Cold brew is still spreading its wings, although it’s been around for the last 10 years,” says Luigi Ruocco, co-owner of Mr. Espresso, a wholesale supplier in San Francisco.

Cold brew is made by steeping coarsely ground beans in water for 12 to 24 hours. The coffee is then filtered, chilled and served over ice and often with flavored syrups. Nitro coffee is cold-brewed coffee infused with nitrogen and is usually pumped into a keg. The effect of the nitrogen creates a creamy texture. When dispensed, the coffee resembles a glass of stout with a head of foam on the top.

“Cold brew tends to be very smooth with low acidity,” Ruocco says. “It has the potential to be more refreshing, opening up [times] for people to drink coffee.”

Increasingly, operators are betting on cold brew and nitro coffee to boost beverage sales with a variety of techniques and flavors. Here are a few strategies.

“You can use the cold brew as a base and then add flavors that complement it,” he says. “You can create a memorable flavor that’s craveable. If you incorporate sweetness in the form of sugar, you're starting to trigger that craving for a sweeter drink, and cold brew goes nicely with that.”

For the fall season Dunkin' Donuts added a maple pecan flavor to its line of brewed drinks — from hot or iced coffees, to espressos and its cold brew. The maple pecan has a sweet, nutty flavor that blends well with coffee, the quick-service chain reports.

Dunkin' Donuts introduced cold brew last year and the drink quickly became popular with customers, says Jim Cleaves, the manager of Coffee Excellence for Dunkin' Brands. The cold-brew coffee is made in small batches by steeping a special blend of coffee in cold water for 12 hours.

“The longer process extracts a uniquely distinctive flavor from the beans, delivering a rich, smooth coffee with an inherently sweeter flavor reminiscent of dark chocolate,” Cleaves says. “Cold Brew is delicious when enjoyed black, or it can be customized with flavors, dairy or sweetener.”

Starbucks has been infusing its nitro brew with a dark caramel sauce and topping it with dark caramel infused foam. The Nitro Freddo is available at more than 1,000 Starbucks locations this fall.

Roasting Flavor
Restaurant operators and coffee purveyors advise using darker roasts for the cold brew and nitro brew process because it takes longer to extract the flavor from the coffee, Ruocco says.

Gloria Jean’s Gourmet Coffees starts with 100 percent Arabica beans, but when it comes to adding flavors, the company uses a proprietary flavoring process during the roasting, says Martin Balcaitis, director of marketing. The beans are then steeped for 18 to 24 hours.

Gloria Jean’s, which has more than 900 stores worldwide, launched the flavored cold brew this summer, introducing the flavors of Apricot Cream and Blueberry Sunrise. For the fall, a pumpkin spice flavoring will be added to beans during the roasting. Winter flavors may include hazelnut and cinnamon.

The natural sweetness which occurs through cold brewing turns the flavored coffee into a real treat, Balcaitis says. “The flavor certainly comes through,” he notes. “It’s not that subtle.”

Customize
By using a variety of syrups, either house-made or supplied by a vendor, operators can encourage more coffee beverage sales by enabling customers to customize their cold-brew coffees.

The Flying Biscuit offers such flavors as vanilla, French vanilla, hazelnut, almond and birthday cake, Fuller says. Customers can mix and match flavors to be added to their drinks.

”We see all kinds of concoctions,” he says. “Just like with an omelet, they will customize it.”