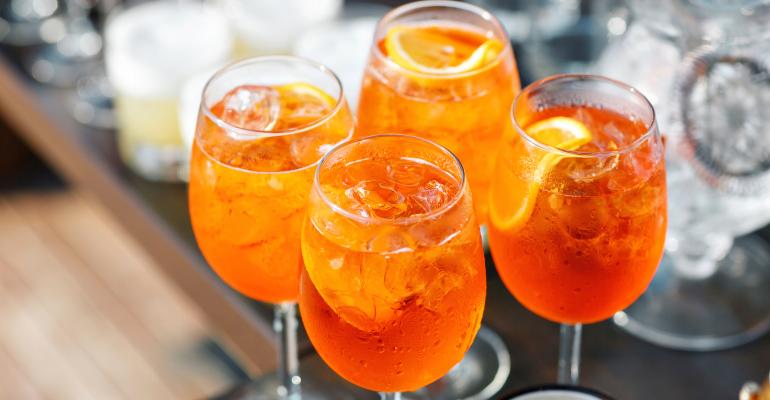 Catering to the low-alcohol crowd

Consumers are opting for lighter, refreshing drinks more suited to their active lifestyle.

You've probably seen the headlines about how Americans are sick of drinking, or how millennials are drinking less, or even how booze-free bars are the future of going out.

Despite what you may be reading, the truth is that all consumers are not swearing off alcohol. What is true, however, is that many are embracing flavorful, low-alcohol specialty drinks like spritzes, highballs and aperitifs that are cool, refreshing and more attuned to an active lifestyle than strong, spirits-forward libations. They are simple but stylish options ideal for sipping with brunch or lunch or at cocktail hour on the patio.

A sea of change in drinking

“We see a lot fewer ‘up’ drinks and a lot less base spirits on the rocks — not to say that those kinds of drinks are dying out,” says Richard Hanauer, beverage director for RPM Restaurants, part of Chicago-based Lettuce Entertain You Enterprises. “Coming in their place are more lively, effervescent and convivial drinks.”

“Our entire industry is flexing toward people drinking more in the daytime and less at night,” Hanauer adds. “There is a health wave sweeping across this nation that influences every bite and sip people take in restaurants. There is an absolute turn toward — I would not call it so much low-ABV [alcohol by volume] drinks — but rather a healthier, more interesting style of drinking.”

For many operators, the role model for this kind of drink is the Aperol Spritz, a combo of the Italian aperitif Aperol, prosecco sparkling wine, soda, ice and orange. At RPM Italian in Chicago, Hanauer features three signature spritzes, aptly dubbed R, P and M:

• The R spritz is an approachable, light and aromatic medley spiked with Italian    aperitif wine and a touch of cherry liqueur.

• The P spritz adds a mildly bitter, wine-based Italian amaro to the classic Aperol Spritz as a distinctive touch.

• The M spritz contains a dash of gin to make it sturdier and more welcoming to    gin and tonic fans.

“They are all spritzes to the core but with the flavor profiles tweaked to suit more drinkers,” says Hanauer.

The trend toward easy-drinking cocktails has been apparent for years at Bad Hunter, a vegetable-forward restaurant with a bar program built around low-ABV choices in Chicago’s Heisler Hospitality group. “The kind of light, afternoon drinks that people enjoy in Europe — Aperol Spritz in Italy, white port and tonic in Portugal, red wine and cola in Spain — are becoming popular in the states,” says Vinny Starble, Bad Hunter bar manager.

Bad Hunter will reopen this spring with a new series of signature spritzes after being shuttered by a kitchen fire last fall. New spritzes will Include:

• A white spritz made with a full-bodied and floral southern French white wine and semillon verjus for an acid component.

• A rosé spritz featuring an Italian rosé aperitivo, a dry French sparkling rosé and a touch of tonic and Malaysian rum for bitterness and backbone.

• A red spritz riffing on red wine and cola, the popular Spanish refresher, in this case based on root beer made with a housemade syrup of sassafras, allspice and honey.

Broken down to basics, a spritz consists of an aperitif or bitter amaro, sparkling wine and sparkling water. Vodka, gin, rum and other strong spirits are used in small doses as accents, if at all. The growing selection of high-quality flavored syrups, fruit purees and concentrates — including unsweetened concentrates that supply vivid flavor without sugariness — greatly expands the universe of creative touches.

More examples of low-alcohol specialties across the country:

Right now is a great time for operators to capitalize on the popularity of drinks that are tall, cool refreshing and low in alcohol. A growing number of consumers are seeking libations that they can enjoy in a responsible as well as convivial manner.