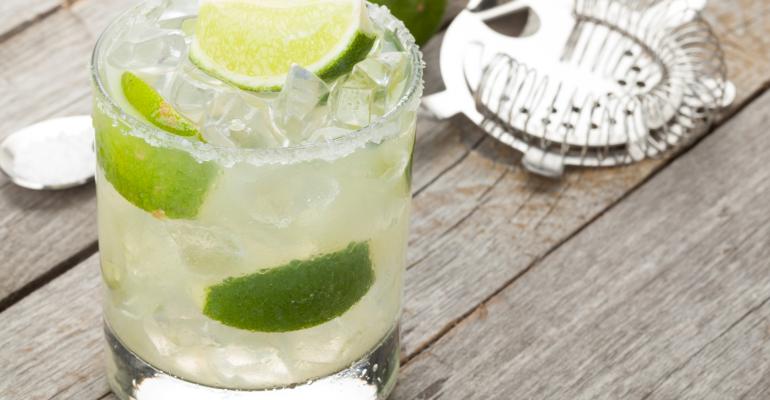 The margarita did not become America’s favorite cocktail by being one-dimensional. On the contrary, its strength is being many different things to many people.

For instance, consider the avocado — not your traditional bar ingredient but very on-trend in the world of food. It shines in the Morning Margarita, a brunch specialty of Tallboy Taco, a fast-casual Mexican taqueria inside Nacional 27, Lettuce Entertain You Enterprises’ modern Latin restaurant in Chicago. Avocado puree adds nuance and silkiness to a concoction of reposado tequila, triple sec, orange, yuzu, lime, egg white and mole bitters, served in a glass rimmed with a piquant and salty Mexican seasoning.

“One might question how well avocado goes in a margarita, until you taste it,” says general manager Elyse Fuller. “It’s our No. 1-selling brunch cocktail. If one person at the table tries it, the others tend to order it, too.”

Scanning cocktail menus, it is easy to find other riffs. They include skinny margaritas made with reduced-calorie syrups and “clean label” libations featuring organic spirits, all-natural margarita mix and flavored syrups made with real fruit and no artificial ingredients. Bartenders also customize the basic recipe with rum, brandy, sparkling Moscato and canned energy drinks

This knack for marrying ingredients may shed light on why the margarita topped the charts in the Nielsen CGA On-Premise Consumer Survey last year. Sixty percent of survey respondents chose it as their favorite cocktail, well ahead of the daiquiri, in second place at 44 percent.

There are a few principles for making a better margarita. “The No. 1 step is to use high quality ingredients,” says Drew Lucido, bar manager at Taste in St. Louis, a cocktail and small-plates bar in the Niche Food Group there. “Our lime juice is fresh. Cointreau is our triple sec. We use blanco tequila. All of the ingredients are done well.”

It is also key to follow standardized cocktail recipes and measure spirits with a jigger to ensure proper proportions, Lucido says. Also, it’s important to shake margaritas properly with good ice. Taste bartenders shake them with large, hard ice cubes from a high-performance ice machine, to ensure that the drink is correctly diluted, aerated and chilled.

Mastering the basics clears the path to innovation. A Taste signature cocktail called Who Killed Henry Brown includes lemon instead of lime and falernum, a rum-based preparation of lime peels, cinnamon and nutmeg. It is spiked with three spirits — mezcal, spicy tequila and sotol — the latter made from a desert plant related to agave. The result is a dryer, spicier, more nuanced take on the margarita.

Mixing margaritas with mezcal, tequila’s smoky cousin, “is definitely an increasingly popular option,” says Lucido. Also available for the asking at Taste are smoother reposado and anejo tequilas. But Lucido recommends blanco tequila, “which has the vegetal flavors which work best in this cocktail.”

At El Segundo Sol in Las Vegas, a casual taqueria that is part of Lettuce Entertain You Enterprises, the margarita’s versatility satisfies the varied tastes of the visitors who flock to the casino capital from all around the country.

That includes patrons who enjoy hand-shaken, on-the-rocks margaritas made with premium spirits and fresh ingredients as well those who prefer the refreshing chill, bright colors and festive flavors of frozen margaritas.

A notable example of the former is the blackberry margarita, garnished with plump, sweet seasonal berries. At press time, El Segundo was selling 50 to 75 of them per day. However, soon to take its place is the restaurant’s best-selling seasonal libation, the watermelon margarita.

Fans of frozen margaritas enjoy the Big Stick, a frosty libation with colorful splashes of melon, raspberry and blue curaçao liqueurs, and the Two-Tone Sangria — a frozen margarita with a colorful float of red sangria.

Showcasing diverse components and satisfying a wide public are what the margarita does best. Ross Buter, vice president of El Segundo Sol and Stripburger in Las Vegas and a partner in Lettuce Entertain You Enterprises, characterizes the margarita this way: “It’s about having great flavors and fresh ingredients and giving people a variety of choices.”