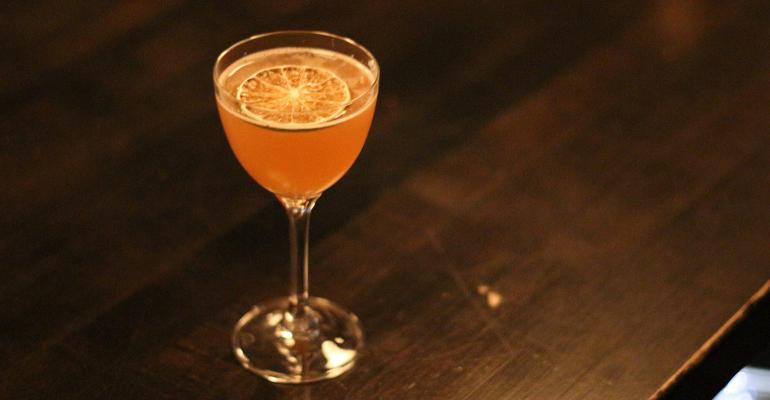 Bartenders find that the kitchen’s trash can be their treasure

Cross-use of ingredients is a boon to the bottom line

Bartenders are finding new ways to collaborate with the kitchen, using leftover herbs, peels and even avocado pits to inspire new drinks. The result is cocktails that not only reduce waste and cut costs, but also establish creative synergy between food and beverage menus.

Her kitchen theft started at Hank’s Pasta Bar, where the chef had a dish of burrata with roasted red peppers. The peppers’ skin and excess liquid were being discarded until Weinstein examined them.

So she mixed them with equal parts Aviation Gin, Sweet Vermouth and Campari and a signature cocktail was born. 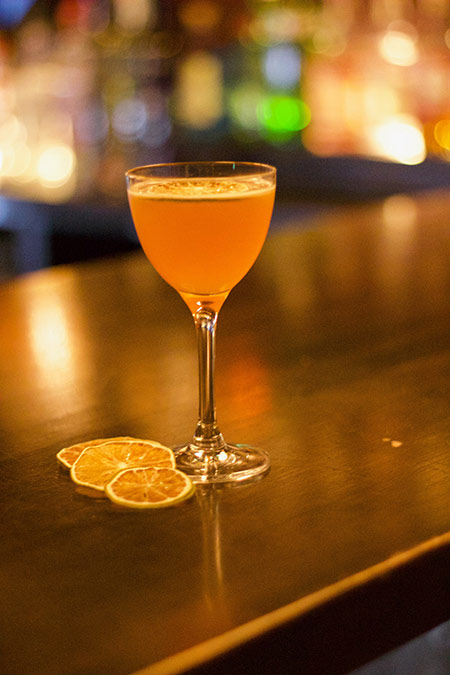 When she realized that using those peppers also could reduce her cost of goods, she started looking at what else she could swipe from kitchens. Soon she had created a whole section on her drinks menu called “Trash Humans,” in which something in each cocktail was repurposed. For example, in the Trash Gimlet, left, which sells for $12, trim from citrus garnishes are sweetened into a cordial and mixed with gin and bitters.

She also took avocado pits and turned them into orgeat, a syrup normally made from sweetened almonds and rosewater that is a key ingredient in Mai Tais. The cooks roast the avocado pits, and then Weinstein grinds them — a coffee grinder works, she said, or you can grate them with a microplane. She adds sugar, water and warm spices, such as allspice and cinnamon.

She said the resulting syrup has vanilla notes, “and toasty stuff.”

Another time, twenty pounds of rice were left over after the menu at Hank’s Cocktail Bar was changed. She made it into horchata.

“It’s pretty cool to look at stuff and say, ‘We could have thrown this out and we figured out a way to use it instead’,” she said.

In fact, she now mandates that each restaurant in the group must have at least one cocktail with recycled or upcycled ingredients.

An ounce of prevention

The creative use of food scraps comes amid increased awareness of the environmental impact of restaurant food waste as well as the potential savings that waste reduction can unlock.

The restaurant industry generates about 11.4 million tons of food waste annually at a cost of about $25 billion per year, according to a report from San Francisco-based non-profit ReFED earlier this year.

Preventing waste in the first place is a key way to combat the issue, the report said, noting that for every dollar invested in food waste reduction, restaurants can realize about $8 in cost savings.

Some companies and communities are working to address the issue. As of Oct. 1, restaurateurs in Austin, Texas, can no longer send unused food to landfills, and instead must donate or compost food waste, or face fines. And earlier this year, Chipotle said it would divert 50 percent of all restaurant waste, including food, from landfills by 2020.

At RiNo Yacht Club in Denver, located in the middle of The Source, a food hall and market, co-founder McLain Hedges scavenges from his neighbors for ingredients to be used in his drinks.

“This market hall as a whole is just a unique opportunity for us,” he said. “Since we’re in the middle and we don’t have a ton of storage, it really gives us the opportunity to work with the community in here.”

He, too, makes an orgeat variant with avocado pits, and this past summer he used his neighbors’ leftover corn cobs and husks, as well as peaches, to make a cocktail.

He juiced corn kernels and husks, and grated the cobs, to make a corn milk. He then cooked old peaches in it to make a sort of syrup that he added to summertime drinks. He also chars the husks and stores them in mezcal — “it adds a really nice, silky texture,” he said — and turns spent peaches and strawberries into a fruit leather that he uses as a cocktail garnish.

Joseph Boroski, who developed the bar menu for The 18th Room in New York City, also uses scrap to make an orgeat variant. He does it with popcorn that he recycles from the kitchen. He purées it with a few almonds to make a sort of popcorn-and-almond milk and then sweetens it.

The popcorn orgeat is used in The Kick! cocktail, which also includes a house blend of highland and Islay whiskeys, hickory smoked Irish whisky and lemon. That drink is $18.

As a general rule, Boroski asks the kitchen to show him what they have before throwing it out, and he does the same for them. So for his clarified Bloody Mary — for which he uses agar agar to push out the tomato pulp and leave the clear tomato water behind — he gives the pulp to the kitchen which turns it into mignonette for oysters.

The kitchen, in turn, gives him leftover fruit that the bar staff makes into an ever-changing Sangria — cobbled together from leftover by-the-glass wine — that is offered as an introductory freebie for guests, but that also can be ordered in a larger coupe.

For a cocktail called Two Bananas Walk Into a Bar, also $18, Boroski adds mashed bananas to rum and essentially fat-washes the spirit, infusing the banana flavor in the rum and then freezing it. That pushes out the solids while the oils in the banana remain, changing the flavor while also giving the rum a fuller mouthfeel. That spirit is used as the base for a banana daiquiri.

The remaining “rummy bananas” go back to the kitchen and are made into tasty banana bread. 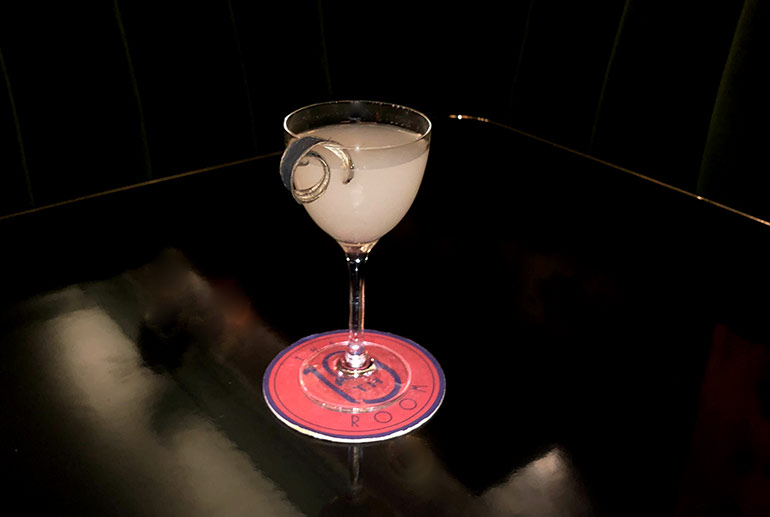 Boroski also sweetens and dehydrates the banana peels and uses them for garnish.

Boroski said he didn’t look at it from a cost perspective, “But it’s really good for cost.”

“It saves money, obviously, but it’s also so much better than using just banana for banana bread,” he said. “I think it really should be part of our restaurant culture. There are so many great things that are just thrown out.”

Larger chains also are finding the value in cross-utilization of kitchen and bar ingredients. 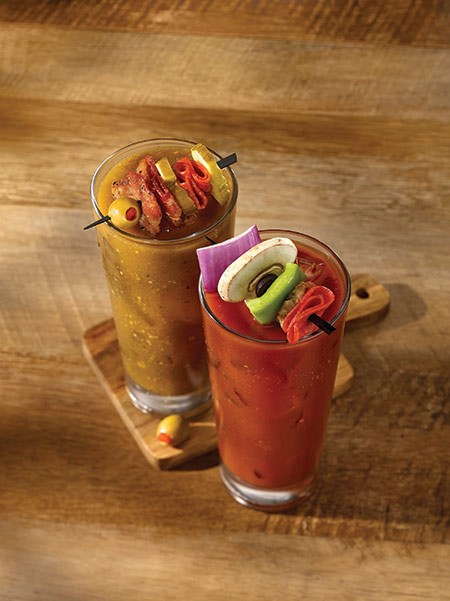 Craftworks is also the parent of Rock Bottom Brewery and several single-unit restaurants.

“The easiest one for most restaurants to do is the Bloody Mary,” Melia said.

At Old Chicago, he derived a Bloody Mary from the chain’s popular pizza, the Chicago 7, which is topped with pepperoni, black olives, green peppers, Italian sausage, red onions and sliced mushrooms. (Cheese is the seventh ingredient, according to director of beverage operations Jonny Stringer). Those same ingredients are skewered and used as a garnish for the Chicago 7 Mary.

Melia said it’s the most popular Bloody Mary in the restaurant.

“It’s got that visual appeal of the skewer on top. People see it when it goes by and say, ‘I want that’,” he said, noting that it’s also “very Instagrammable.”

Old Chicago’s green tomatillo salsa, along with garlic, cucumbers and jalapeños, all from the kitchen, are used in the Green Tomatillo Mary that’s being featured at Old Chicago for football season.

The Bloody Marys are priced at around $7, depending on location.

“We’re always looking to bring the bar into the kitchen and the kitchen into the bar,” said David Spirito, senior director of food and beverage innovation at TGI Fridays. “It makes it a lot easier for the operator to bring in one really cool ingredient and use it for multiple purposes,” he said.

Of course, it doesn’t always work.

Spirito used cotton candy for a cocktail called the Pink Punk Mojito, “but it looked kind of weird with food,” he said. The drink is priced between $6 and $9, depending on location.

Ditto for Pop Rocks which tested well on desserts, “but our guests didn’t feel they fit in the cocktails.”

It can be challenging flavorwise, too.

“Sometimes you go too far with savory [in cocktails], and same thing in the culinary world with too sweet,” he said.  “We have some successes, but with any success you’re going to have failures.” 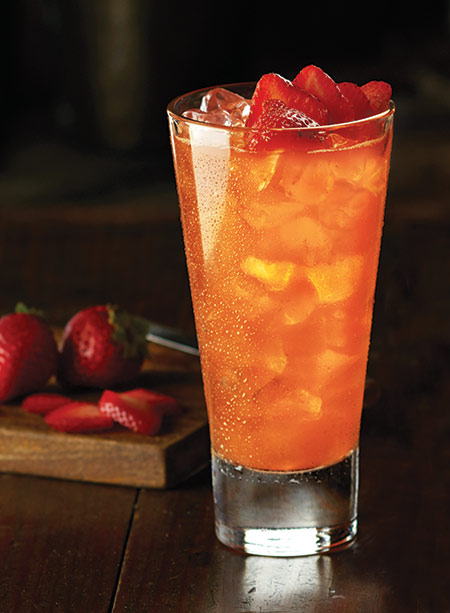 One of those successes is the Strawberry Henny, left, priced between $7.99 and $10.99, depending on location. It's made with Hennessy V.S. Cognac, Grand Marnier, sour mix and garnished with strawberries initially purchased for the chain’s signature Strawberry Fields salad.

Limited-time drinks have included The Ultimate Bloody Mary, garnished with a cheeseburger slider. Limited-time salads, as well as a bánh mì sandwich introduced a couple of years ago, have been dressed with mint from the bar’s Mojitos, Spirito said.

“We really try to stay with who we are and not go too out of bounds,” he said. “But it’s nice to have a garnish that we can use in both areas.”