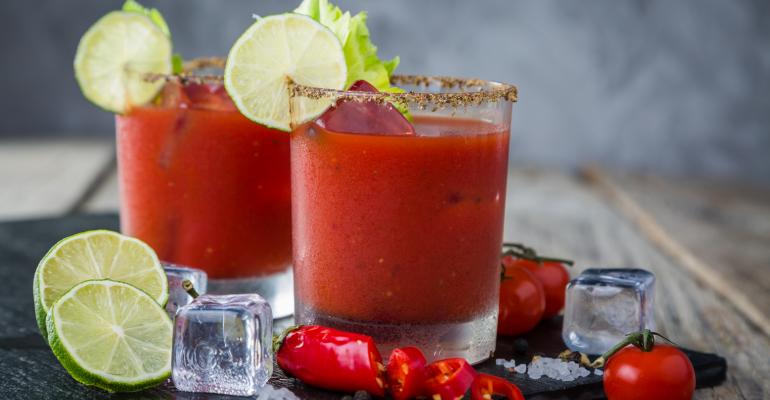 Growing usage of “fifth flavor” spilling over from the kitchen into the bar.

Food writers are known for describing flavors with a bottomless supply of words. But ask them to describe umami, a Japanese term at the root of what many call “the fifth flavor,” and a limited response is guaranteed. Though experts can taste umami, they often perceive it in a very personal way — knowing that it’s good, exciting and a bit mysterious.

Thankfully, that’s not stopping chefs and bartenders from adding ingredients known to deliver umami to many foods and even cocktails. Sometimes that takes effort, such as coaxing umami from kombu (a member of the kelp family) when making dashi (the base for miso soup). Other times, adding umami is as simple as sprinkling a few drops of concentrate into a preparation for easy, pinpoint pizzazz.

What’s important, says Chef Michael Gulotta, is to understand umami as a go-to ingredient that adds instant complexity to any dish.

“I love adding doubanjiang to just about anything,” says Gulotta, whose two restaurants, Maypop and MOPHO, are in New Orleans. Made from fermented broad beans, doubanjiang “will add that instant umami kick to whatever you’re preparing. Toss it with fresh fruit and torn herbs as a perfect condiment for grilled meats, or stir a little into your favorite broth.”

Not altogether familiar with the term umami? You’re not alone. For centuries, human tastes have been confined to the boundaries of sweet, sour, salty and bitter. Yet for years some have argued for the recognition of a fifth flavor, a vague ingredient described by some as “round” or “all-encompassing,” by others as a go-between/gap-filling/not-easily-distinguished “tang.”

It took the work of Japanese chemist Kikunae Ikeda, who, in 1908, determined that this mystery flavor was born of glutamic acid and its chemical kin, glutamates. Dried and used as seasoning, we know them as monosodium glutamate (MSG), a potent flavoring common to Asian cooking. Ikeda named the flavor umami, which, when translated, means, vaguely, “deliciousness.”

Easier to taste than describe

Bobby Benjamin, chef-owner of Butchertown Grocery in Louisville, Ky., says umami appears on his palate somewhere between salty and acidic.

“Umami is easier to taste than it is to describe,” says Benjamin. “For me, it’s hard to say that the flavor of a single element like Parmesan cheese is umami because I find what a lot of chefs would call umami is in so many other flavors, like meat or fish sauce — neither of which tastes like Parmesan.”

But combine Parmesan, tomato and mushrooms — all known for their umami characteristics — and “you get a whole new dimension of flavors,” Benjamin says. “That’s what I mean about umami not being a singular flavor.”

Many sources of umami

Now many chefs and bartenders are digging deeper to find other naturally derived sources of umami, among them seaweed, mushrooms, bonito flakes, dried fish, oysters, Parmesan, pork, beef, green tea and many more.

That umami’s flavor is sometimes described as “meaty” has made the term easy to use in restaurant names such as Umami Burger, a 25-unit Los Angeles-based chain that tops its burgers with powerfully flavored amendments like truffle cheese, bacon lardons, miso and mustard spread, Parmesan frico and gochujang glaze.

Experiments at the bar

Recently, the bar has become the hot spot for umami experiments. According to Jacquelyn Zykan, a longtime mixologist turned master taster for Old Forester Bourbon, the bartender’s little secret of using a bit of salt in batched cocktails to brighten flavors is a good first step toward creating an umami hint in a drink. But she says there’s more to be done.

“When I travel to bars, I’m seeing so much being done to make cocktails taste, in many ways, like food,” Zykan says. “Bartenders are reaching for more savory flavors we’d normally think of as being found in food.”

Few savory drinks have experienced as much experimentation as the Bloody Mary. Already chockful of known umami ingredients such as tomato and Worcestershire sauce, the multi-ingredient concoction is rife for further experimentation such as the addition of a few drops of Monin Umami Concentrated Flavor. The same goes for old standards such as the dirty martini which, when blended with cold spirit and olive brine, becomes deeper and uniquely savory.

Bartenders also are finding naturally existing umami flavors in heavily peated Scotch and some mezcals, spirits viewed by some as off-putting, but widely regarded for their complexity, earthiness and inherent brine notes.

At Range in Washington, D.C., bartenders make a cocktail called the Vegan Sacrifice by blending smoky Scotch, ginger and cayenne. Ironically, the “vegan” cocktail is chilled with house-made “meat ice” made from a meat and vegetable stock that’s clarified and frozen into cubes. At Neta, a bar in Manhattan, Suntory Hakushu Japanese is infused with bonito flakes and blended with other Irish and Japanese whiskeys in the Severed Anchor cocktail. The drink is garnished with a flower made of bonito flakes, a widely recognized source of umami.

“We like to have fun with our drinks here,” Hall says. “For us, it’s about bright and engaging flavors.”