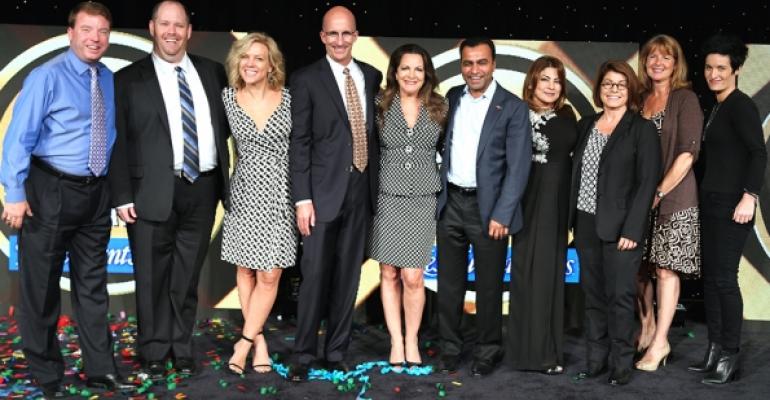 This is part of Nation&rsquo;s Restaurant News&#39; special coverage of the 2015 MUFSO conference, taking place Sept. 20&ndash;22 at the Hyatt Regency at Reunion Tower in Dallas. Follow coverage of the event on NRN.com and tweet with us using #MUFSO. Stay connected on the go by downloading the MUFSO app.

Julia Stewart, chair and CEO of Applebee’s and IHOP parent DineEquity Inc., was named Operator of the Year at the 2015 MUFSO conference on Monday.

A 40-year veteran of the restaurant industry, Stewart started out as a server at IHOP when she was 15. She now helms a franchise operation that includes more than 3,600 restaurants globally under the Applebee’s Neighborhood Grill & Bar and IHOP brand banners, representing nearly $8 billion in sales.

This is Stewart’s second year receiving a Golden Chain award. She was also a winner in 2004 as president and CEO of IHOP.

Stewart described leadership as an “honor and a privilege,” crediting the “magic” in her career to “being able to do what I love to do and working with these incredible, incredible people.”

Her love affair with the restaurant industry began when she was working for an IHOP franchisee in San Diego at age 15, though she joked, “I’m supposed to say I was 16 because I think 15 was illegal.”

She continued working for restaurants while in college and found she loved the daily feedback, “the good and the bad, and telling us how we could do a better job and guests talking to us every day about what they loved and didn’t love,” she said. “I fell in love. I’ve never wanted to do anything else but be in the restaurant business.”

In 2001, she was named president and chief operating officer of IHOP Corp., rising to the role of CEO in 2002.

Five years later, however, she was back at Applebee’s — this time with a $2.1 billion deal to acquire the casual-dining chain. Naming the newly formed company DineEquity Inc., based in Glendale, Calif., Stewart set out to transform Applebee’s into an all-franchised brand with an asset-light model, like IHOP. Applebee’s achieved this goal earlier this year.

Both IHOP and Applebee’s are market leaders in their respective segments. According to NRN’s Top 100 census, Applebee’s was the No. 1 casual-dining chain in fiscal 2014 with $4.6 billion in U.S. sales. IHOP topped the family-dining category in 2014 with U.S. sales of $2.9 billion.

Stewart has led an ongoing revitalization of both brands.

Applebee’s second-quarter domestic same-store sales climbed a more modest 1 percent, and the company is working to apply some of the same strategies at Applebee’s that helped build momentum at IHOP, including improving the food and menu, honing the guest experience and marketing.