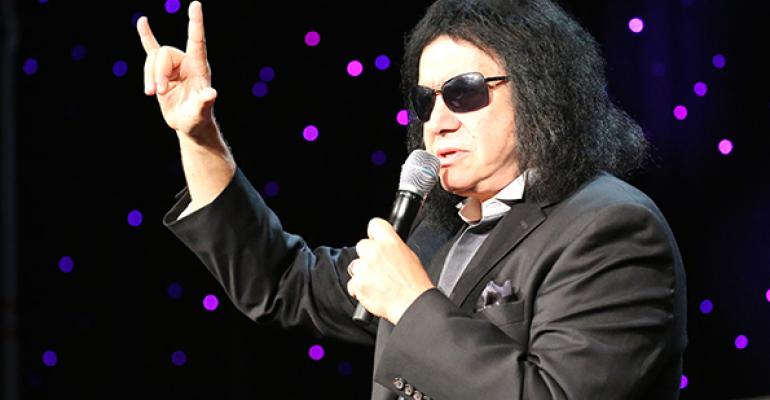 This is part of Nation&rsquo;s Restaurant News&#39; special coverage of the 2015 MUFSO conference, taking place Sept. 20&ndash;22 at the Hyatt Regency at Reunion Tower in Dallas. Follow coverage of the event on NRN.com and tweet with us using #MUFSO. Stay connected on the go by downloading the MUFSO app.

Rock star and restaurateur Gene Simmons regaled MUFSO attendees with tales of his childhood in Israel and Brooklyn, N.Y., and his invention of the three-fingered rock-and-roll salute as he walked among the audience looking for high-powered people to be franchisees of his casual-dining concept, Rock & Brews.

“We are looking for the few, the proud, the committed,” Simmons said as he asked attendees who among them thought they were “big dogs,” who could open and operate franchises of his rock-themed restaurant, which opened its first location in 2012 and is slated to have 15 units by the end of the year.

Simmons, a serial entrepreneur and co-founder of the rock band Kiss, praised the United States and its musical invention, rock and roll. He said the genre had an energy that people recognized.

Simmons said that was why “Rock” is the first word in the restaurant’s name, because it energized people and made them feel passion.

“Everyone uses that word. Inflation is coming to that word,” he said. “But when you meet somebody who’s got a zest for life and can’t wait to shake your hand and look you in the eye and make you feel like you’re important, that’s passion.”

Passion and energy are what people are looking for when they go out to eat, he said.

“People don’t have to go out and eat. They can stay at home … and watch TV. If you’re just going to give them food when they come to your restaurants, you’re fools,” Simmons said.

He added that he knew that MUFSO attendees were smart, because they had come to a conference to exchange ideas and learn.

“You’re big players and stuff, but you still come here to do what perhaps you haven’t done,” he said.

The only child of a Hungarian survivor of the Holocaust, Simmons was born poor in Israel about six months after the country’s independence in 1948.

“I never saw a toilet. We never saw tissues or toilet paper. I never saw canned food, didn’t know about brands,” he said. “We didn’t have radio and had never heard of television.”

Simmons and his mother came to the United States in 1958, he said, and achieved the American dream.

That dream defied logic, Simmons said, that it would be understandable if people already living in the United States for generations said to immigrants, “Please wait at the back of the line. We’ve been here hundreds of years. I should be at the head of the line for opportunities for all kinds of stuff.”

Instead, everyone is given equal opportunity, he said, “which is why I’m standing here before you."

Simmons later added that he never imagined that the first guy he met in the United States, in the Brooklyn, N.Y., neighborhood of Williamsburg, “who beat me up because I couldn’t speak English … would later be working for me,” he said. “That’s revenge.”

Simmons now owns a football team — the L.A. Kiss — as well as a Kiss golf course in Las Vegas and 5,000 licensed products, from condoms to caskets.

Simmons noted that his music came from a place of love. He said he invented the three-fingered rock salute — thumb, index and little finger extended — because he wanted those three fingers to symbolize the words “I love you,” which is what he wanted to tell his fans.

Fans came to Kiss concerts not just to hear songs that they like, but for a show, and they come to restaurants for the same reason, he said.

“Once they walk into your restaurant, you’re on,” he said.

All MUFSO attendees were offered an autographed copy of Simmons’ latest book, “Me, Inc.”