/sites/all/themes/penton_subtheme_nrn/images/logos/footer.png
Recent
Recent
Starbucks to exit Russia over Ukraine war
May 23, 2022
Pandemic sparks new growth for Ben’s Friends, an industry-specific community for those seeking sobriety
May 22, 2022
Here’s why Cali BBQ thinks restaurants should evolve into multimedia brands
May 22, 2022
NRN editors discuss the food, technology and sustainability trends from Day 1 of the restaurant show
May 21, 2022
NRN editors discuss Chicago food, labor challenges, changing dayparts and the NRA show
May 20, 2022
Featured
Tech Tracker: Toast launches POS solution for quick-service restaurants
May 17, 2022
Meet 4 emerging NYC concepts
May 16, 2022
Memphis Seoul brings Korean BBQ and Southern cooking to Brooklyn
May 11, 2022
Executives on the move: 13 restaurant leaders with new positions in April
May 03, 2022
MUFSO
brought to you by 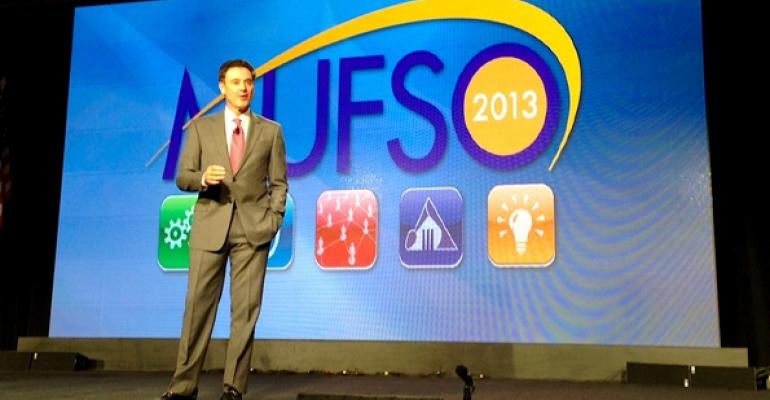 This is part of Nation Restaurant News&#39; special coverage of the 2013 MUFSO conference, taking place Sept. 29-Oct. 1 at the Hyatt Regency at Reunion Tower in Dallas. Follow coverage of the event on NRN.com and tweet with us using #MUFSO.

Success comes to those who focus and listen, winning basketball coach Rick Pitino said in the closing keynote address Tuesday at MUFSO.

Pitino, who led the University of Louisville Cardinals to the 2013 NCAA men’s basketball championship, spoke on the day his new book, “The One-Day Contract,” was published.

“The most important thing you can have is humility,” said the 61-year-old coach. “As a leader, whatever industry we are in, we have to have humility.

• What’s hot, what’s next on restaurant menus
• Ray Blanchette of Joe’s Crab Shack named 2013 Operator of the Year
• Stay connected on the go with the MUFSO app

“It teaches us to master the art of communication, which is the ability to listen four times the amount you speak,” he said. “When you listen, you find out how to motivate people.”

That helps teams execute at the highest level possible, said Pitino, who also coached at Boston University, the University of Kentucky and Providence College, as well as professional NBA teams the New York Knicks and the Boston Celtics.

Pitino said he wants his players “to have a PHD” — passion, hunger and drive.

“That PHD means they have to have humility,” Pitino said. “If ego comes into play, you don’t have the ability to listen.

“Ego is the greatest killer of one’s potential,” he continued. “I tell my players it stands for Edging Greatness Out. When you have an ego, you think you’ve arrived. You take your competition lightly. You don’t strive to be the best in a one-day contract. You don’t listen as much.”

However, he added, if one has passion, hunger and drive in each one-day contract signed with yourself, “each and every day, you’ll be upbeat, positive people with incredible energy.”

Pitino also took a dim view of technology and its demands on everyone’s time.

He said he asked his players how many hours a day they spend on social media, and the average was four hours a day.

“I asked them, ‘Of those four hours a day, how many of you are doing something significantly constructive with those four hours?’” Pitino recalled. “Not one person raised their hand.”

While many people are “trapped by technology,” he said, part of the one-day contract is to remain upbeat and positive and use it as a “meaningful distraction.”

Pitino acknowledged that not everyone can be on top of their game every day.

“There will be meaningful distractions in the tough game of life,” he said. “I have them all the time. If I have distractions, I do something about it. I’m totally aware of that.”

“Positive people always get through adversity,” he said. “Cynical, moody people struggle with it all the time and make the problem bigger.”

The keynote address was sponsored by Red Book Connect.