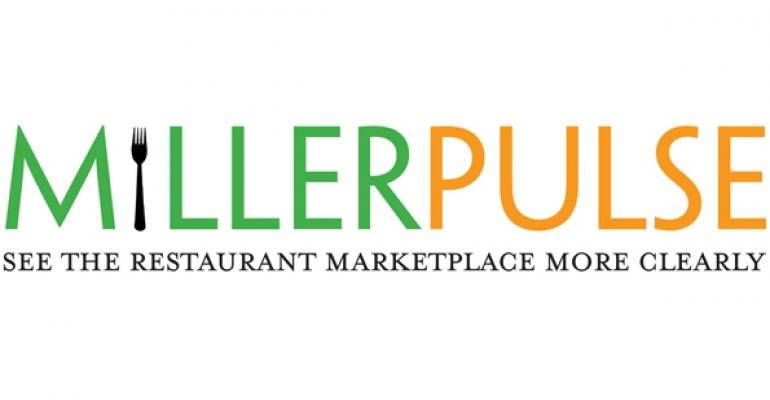 Restaurant sales reach 2013 high in May

Restaurant industry same-store sales reached their highest level for the year in May, driven by strong performances from the fine-dining and fast-food segments, but operators remain wary of the impact of the health care law, according to the latest NRN-Miller Pulse survey.

MillerPulse, an operator survey exclusive to Nation’s Restaurant News, questioned operators from 50 restaurants in June regarding May sales, profit trends, performance and outlook. Respondents included operators from all regions of the country that represent the quick-service, casual-dining, fine-dining and fast-casual segments. Those surveyed in June represented restaurants that booked about 16 percent of industry sales.

Industry same-store sales rose 2.5 percent in May, an improvement from the 1.8-percent increase reported in April. Even more importantly was the improvement of the two-year sales trend, said Larry Miller, restaurant securities analyst at RBC Capital Markets and creator of the monthly MillerPulse surveys. 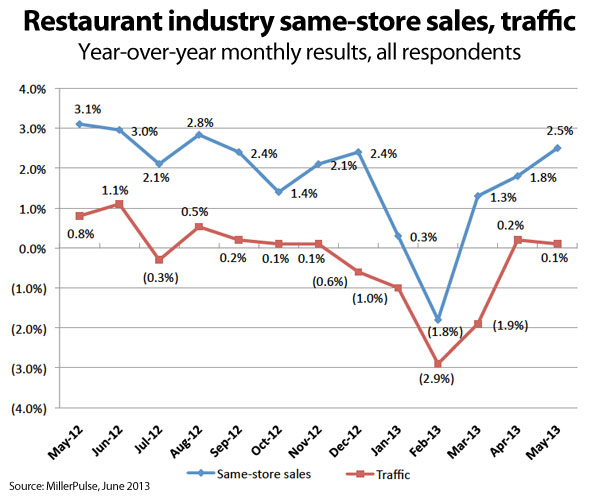 “The two-year sales trend also improved to its highest level of the year, suggesting there may be more behind the gain than easy comparisons,” Miller said.

Traffic also increased 0.1 percent across the industry in May. Though marginal, it was only the second month in the past six months that traffic was positive, Miller noted.

The survey also found that operators across all segments — fast-food, fast-casual, casual-dining and fine-dining — were optimistic about June sales, as well as their outlook for the next six months. That optimism is paralleled by a rising consumer confidence. 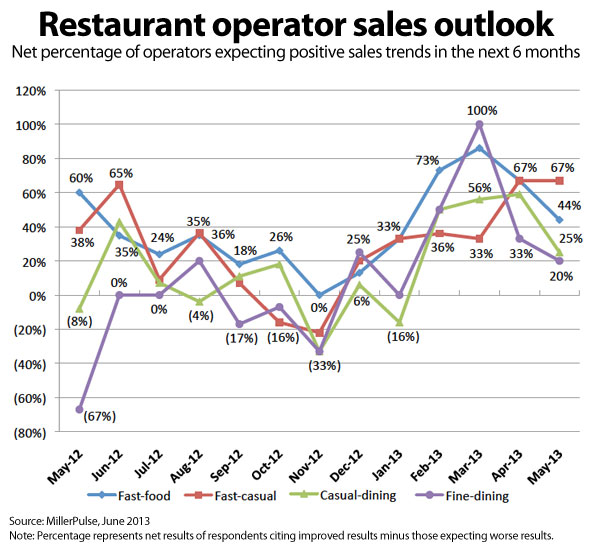 “We view the surge in confidence as being more sustainable since it was fueled by strength in jobs and housing and these tend to bolster disposable income and wealth,” he said.

Despite rising sales and increased confidence, there is substantial concern surrounding the health care law, much of it stemming from operator confusion on how to implement the law and uncertainty surrounding what its impact will be on restaurant profitability. Initially, restaurant companies predicted that the law would hurt profit margins, but earlier this year, reduced “opt-in” assumptions and a low penalty price for not having insurance in 2014 helped mitigate cost concerns. However, it seems that restaurant operators are reverting back to their initial feeling that margins could take a hit.

“We asked operators to estimate the cost impact of health care again this month,” Miller said. “The results were more in line with initial estimates, averaging 1.5 percent, which if accurate could mean unhealthy earnings in 2014.”

Healthcare concerns aside, Miller shares the operator and consumer confidence.

“The tide appears to be rising, which when combined with a muted outlook food cost, bodes well for restaurant company earnings.”