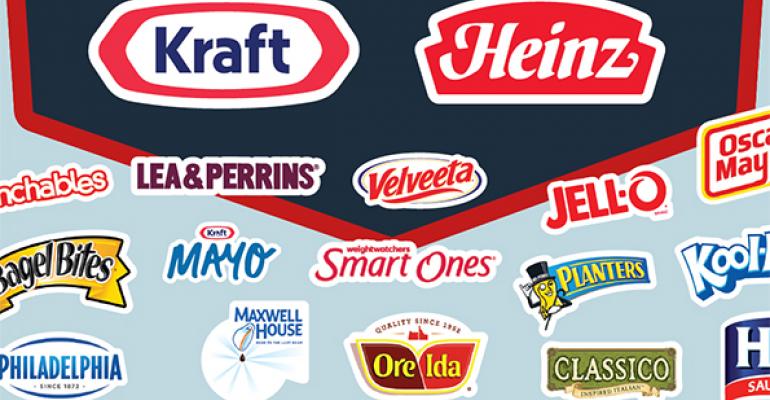 What the Kraft–Heinz merger means for restaurants

Combined company could ignite more mergers in the foodservice industry

The merger of Kraft Foods Group Inc. and H.J. Heinz Co., announced Wednesday, could have far-reaching implications for the restaurant industry.

Beyond giving Kraft access to Heinz’s considerable strength in using its foodservice business as a brand builder, the deal could ignite a long-awaited consolidation among food manufacturers, according to some analysts.

“We’ve been saying it for years: The food industry is slow to consolidate,” said Gary Stibel, founder and CEO of the New England Consulting Group, a marketing management consulting firm that works with packaged goods companies and restaurants, among others. “Now it’s happening. And you will see it happen very quickly.

“You don’t want to be the last guy to choose a bride, when the pickings get slim,” he added.

The combination of Kraft and Heinz could create a packaged foods behemoth — the third-largest packaged food company in the country and the fifth-largest in the world.

The combined company, to be known as the Kraft Heinz Group, would have $28 billion a year in revenue and eight brands each worth $1 billion or more.

Kraft Heinz could compete more aggressively for business with the restaurant industry by using its expanded size to sell more products to restaurants.

Heinz is best known for its ketchup, but it also sells mustard and other condiments, as well as soup and other tomato products. Kraft sells a host of products including Philadelphia Cream Cheese, Kraft Macaroni & Cheese, dressings and Grey Poupon Mustard.

Stibel noted that Heinz is a traditionally strong player in the foodservice business. It is one of the few companies that has placed its products prominently in many cases at both quick-service restaurants and top-tier fine-dining establishments. Its prominence builds brand equity and markets the brand, he said.

“There are few brands where you’ll see them everywhere from a mom-and-pop pizzeria to a five-star restaurant,” Stibel said. “And they’re almost embarrassed not to have Heinz ketchup.

“Most restaurants could change their brand of mustard without anybody noticing. You can’t do that with ketchup,” he added.

Kraft also has a strong foodservice business, although its products aren’t featured as prominently.

“Kraft has been no slouch, but it is less of a priority for the brand,” Stibel said.

Stibel doesn’t expect the combined company to use its leverage to raise prices, noting that both brands are already large enough to command the prices they want. Still, “The combination will be far more powerful, but also far more efficient. They’ll take a lot of costs out,” he said.

Food companies have been increasingly licensing restaurant brand names to sell products at grocery stores, a trend not expected to diminish any time soon, said Bill Cross, senior vice president of business development for the Broad Street Licensing Group, which works with both food manufacturers and restaurants on licensing deals.

Food makers like using restaurant brands because it lets them offer a new product without the traditional costs associated with such a launch — such as building brand equity.

Kraft Heinz will be controlled by 3G Capital and Berkshire Hathaway, and will use 3G’s playbook at Kraft, which includes emphasizing efficiency. Licensing restaurant brands fits that goal, Cross said.

Heinz has licensed the TGI Fridays brand to sell products in grocery stores, such as mozzarella sticks. In the past, Kraft has had deals with Starbucks and California Pizza Kitchen.

“It’s definitely going to impact the restaurant licensing business,” Cross said. “I think in the long run it will good for that business.”