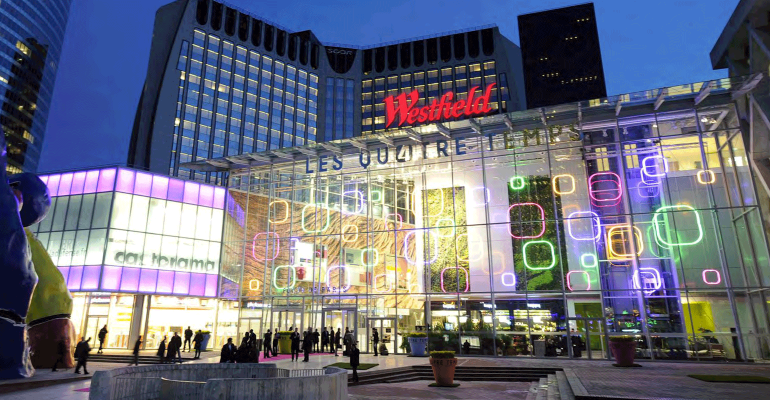 Westfield agrees to $16B buyout by France’s Unibail

The deal creates a commercial landlord juggernaut worth about $72 billion and comes at a time when malls are under great pressure for reinvention as online retailers continue to take market share.

Unibail will swap 0.01844 share of its stock, plus $2.67 in cash for each share of Westfield. That values Australia-based Westfield at 10.01 Australian dollars, or $7.55 per share. It’s a 17.8 percent premium over Westfield’s closing Monday price on the Australian Securities Exchange.

Unibail-Rodamco itself was created in a merger of France’s Unibail and Europe’s Rodamco in 2007, and Tuesday’s deal gives it a foothold in malls that have put dining at the forefront of the new mall experience.

And a reimagining of restaurants has been a main part of increasing the length of time shoppers spend on the property.

So, it’s goodbye to the food court and hello to dining terrace or the urban bistro.

The aim to completely replace the experience of eat and run at the food court to one where guests linger. And the dining runs from fast food to destination eateries with an eye toward popular local names.

In 2016, Tuscan-farmhouse themed chain Il Fornaio decided to open a new location at The Village at Westfield Topanga in Woodland Hills, Calif.

“We think because of the visibility in this center and the amount of people and offices in the area, this will be above our unit average,” Michael Mindel, senior vice president of marketing at Il Fornaio, said at the time.

At Westfield Century City, there is Shake Shack, Eataly and a highly anticipated future opening of Din Tai Fung, known for long lines for its soup dumplings.

And at the Westfield Garden State Plaza in Paramus, N.J., the biggest mall in the state, Westfield announced at the beginning of 2017 it was completely revamping the food court. In addition to new furniture and fixtures, there were art installations and video screens (to compensate for an absence of a view on the lower level) and a Jersey Shore-themed play area when it opened in the fall.

While initially the restaurants were the same as the earlier food court, South American restaurants Salsa Arepa opened its first location at the mall in November.

When the deal is completed, the newly formed company will have 104 prime assets in 13 countries.