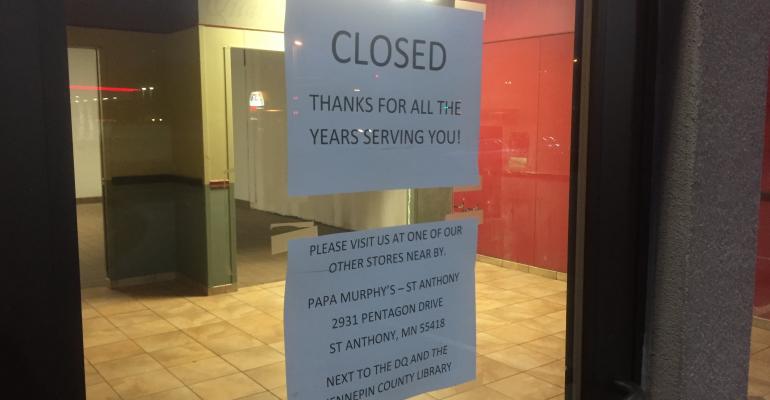 Restaurant sales have been weakening since January 2015, thanks mostly to worsening traffic in a competitive environment.

This has led to a natural result: store closures.

Publicly traded chains have announced the closure of more than 350 locations just this year.

And it’s not just closures. Zoe’s Kitchen Inc., stung by same-store sales declines that include a 3.8-percent decrease in the quarter ended July 10, is slowing development next year even though units “are performing in line with” expectations.

“We expect to moderate our growth next year to 25 to 30 new restaurants in 2018 as we balance our new store growth plans and continue to focus on building brand awareness and traffic within our existing footprint,” CEO Kevin Miles said on the company’s earnings call earlier this month.

Potbelly Corp., meanwhile, is looking at “the pace of our company-owned unit growth” as it analyzes all aspects of its business strategy, interim CEO Mike Coyne said earlier this month.

That follows news that Applebee’s could close up to 135 locations amid the worst sales crisis in the brand’s history. Its same-store sales are down 7 percent in the first half of the year.

Joe’s Crab Shack, meanwhile, closed 40 locations in recent months, and could close more, after its sales problems and financial losses led to a bankruptcy earlier this year.

But they’re not the only ones. Limited-service chains aren’t immune to the problems afflicting the industry — as the slowdown at Zoe’s and the analysis at Potbelly show. Several limited-service chains have closed locations, facing the same issues with traffic and sales.

This is a limited list of chains closing locations. But it demonstrates that sales and profit problems are putting pressure on industry executives to improve their finances, as well as their same-store sales.

Industry traffic has fallen 27 of the past 30 months. Reasons for this decline include retail traffic weakness, which is hurting chains that built around retail developments, as well as cheaper grocery prices.

But supply has long been an issue. Restaurants have been aggressively expanding in recent years, with newer concepts growing with fuel from investors and existing concepts looking to increase revenues and profits. Restaurants added about 18 new locations per day in the six years through 2016.

That’s a hefty amount of competition, in addition to competition from convenience stores and grocers selling prepared food.

For the chains themselves, closures could divert more traffic and sales to other locations, while freeing them from troublesome, money-losing units. Several chains have used closures as springboards to success.

Others, however, have only struggled as the closures decrease a chain’s presence and marketing and advertising ability.