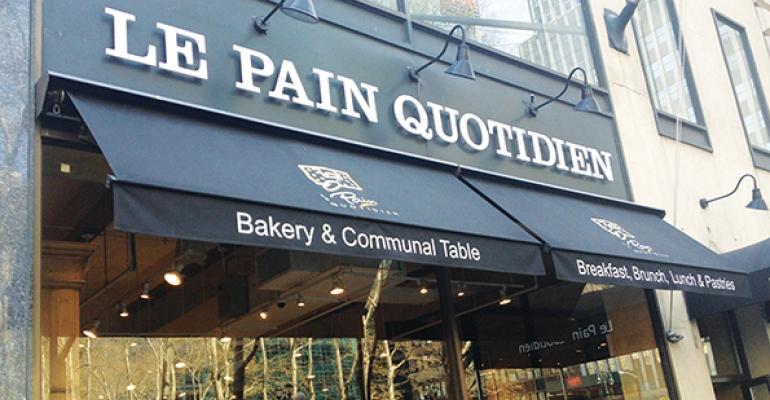 Aurify Brands LLC may reopen 40 units of Le Pain Quotidien by Mid-July that had previously closed during the chain's bankruptcy filing.
Finance>Mergers & Acquisitions

The remaining 58 locations of the bakery-café chain in the U.S. will remain closed permanently

New York-based Aurify Brands LLC hopes to reopen more than 40 shuttered locations of Le Pain Quotidien as soon as mid-July after acquiring the locations out of bankruptcy in a deal that closed Tuesday.

Aurify Brands — which operates The Little Beet, Melt Shop, Fields Good Chicken and manages franchised locations of Five Guys Burgers and Fries — initially had bid $3 million to pick up 35 Le Pain Quotidien locations across the U.S. But the store count grew to include another five or so locations across seven states, said Andy Stern, Aurify’s co-CEO.  The company may still come to terms on another five to 10 locations, he added.

Under the deal, Aurify agreed to provide $522,000 in bridge financing and to assume certain liabilities. Aurify will assume the master franchising rights to the brand in the U.S.

PQ New York Inc., which operated 98 Le Pain Quotidien restaurants in the U.S., filed for Chapter 11 reorganization in May. The chain, which is based in Belgium and once included nearly 300 units worldwide, was struggling even before the pandemic.

It is owned by a holding company renamed Brunchoco21 that includes Le Pain Quotidien Belgium and France, with a production facility, branding rights and contracts for American and British operations. An investment firm M80 holds a majority stake in that business and is working on a new prototype, Stern said.

Meanwhile, Aurify plans to revive the brand as restaurants reopen after the pandemic-related shutdown.

“The whole attraction here was the brand. We think it’s one of the best brands in the industry and it’s got tremendous opportunity,” said Stern.

Stern said the company hopes to rehire about 1,200 former workers of the 2,500 who were laid off when the restaurants closed in March.

The plan is to reopen units for dine-in as local regulations allow, or at least for takeout and delivery if dine-in service is not possible, said Stern. The company plans to work on the concept, but Stern said it’s too early to say what might change.

“We’re trying to reinvest in what the guest experience used to be,” said Stern. “It’s super important to get all the facets right, from the coffee program to the service style and even the music,” which could return to classical and jazz to encourage guests to stay and hang out.

Le Pain Quotidien was known as a pioneer of communal tables, however, and Stern said they haven’t decided how those might be modified for pandemic dining, or whether they might be removed.

Taking on the Pain Quotidien locations will expand Aurify’s reach to the West Coast for the first time. The 40 or so locations are in New York, Connecticut, Maryland, Virginia, the District of Columbia, Florida and California.

Aurify currently operates mostly in New York, but has no restaurants further west than Minneapolis.

The company is also continuing to look for acquisition opportunities, he added. The company’s existing brands will also return to their growth trajectory as dining rooms open up again.

Stern said the pandemic may force some operational changes — restaurants may get smaller and off-premise will likely have a larger presence, for example.

Fields Good Chicken is testing direct-to-consumer sales of pre-brined and marinated raw chicken to cook at home, for example, and Melt Shop is expanding its menu with virtual brands, including wings, Philly cheesesteaks, burgers and chicken sandwiches on a bun

“We strongly believe the restaurant business is coming back, it’s just a question of when,” said Stern. “The luxury of our industry is knowing that people have to eat.”